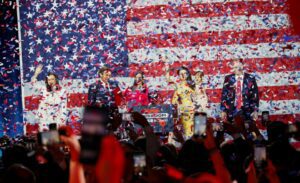 By the end of the day on Election Day, 47 percent of eligible voters in the United States had cast a ballot in the 2022 midterm elections.1 After a week of waiting with several races still uncalled, heading to a runoff, or requiring a recount, it looks like Republicans will have a slim majority in the House of Representatives and Democrats will keep control of the Senate.2

Governing with a divided Congress generally means that legislation moves more slowly, as a highly polarized legislature must reach agreement over issues that deeply divide the nation before President Joe Biden can sign anything into law. While the current Congress is likely to pass funding the government by its December 16 deadline, things might be much more difficult next October when the time comes to find the government again. In addition, newly elected representatives and senators must work together to raise the debt ceiling or the United States will no longer be allowed to legally borrow money to fund federal programs.3

The two parties are starting to lay out their priorities for the new 118th Congress. Some House Republicans are hoping to investigate the president and his son, Hunter Biden, believing Hunter’s business dealings have compromised the White House.4 Senate Democrats will continue to prioritize filling vacancies in the judiciary by confirming judges nominated by President Biden.5

Beyond the congressional races that took place nationwide, 36 states and three territories held gubernatorial elections on November 8.6 In four races, the party holding the governorship flipped, with Democrats gaining control in three states and Republicans gaining control in one. New milestones were marked, as the largest number of women governors will take office next year, two of whom are serving with lieutenant governors who are also women—the first time women hold both of those positions at the same time.7

Ballots in 37 states included a total of 132 measures for voters to consider.8 A diverse set of initiatives affected elections and voter identification, and most states rejected measures to enhance ID requirements or reduce early voting. Recreational cannabis use was legalized in Maryland and Missouri but rejected in North Dakota, South Dakota, and Arkansas.9 In the five states where abortion access was on the ballot, voters added protections for abortion or rejected additional restrictions.10

Many political pundits and journalists have expressed surprise regarding the midterm outcomes. Weeks before the election, these commentators told Americans to get ready for a “red wave” of Republican victories.11 There were reasons for this argument—inflation is high, the party in power usually loses seats, President Biden is unpopular, and past polls have overrepresented Democratic support. However, it turns out high-quality polls (conducted by professional polling companies that are unaffiliated with a political party) were quite accurate this year, with the only significant miss in Florida where Republican support was underestimated.12

Party officials are still examining what succeeded and what failed in their campaign strategies, but some trends have emerged. Abortion access was important to many voters this year.13 Candidates who campaigned on overturning the 2020 election results and those who placed doubt in election security tended to lose or do more poorly than expected.14 In some key states with close races, “split-ticket” voters were willing to vote for Republicans in some races and Democrats in others. For example, voters in both New Hampshire and Nevada elected a Republican governor and a Democratic senator.15

National and state elected officials are just getting ready to start their terms next year, but attention is already starting to aim toward 2024. The Senate map currently looks more challenging for Democrats, Donald Trump has announced he is running for president again, and Republican leadership is already assessing the best campaign strategies to use in two years.16 In the meantime, those in power face governing a public divided over issues such as climate, the economy, and individual rights.