On December 21st, President Trump signed the FIRST STEP Act of 2018 into law. In addition to being a notable act of bipartisanship, the act will have far reaching implications for the nation’s criminal justice system and will have meaningful impacts on the lives of incarcerated people.

The bill, whose title is an acronym for Formerly Incarcerated Reenter Society Transformed Safely Transitioning Every Person, is intended to somewhat reduce prison sentences for non-violent offenders, and to promote programs aimed at reducing recidivism rates. (Recidivism is the tendency to again commit the same or related crimes after being released from prison.)

For a brief history of the Act and of related efforts, see this article in The New Yorker: The Improbable Success of a Criminal-Justice-Reform Bill Under Trump

Summary of the Act:

Since the passage of the bill, most public opinion has been positive. Much media coverage focused on the process and the fact that something passed with bipartisan support. It has been taken as evidence that there is still the possibility of compromise and cooperation between Republicans and Democrats. Less attention has been paid, at least so far, to the effects of the bill and to the question of whether or not this was a good bill. Some questions to discuss with your students include:

Some resources to help students and teachers discuss these and other pressing questions include:

Congress is adjourning for the holiday break and when it comes back in January, the new congressional class will be the most diverse in history. The November elections saw historic wins for women and minority groups that have lacked representatives of their demographics.

The 116th Congress will include several notable members:

A great infographic can be found here.

Although some new members of Congress have garnered quite a bit of news coverage (namely Ocasio-Cortez and her Twitter exchanges), the overall story of a more diverse Congress is yet to be written. The gains by Democrats in the House of Representatives, along with the increase in women and minorities, is already being dissected in terms of the next presidential election. Is the increase of women’s engagement in politics a response to Hillary Clinton’s loss in 2016? Will Democrats reconsider the mostly white, male candidates that are moving into the forefront for 2020? How will Republicans respond in terms of their engagement of women in their party? 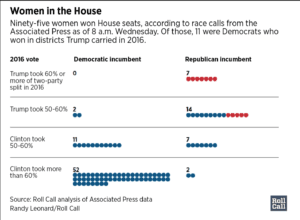 Political pundits have been continuously discussing “identity politics” since the last presidential election, but one new member of Congress has commented on the issue very succinctly. As reported in the Washington Post, Kendra Horn of Oklahoma stated, “I’m very excited to be part of this new class that looks a lot more like our communities.”²

Is this then the essence of identity politics? For a representative body to “look” like the citizens they are representing? Or does this simply reduce politicians to their demographic data? Most of the newly elected members of Congress campaigned on identity issues and embrace their diversity. During the next congressional session, we will see how this translates to the world of policymaking.

Historically, the results of elections have always been honored, even when the fairness of a given contest is debatable. In recent history, for example, some people questioned to what extent the elections of John F. Kennedy1, Richard Nixon2, Ronald Reagan3, George W. Bush4, and Donald Trump5 were influenced by domestic and/or foreign interference. Nevertheless, these men were sworn in as president with the full rights and privileges afforded to that office.

However, in the 2018 midterms, some have begun to question whether the line that protects the results of elections has been crossed.

On November 6, 2018, Wisconsin voters chose to replace incumbent Governor Scott Walker, a Republican, with Superintendent of Public Instruction Tony Evers, a Democrat. The same night, Wisconsinites elected a new attorney general, Democrat Josh Kaul. Despite Democrats’ electoral victories, Republicans retained control of both chambers of the Wisconsin State Legislature. And this week, in the lame-duck session, the Legislature passed several bills that would limit the powers of the governor and the attorney general. These bills will go into effect in the new legislative session, unless outgoing Governor Walker vetoes them (which is unlikely).

In the wake of these actions, some observers have strongly criticized Wisconsin Republicans. Governor-elect Evers will still be inaugurated in January, but some critics suggest that with the changes being pursued by the Legislature, he is essentially assuming a different office, one with fewer powers than the office he ran for. These critics argue that the Republican-controlled Legislature has figured out a way to legally change the results of the election: don’t replace the candidate, just replace the job.6

Republicans tell a different story. They argue that what they are doing is perfectly legal. The only thing that prevents lawmakers from making changes like this in a lame-duck session is timing and tradition. As long as they can organize themselves before the end of the session, they are perfectly within their constitutional authority to pass any and all legislation. Republicans also argue that these three limits are fairly small in scale when compared to the powers the new governor will retain. They aren’t voting to do away with the governor’s veto, for example; they are imposing limits that they deem necessary as a check against executive power.

Finally, Republicans insist that these limits reflect what the Wisconsin electorate really wants. Despite Democrats’ victories in the races for governor and attorney general, the Wisconsin State Legislature will remain under Republican control for the 2019-2021 term. Clearly, Republicans argue, the people of Wisconsin prefer a more conservative state government; these changes help protect the interests of Wisconsinites. (Although it is worth noting that a majority of Wisconsin voters preferred the Democratic candidates for governor and attorney general.)

Congress is back in session after Thanksgiving break, but the newly elected senators and representatives have not yet taken their seats. For the next month and a half, the outgoing Republican majority will continue to call the shots in the House of Representatives, meaning that these are the last few weeks of single-party control of Congress.

Lame duck congressional sessions often hold the possibility of cooperation between the parties, because the recent elections are over and the next elections are a long way off. But at the same time, when a party loses control of Congress, that party often has a desire to accomplish unfinished business. In this post, we will take a look at one of the issues likely to be addressed before the new Congress is inaugurated: whether or not Congress should act to protect special counsel Robert Mueller’s probe.

This short video from PBS Newshour can provide a roundup of expectations—including other issues Congress may address—during the lame duck session ahead.

One of the most pressing issues during the lame duck session will be whether or not Congress should act to protect the special counsel’s investigation into President Donald Trump’s connections to Russia and into any efforts made to obstruct justice or mislead federal investigators.

In the aftermath of Republicans’ losses in the midterm elections, President Trump fired Attorney General Jeff Sessions, who he had long criticized for recusing himself from the Russia investigation and allowing for the appointment of Mueller as special counsel. President Trump’s pick to be the new acting attorney general, Matt Whitaker, is seen by some as a threat to the independence of the Mueller investigation because he has been critical of the probe in the past. This MSNBC article details the concerns that some people—especially Democrats—have about Whitaker.

At the end of November, most Senate Republicans decided not to join Senator Jeff Flake, R-Ariz., in working with Democrats to protect the probe. Senator Mike Lee, R-Utah, argued that a special counsel should not be made an unaccountable “fourth branch of government,” effectively blocking the legislation from moving forward. (See this Salt Lake Tribune article for more detail.)

However, it is still possible for the Senate to act. This editorial in the Denver Post makes the case to Colorado readers that Senator Cory Gardner, R-Colo., should join Senator Flake and Democrats in protecting the probe.

After sharing these resources with your students, ask them to consider the arguments made by those who support and those who oppose congressional action. Writing in National Review, Jonathan Tobin makes the case against Senate action and urges legislators to be cautious about setting precedent. In the Washington Post, University of Texas law professor Steve Vladeck makes the case for legislation to protect the investigation, arguing that the president cannot be trusted to allow the probe to continue.