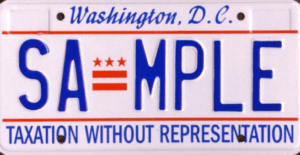 If you visit Washington, DC, one of the things you may notice is the license plates on local vehicles.

While the inhabitants of the District of Columbia pay federal taxes, they do not have voting representation in Congress – just one delegate whose votes do not count. So since 2000, after approval by the Mayor and City Council, DC residents have had a choice to use their license plates as a form of protest. “Taxation Without Representation” harkens back to the causes of the Revolutionary War and the principles under which it was fought.

The creation of a federal district was outlined in the Constitution, Article I, Clause 17 which allows Congress “To exercise exclusive Legislation in all Cases whatsoever, over such District (not exceeding ten Miles square) as may, by Cession of particular States, and the Acceptance of Congress, become the Seat of the Government of the United States, and to exercise like Authority over all Places purchased by the Consent of the Legislature of the State in which the Same shall be…” This allowed Congress to create a federal district over which they had power as it would not be part of a state.

As Washington, DC has grown, so has the frustration of its population. Its citizens were not allowed the right to vote in the Presidential election until the passage of the 23rdAmendment in 1961 which gave the District three Electoral Votes for President. But still, they have no voting representation in Congress.

Activists in Washington, DC are now trying to get the city approved as the 51st state. With a population (estimated at 693,000 in 2017) greater than Vermont or Wyoming, its residents argue that they deserve two Senators and a Representative as much as any states are entitled to them. They argue that the residents pay taxes, serve in the military and contribute to the welfare of the nation as a whole, so they should be entitled to the same rights.

Those who oppose Washington, DC becoming a state explain that there was a reason that the framers of the Constitution did not want the federal district to gain too much power. In Federalist #431, one of the authors of the Constitution and future President James Madison, explained that if the capital were in a state, that state would have too much power as members of Congress would be beholden to it as part-time residents.  However, Madison also writes that while not part of a state, the federal district’s citizens “will have had their voice in the election of the government which is to exercise authority over them.” This part of Federalist #43 is used by supporters of DC having representation in Congress to show that it wasn’t the intent for them to be disenfranchised.

In the election of November, 2016, DC voters overwhelmingly approved a referendum to make Washington the nation’s 51st state.2 To get around the Constitutional requirement that the federal district be under the control of Congress, the referendum carved out the area of the city with the White House, Congress and many of the federal departments as “federal district.” But the rest of the city would become the state of “New Columbia” with two Senators and a Representative. The referendum passed with over 78% of the vote.3

While she can’t vote on legislation, Eleanor Holmes Norton, DC’s delegate to the House of Representatives, did introduce a bill, H.R.51, the “Washington D.C. Admission Act” which would admit Washington, minus the federal properties, into the Union as the 51st state. While it is very unlikely it will pass through Congress right now, the groundwork is being laid for the possibility that the State of New Columbia will add its star to the American flag sometime in the future.

This past Friday, President Trump announced a new round of tariffs on $200 billion dollars’ worth of goods from China, increasing the rate from 10% to 25%. On Sunday, China announced retaliatory tariffs on $60 billion dollars’ worth of US goods increasing to a rate of 20-25%.1 The so-called ‘trade war’ between the US and China has been ongoing since the summer of 2018 and there is no clear end in sight. So, what does all of this mean?

What is a trade war?

A trade war usually centers on two nations with a trade imbalance. A trade imbalance occurs when Nation A imports more from Nation B than Nation B imports from Nation A.  Such imbalances are normal since it’s impossible for any trade relationship to ever be 100% balanced. However, when the imbalance gets too extreme it can start having a negative effect on the economy of whichever country is importing more goods. Generally speaking it essentially means that one country is getting more benefit out of the trade relationship than the other.

A trade war occurs when rather than yield to the pressure of tariffs, a country imposes its own tariffs instead. In our example, after Nation A imposes the tariff on Nation B’s apples, Nation B responds by placing a similar tariff on Nation A’s oranges. Both countries try to get the other to back off from tariffs by making it too costly to continue.

With the US and China now embroiled in a trade war the question becomes: ‘Why?’ The Trump Administration has argued that tariffs on Chinese goods are necessary to decrease the trade imbalance between the US and China and will have the effect of growing the US agricultural industry and creating job opportunities in the US.2

However, many experts are skeptical of this plan. The President’s own economic advisor, Larry Kudlow, has stated that while the tariffs will ultimately do more damage to China’s overall economy, the US agricultural industry has been and will continue to be directly damaged as farmers are no longer able to sell soy beans, corn, and pork to Chinese markets.3 Many economists also point to the fact that whatever the goals of a trade war, the immediate result is that prices for consumers rise in both countries, meaning for most Americans the only observable effect of the tariffs will be that their grocery bills cost more.4

The trade war has also produced a precipitous effect on the stock market which opened at a two-month low on Monday as a result of China’s retaliatory tariff announcement. However, many economists argue that these dips in the stock market are usually only short-term.5

Ultimately though, the President’s trade war may be poorly timed if the goal is to restore balance in the US-China trade relationship. While China continues to depend on foreign exports for things like steel, oil, and heavy industrial goods (airplanes, cars, etc.) the Chinese government has also been laying the groundwork for a massive shift away from an export-driven economy to a domestic-focused economy as Chinese consumers gain more wealth and ability to purchase goods.6 While the trade war may be accelerating their timeline and making the transition more risky, the decline in access to foreign goods may wind up boosting Chinese domestic industries as the Chinese government had planned.

[3] Newburger, Emma. (2019, May 12). Kudlow acknowledges US will pay for China tariffs, contradicting Trump. Retrieved from https://www.cnbc.com/2019/05/12/kudlow-says-us-will-pay-for-china-tariffs-contradicting-trump.html

[5] Wearden, G. (2019, May 13). Trade war: China hits back with new tariffs on US goods – business live. Retrieved from https://www.theguardian.com/business/live/2019/may/13/trade-war-investors-china-retaliation-us-tariffs-growth-stock-markets-business-live