The United States is one of a few nations in the world to have no official language designated. While the Constitution gives no reasoning for this, many reasons have been suggested by experts. Several bills have been introduced in Congress to designate English as the national language, but none have ever been successfully passed into law. This debate is open again because a new bill has been introduced in Congress. On February 6, 2019, Rep. Steve King (R-IA), who was stripped of his committee assignments after making comments supporting white supremacy and white nationalism1, introduced HR997 English Language Unity Act of 2019. If enacted, this bill would designate English as the official language of the United States of America. As of this writing, the number of co-sponsors is at 11 and all are from the Republican party.2 The bill was referred to the Committee on Education and Labor and the Committee on the Judiciary.

A Brief Overview of Language in the United States

According to the U.S. Census Bureau, while the most widely spoken language in the United States is English (and that is the language used for most governmental functions), over 350 different languages are spoken in homes across the nation.3 This number has not changed significantly since the founding of the country, when almost 300 indigenous languages were spoken in North America4, but the composition of the languages has changed. Data from the American Community Survey shows that the types of languages spoken by residents vary by region and that there is the most diversity in metropolitan cities. In fact, over 91% of the population of non-metropolitan areas in the U.S. speaks English only.5For example, in the Washington DC metro area there are at least 168 spoken languages and 26% of the metro area population speaks a language other than English at home.2One of the smaller language groups found there is the collection of Amharic language speakers (the estimate is 43,125 residents).

A Brief Background of Related Legislation

The United States has never been a one language nation, but a debate has existed since our founding about whether we should be. For example, in 1755 (prior to the American Revolution), Benjamin Franklin wrote about his growing concern that German immigrants to Pennsylvania would eventually dominate the English with their customs and language.6 Later, in 1780, John Adams—who had written extensively on his belief that our new nation needed a common language7 — wrote to Congress to request the creation of “The American Academy, for refining, improving and ascertaining the English Language8.” Throughout the late 19thand 20thcenturies, the federal government operated boarding schools in which American Indian students were punished harshly for speaking or writing in their tribe’s language.9

In 1981, Senator Samuel Hayakawa (R-CA) introduced an amendment to the constitution entitled, the English Language Amendment (ELA). This amendment would have designated English the nation’s official language. Though it did not pass, Senator Hayakawa helped found an organization to keep the movement for English as the nation’s official language alive: US English, INC., which describes itself as “the nation’s oldest and largest non-partisan citizens’ action group dedicated to preserving the unifying role of the English language in the United States.10” Several of bills have been introduced since the ELA. While a few have been able to gain approval in either the House or the Senate, none have ever passed through both chambers of Congress and, as such, have died before passing into law.

Despite the introduction of many bills, Congress has never agreed to designate an official national language, so what is the debate over? What do supporters and opponents of this initiative have to say?

Some arguments made by supporters of designating English as the U.S.’s official language:

Some arguments made by opponents of designating English as the U.S.’s official language: 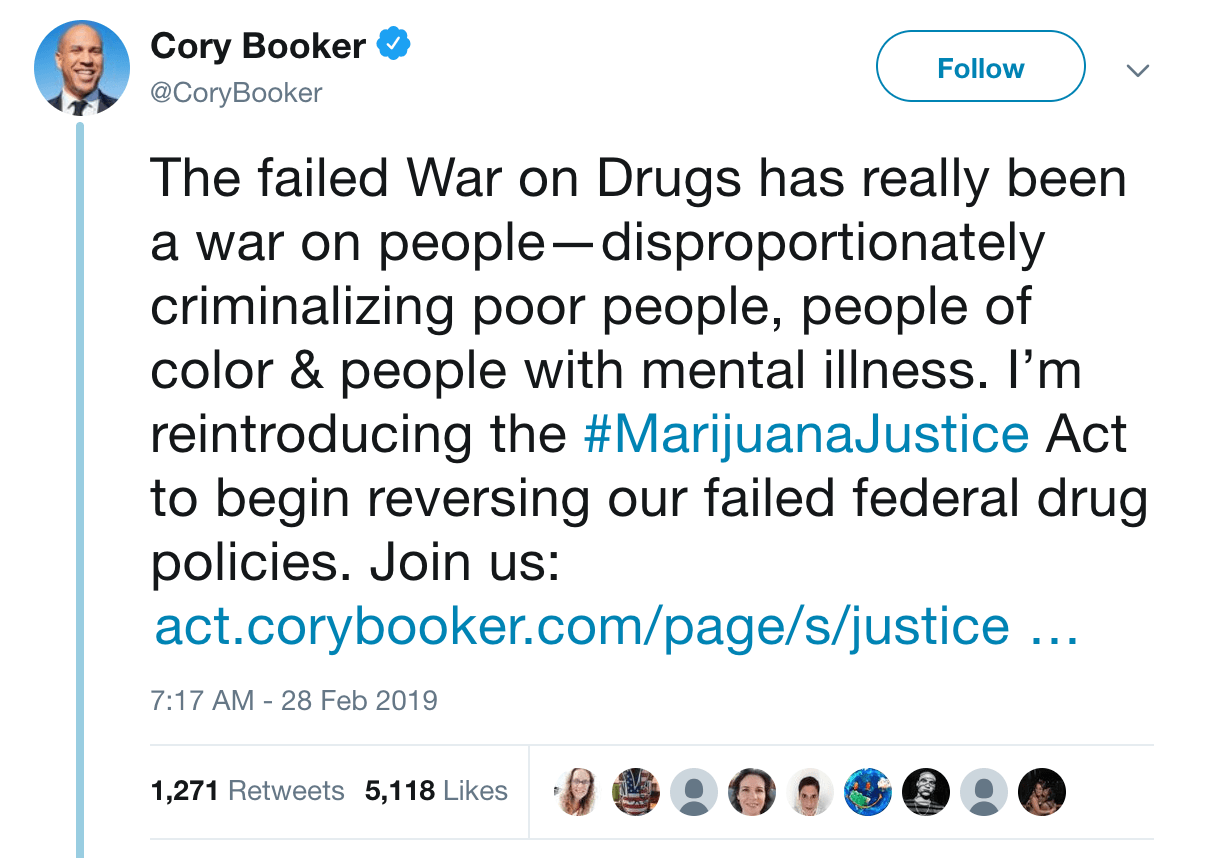 The views expressed by Sen. Booker illustrate a growing movement to take Marijuana off the federal government’s list of dangerous drugs. From being a target during the War on Drugs, to full legalization in several states, policy approaches to marijuana sales, possession and use have changed radically over the past decade. Despite many strong opponents of decriminalizing marijuana in any form, access for medical purposes up to full legalization has been gaining momentum in the states.

Should the Federal Government legalize Marijuana? As of now:

Use this map to learn about marijuana laws in your state

At the federal level there has not been a consistent view of marijuana legalization. Under former U.S. Attorney General Jeff Sessions, the Trump Justice Department took a hardline view of state marijuana laws, rescinding a guidance letter that basically stated that the federal government would not interfere with state marijuana laws. But the new Attorney General, William Barr, stated at his confirmation hearing and after that he would not meddle with states’ marijuana regulations.2 President Trump has indicated he would support legislation that would end the blanket federal ban on marijuana.3

Those opposed to making marijuana legal and more accessible have a number of arguments, but the two main ones are (1) Marijuana use leads to many detrimental health effects,4 and (2) Legal marijuana means the companies who are ready to take advantage of the newly legal product (“Big Marijuana”) will market the product aggressively both to those who already smoke it and those who are susceptible to advertising, leading to much greater use than under current conditions.5

However, Senator Booker and Representative Barbara Lee (D-CA) want to not only decriminalize marijuana at the national level, but to mitigate what they view as the harm caused by the War on Drugs and, specifically, the incarceration of those charged with possession of marijuana. According to NORML, and organization that seeks reform of the laws that regulate marijuana, the bill would:

Last month, a federal judge in Texas ruled that an all-male draft is unconstitutional.1Current laws demand that all males must register for Selective Service within 30 days of their 18th birthday, or face prosecution, fines and prison time. If an American male over 18 is not registered, he is not eligible for federal student aid, cannot apply for federal jobs and cannot register for federal and state jobs training programs.2

A military draft has been a constant presence in American life throughout the 20th century. During World War I, because of an increased demand for members of the armed forces, Congress passed the Selective Service Act of 1917. The draft was cancelled after Armistice in 1918. In 1940, the first peacetime draft was enacted because of increasing tension in Europe and the threat of another world war. Even after the war was over, the draft remained as the nation stayed in a constant high-alert throughout the Cold War. During the Vietnam War, the draft faced public condemnation and new scrutiny. Draft exemptions favored upper-middle class and wealthy individuals3, and African Americans were drafted at higher rates while holding fewer positions as officers.4 As the military involvement in Southeast Asia wore on, the draft became even less popular.

The draft was suspended in 1973 and the military has been all-volunteer since then. However, in 1980, registration was reinstituted to require that all 18-year-old males register for Selective Service if the federal government decides to reinstate the draft.

Since the 1960’s, the all-male draft has been a point of contention for both feminist and male rights activists. A lot of resistance to gender equality laws, including the Equal Rights Amendment, has been based on an aversion to women’s involvement in the draft. Women’s rights groups opposed the draft on the grounds that the military did not give equal opportunity to women and women were barred from many occupations in the military. Men’s rights groups countered that a federal requirement for only one sex was discriminatory to men and unconstitutional. This past year, the National Coalition for Men brought a lawsuit to the Southern District of Texas and the judge agreed with this assessment.

The federal court judge issued the ruling as a declaration, not an injunction, so the court did not make any demands or give instructions to Congress for changing the Selective Service laws. But, this court case does open up more legal avenues for the draft laws to change.

Many countries have compulsory military service, including Brazil, South Korea and Switzerland. Israel requires all citizens, male and female to service in the armed forces. Other nations have expanded their idea of service; France is considering three-month required service for 16-year-olds that could include postings in many areas of civic and governmental duty. Even South Korea, in a constant state of military readiness because of their decades long tension with North Korea, allows athletes and Olympians to be exempt from their military draft. There are federal service possibilities within the United States that already exist that could substitute for a military draft.

Interested in extending the discussion? Our CivX Now coalition partners at the National Constitution Center created this resource to help students deliberate about the idea of mandatory national service.

Every ten years, the federal government conducts a census to count people residing in the United States. The information gathered helps the federal, state, and local governments plan and create public policy, identifies regional and national trends, and, most importantly, is used in apportioning seats in the U.S. House of Representatives. As the U.S. population grows, some states grow more rapidly than others, and those states may gain representation in Congress.

The census provides a useful way for teachers to engage students in conversations about the purposes of government, and about questions in U.S. democracy.

In this post, we will offer some resources and questions for teachers to help students understand discussions around the census.

Topic: The Census and Race

The census does more than counts who lives in the United States, it also sorts people into categories. These categories have shifted over time. Use this article from Vox.com to help students explore the ways in which the census has addressed race over time: 220 years of census data proves race is a social construct

The census has never counted LGBTQ individuals, meaning that there is little reliable data on the size of this population in the U.S. LGBTQ rights advocates have long sought representation through the Census, and an early draft of the 2020 Census included a question about sexual orientation. However, it was removed with little explanation in March of 2017. Here is an NBC News article about the issue.F

Topic: The Census and Citizenship

A key debate about the 2020 census is whether to include a question about citizenship status. Right now, the question is being challenged in court, and the Supreme Court will hear arguments about it soon. Here is an NPR.org article about the Supreme Court case. Also, here is one set of arguments against including the citizenship question developed by Asian Americans Advancing Justice. And, here is a set of arguments in support of including the citizenship question in an editorial from Investors Business Daily.

Topic: The Census and Representation

A key role for the Census is determining the distribution of seats in the U.S. House of Representatives. To better understand why this matters, students can review this New York Times article from April 2, 1861, to see how the census of 1860 impacted the debate over slavery. Additionally, students can read this Rio Grand Guardian article about Texas’s worry about being undercounted.