Why declare an emergency?

On February 15th, 2019 President Trump declared a state of emergency at the US-Mexico border in an effort to secure funding for his long-promised border wall. The move had been predicted for months as a way to avoid a government shutdown if Congress refused to allocate the funding in the annual budget.

Faced with the prospect of another shutdown only weeks after triggering the longest in history, the Trump administration again floated the emergency declaration as a solution.1Politically, it would be difficult for the President to weather another shutdown. Polls showed the majority of the American public blamed the Republican Party and specifically President Trump for the first shutdown.2 Risking another would be dangerous for the administration, particularly with more and more Democrats announcing their presidential campaigns each week.

The state of emergency provides a number of potential benefits for the Trump administration. For one, it means that the President doesn’t have to concede defeat on his campaign promise to build the wall. Additionally, it could help Trump solidify the ‘sticks-to-his-guns’ image that much of his base voters value. And ultimately, if his moves actually led to construction on the wall it would be a profound political victory in the lead up to his 2020 re-election campaign.3

What’s in a Name?

So, a state of emergency. It certainly sounds dramatic. It seems bold if you support the President’s plans and ominous if you oppose them. But, what isit really?

First off, a President declaring a state of emergency is anything but rare. Famously, George W. Bush declared a state of emergency following the 9/11 attacks and then 11 more throughout his term. Bill Clinton declared 17 in eight years and Barack Obama declared 13.4 In fact the United States has continuously been in some form of an emergency state for over 40 years.5

States of emergency give Presidents special powers to act to resolve the crisis. The general idea is that a President can declare a state of emergency in response to some extraordinary problem be it a natural disaster, a terrorist threat, or even a labor dispute. The declaration allows the President to side-step the slow process of legislation in order to affect a solution to a problem as quickly as possible.

The tricky thing about states of emergency is that no one really knows what counts as an emergency and there’s no clear answer on what a President can or cannot do once a state of emergency exists. The determination of whether or not a President can take a certain action is left to the courts. The problem is that that usually means if a Presidential act is judged to be an overreach, the President has already done it.6 Additionally, the Supreme Court has only outright blocked two emergency declarations in history.7

While the actions taken by Presidents during states of emergency usually concern using the military to bolster relief efforts or reallocating emergency funds to help rebuild infrastructure, there are times when presidential actions have genuinely trodden on otherwise sacred rights and liberties.

Perhaps the most infamous example would be Franklin D. Roosevelt’s Executive Order 9066, made under the state of emergency declared following the attacks on Pearl Harbor. E.O. 9066 resulted in the forcible internment of thousands of American citizens who simply happened to be of Japanese descent. That power was later challenged in the Supreme Court, which originally ruled in favor of the President, and was only officially overturned last June, 67 years later.8 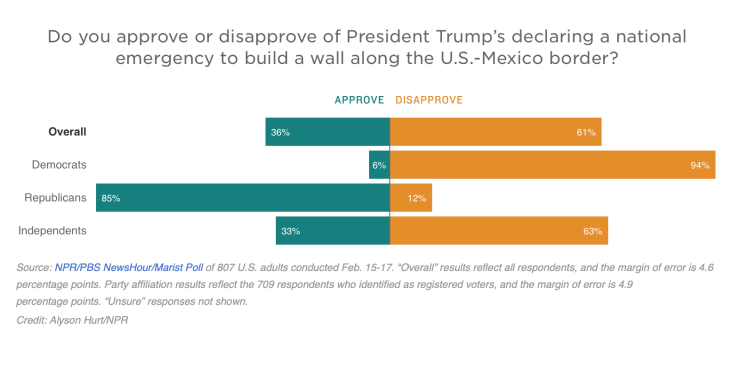 There are a number of perspectives on President’s Trump’s emergency declaration. Overall, the emergency declaration is unpopular, with 41% supporting it and 51% opposing.9 However, it is worth nothing those numbers roughly match Trump’s current approval and disapproval rating, respectively.10

Besides general support for the President, those who favor the decision believe the need for a border wall and the state of immigration genuinely constitute an emergency and dismiss the argument that the wall will be ineffectual or that the emergency declaration is an overreach.11

Those who oppose the declaration tend to oppose the President more broadly and the border wall specifically as a waste of money, an outdated tactic, and a remedy to a problem which has been on the decline for decades.12 However, many also argue that the use of an executive order violates Constitutional separation of powers.

In all the argument and debate there remains one undisputable fact: like it or loathe it, President Trump invoking a national emergency is nothing new and has been a go-to tool for Presidents for the better part of a century. But perhaps that’ the real issue here.

[3] Stewart, E. (2019, February 15). Why Trump thinks a national emergency will get him his border wall. Retrieved from https://www.vox.com/policy-and-politics/2019/1/8/18172749/trump-national-emergency-government-shutdown-wall

[4] Paul, D. (2019, January 12). Trump may declare a national emergency in the border wall battle. Here’s what that means. Retrieved from https://www.washingtonpost.com/politics/2019/01/12/trump-may-declare-national-emergency-border-wall-battle-heres-what-that-means/?utm_term=.2e7b748c7a34

[5] Emergencies Without End: A Primer on Federal States of Emergency. (2017, December 12). Retrieved from https://www.lawfareblog.com/emergencies-without-end-primer-federal-states-emergency

[10] NateSilver538. (2019, February 23). How Popular Is Donald Trump? Retrieved from https://projects.fivethirtyeight.com/trump-approval-ratings/

In the weeks since Democrats took over the House of Representatives, an idea has been gaining some momentum and media attention: A Green New Deal. According to CNN’s Zachary Wolf, the proposal will likely become a litmus test on the road to the Democratic presidential nomination.1 In this post, we’ll take a look at what is in the Green New Deal and the debates surrounding some of the proposals.

Newly elected Representative Alexandria Ocasio-Cortez, D-N.Y., is the leading proponent of the Green New Deal and has cosponsored a resolution, along with Senator Ed Markey, D-Mass., to support the idea. The resolution, which is non-binding, would only express the commitment of Congress to work on the creation of Green New Deal laws and programs.2 Representative Ocasio-Cortez told NPR, “Even the solutions that we have considered big and bold are nowhere near the scale of the actual problem that climate change presents to us. … It could be part of a larger solution, but no one has actually scoped out what that larger solution would entail. And so that’s really what we’re trying to accomplish with the Green New Deal.”3

So, Just What Is in the Green New Deal?

The Green New Deal is intended to address concerns about future economic growth, climate change, and income inequality. Major elements of the plan, as described in the non-binding resolution being considered by Congress, include:4

As these excerpts illustrate, the scope of the Green New Deal is sweeping and ambitious. It would impact major sectors of the economy, labor laws, trade policy, the social safety net, access to education, transportation, and the manufacturing, energy, and agriculture industries. Needless to say, there is widespread discussion and debate about the Green New Deal, and we will revisit the political aspects of the debate in a future post.

“Yes Virginia, there is an ERA”

These slogans adorned the banners and signs that ERA supporters brought to the Virginia State Capitol at the beginning of the General Assembly’s legislative session this January. ¹ ERA activists are hoping that this year’s session would include a floor vote on ratification of the Equal Rights Amendment, born in 1923, passed by Congress in 1972, but has lingered in ratification limbo ever since.

The history of the ERA is long and winding. After the 19thAmendment guaranteed women’s right to vote, suffrage leaders determined that the next step was full legal and political equality.  Suffrage leader Alice Paul drafted the ERA in 1921 and it was introduced to Congress in December of 1923. Almost 50 years later, in 1972, the amendment was approved by Congress and moved into the ratification phase.  At this point, the process became more complex.  The Amendment was initially given a passage deadline of seven years.  If 38 states did not ratify by 1979, the amendment would die.  In 1978, the amendment was three states short of ratification and supporters pointed out that the deadline was written into the preambleof the amendment, not the amendment itself. This loophole allowed for an additional three years for ratification.  By this point, there was a large political backlash against the women’s rights movement and the three states never materialized. ²

What is the Equal Rights Amendment?: This overview from Washington, DC’s ABC News affiliate helps answer the question.

The ERA seemed lost to time until 1992, when a 203 year old bill outlining restrictions on Congressional pay was passed as the Twenty-Seventh Amendment. Supporters of the ERA started to build political support for the “Three-State Strategy”, claiming that if three additional states ratify the Amendment, Congress can retroactively remove the deadline on the amendment. In essence, the Twenty-Seventh Amendment gave a precedent for Congress to change or eliminate deadlines to ratification and new hope to ERA supporters. In 2017, Illinois ratified the ERA followed by Nevada in 2018.  The next state to ratify could secure the 38 states needed and bring the question of deadlines right to the feet of Congress.

Back in Virginia, the state Senate approved a floor vote on ratification but the vote was then denied by the House of Delegates Committee on Privileges and Elections.  With this denial, the Virginia General Assembly does not have a way forward to vote on the issue of ratification, and the Amendment is still one state short of passing.³

The debate over the Equal Rights Amendment has brought up a host of complicated questions that both supporters and opponents have trouble grappling with.  Among these questions: Should women be included in Selective Service? What is the court’s role in determining the presence of gender discrimination? How will this affect sex-based labor protections such as protections for pregnant workers?  Among all of these, the questions of the proper process to approve Constitutional Amendments looms the largest. The amendment seems to die, only to be resurrected by new precedents extending the procedural timeline.  Although it has been almost a century since its introduction to Congress, ERA simply won’t go away.