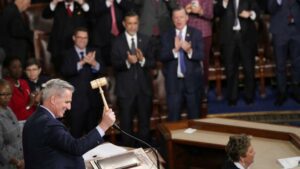 An under-the-radar rule change proposed by Democrats in the House of Representatives in the waning days of 117th Congress could potentially increase members’ yearly compensation. The provision, approved by the House Administration Committee, would allow reimbursement for a number of living expenses, including lodging, food, and travel in Washington, D.C.

How Much Do Members of Congress Get Paid? How Is this Salary Determined?

Since 2009, the annual salary of a member of Congress is $174,000. Due to the additional responsibilities tied to their jobs, members in congressional leadership positions receive a higher salary. The speaker of the House receives $223,500 annually, and the Senate president pro tempore (the second-highest-ranking official in the Senate) receives $193,400.1 These salaries are determined by provisions in laws, most recently the Ethics Reform Act of 1989. The Bureau of Labor Statistics determines year-to-year salary increases. However, Congress has consistently voted down these specific increases, staving off potential political backlash from taxpayers for over a decade.

What Does This Compensation Change Mean? How Was the Decision Made?

Last week, members and staffers were notified via email of the change first proposed by the bipartisan House Select Committee on the Modernization of Congress. The rule was passed unanimously by the committee in December 2022. However, this type of action is not subject to debate on the House floor and was only included in a narrowly publicized final report. According to the New York Times, individual members could be reimbursed up to about $34,000 this year. If each of the 440 current members and delegates requested the maximum amount allowed by the rule change, the costs would total about $15.1 million.2

Why Was This Decision Made? What Is the Potential Impact?

The report justified the compensation change, stating: “Unlike their counterparts in the executive branch and private sector, members do not receive a per diem or reimbursement for their out-of-pocket living expenses when they are at work in Washington.”3 The report conceded that $174,000 is far beyond the average American income, but it included the defense that members must maintain homes in Washington, D.C., as well as in their local districts.

During a 2022 committee hearing, former Representative Gregg Harper, R-Miss., testified that he had to end his congressional service because he could not afford to serve and provide care for his son, who had a rare medical condition.4 Although this is a single experience, it does echo a growing salary issue for rank-and-file members of Congress. Washington, D.C., boasts some of the highest cost of living in the nation. As of January 2023, the average cost of rent for a studio apartment is upwards of $2,300.5

Supporters of the plan argue that it would broaden who could afford to serve in an elected position in Congress. In an effort to address growing costs and provide a living wage to Capitol Hill staffers, $35 million was added to each member’s annual budget. However, any costs that members incur under this new rule would be taken from those budgets and, possibly, the pockets of congressional staff.

In an interview with the Washington Examiner, former Representative Mo Brooks, R-Ala., was critical of the decision. ”You can have a reasonable public policy debate on whether congressmen should be paid more or less. … It’s the people’s money. It’s the people’s business,” he said. “Any pay raise or improvement and compensation package ought to be done in the public arena. And this one was not.”6