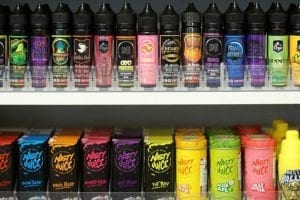 On September 11, 2019, President Donald Trump told reporters that his administration was considering a ban on flavored vaping products.1 This announcement came after a sometimes-fatal, vaping-related illness began appearing across the United States. On November 18, the Trump administration seemed to reverse course under pressure from constituents2 and corporate donors,3 announcing that no new regulations would be put in place at this time.

Vaping is the use of electronic cigarettes (often stylized as e-cigarettes). E-cigarettes are battery-operated devices that heat a liquid into a vapor that is inhaled.4 E-cigarettes can contain an assortment of substances, including nicotine and THC (tetrahydrocannabinol, the active compound in marijuana). E-cigarettes can also come in various flavors that mimic candies, soft drinks, or fruits. The flavoring of e-cigarettes has sparked nationwide discourse about the free market and consumer safety principles.

Opponents of flavored e-cigarettes claim that such products add to the influx of adolescents becoming addicted to nicotine. Prior to the rise of e-cigarettes, the Centers for Disease Control and Prevention reported downward trends in tobacco consumption. However, “since 2014, e-cigarettes have been the most commonly used tobacco product among U.S. middle and high school students. Between 2017 and 2018 alone, the number of youth who used e-cigarettes went up by 1.5 million. In fact, the U.S. Surgeon General has called e-cigarette use by youth an ‘epidemic,’ and warned that it threatens decades of progress toward making sure fewer young people use tobacco.”5

Supporters, on the other hand, view e-cigarettes as a safer alternative to cigarettes—one that has helped many people break their addiction to smoked tobacco products. Proponents of flavored e-cigarettes believe that banning flavors would not discourage people from the risks of vaping; rather, it would make them turn to the black market, where they could come into contact with unregulated, potentially dangerous products.6 Advocates of flavored e-cigarettes also argue that over-regulation of flavored tobacco products would hurt small businesses. Americans for Tax Reform (ATR), a conservative advocacy group, noted, “Eliminating all but one or two of these options [of e-cigarette flavors] for adults would destroy thousands of small businesses, force many adult vapers to return to smoking, and force some to seek out products on the black market.”7

However, as a result of the vaping-related hospitalizations and deaths, state governments and some private businesses have begun implementing new restrictions. Juul Labs Inc., one of the largest e-cigarette providers in the United States, announced on October 17, that it would suspend sales of all non-tobacco- and non-menthol-based flavors of its e-cigarette products.8 As of October 28, the state governments of Michigan, New York, Rhode Island, and Washington have issued temporary bans on flavored vaping products, and other states are considering implementing bans. Massachusetts has instituted the most restrictive ban—a four-month ban on the sale of all vaping products, regardless of whether or not products are flavored.9

As the conversation about flavored e-cigarettes continues, individuals on both sides of the debate are taking a closer look at this social phenomenon and its impact on American society.

For further reading on e-cigarette bans, please see Close Up in Class’ Controversial Issue in the News on the subject.