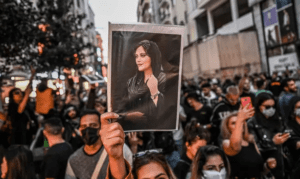 In recent days, Iran has been gripped by a series of mass protests that have gained international attention. The protests, largely led by women, are somewhat unprecedented. While both protest and women’s participation in protest in Iran are not new, the protests of the past two weeks are remarkable as the first of such scale specifically directed by Iranian women and centered on women’s civil rights in the country.1

The protests began in response to revelations that an Iranian woman, Mahsa Amini, had died in custody of the nation’s “morality police,” an arm of the Iranian government that is responsible for enforcing religious law in the country. Amini had been arrested for refusing to wear a hijab, a head covering worn by Muslim women to conceal their hair. The precise circumstances of Amini’s death are unclear. The Iranian government maintains that she died of a heart attack while in coma at a hospital in the capital city of Tehran, but protesters and critics argue that she was in a coma as a result of beatings and torture endured while in police custody.2

In 1979, Iran experienced a revolution which installed Islamic religious leaders as the head of its government supported by opposition to Western interference in the country. The Iranian theocracy (a religious government) is an authoritarian regime led by a council of religious elders headed by the supreme leader. The supreme leader has ultimate authority over the military of Iran as well as the civilian government. Under Iran’s constitution, there is a legislature, a court system, and a president, but the supreme leader overrides all of those government bodies and is responsible for appointing most of the country’s leadership. The supreme leader holds office for life, with the current one, Ali Khamenei, having been in power since 1989.3

Iran has a culture that dates back to ancient Persia and to this day is among the most powerful nations in the Middle East. Unlike many of its neighbors where the majority religion is Sunni Islam, Iran’s dominant religion is Shia Islam, a distinct sect. Despite the theocratic government enforcing religious laws on Iranian society, Iran is actually among the most developed and cosmopolitan nations in the region and its people maintain a complex relationship with Western culture and influences. Throughout the regime’s history, the clash of theocratic rule with secular (non-religious) interests and a desire for reform in the country has led to unrest and political turmoil. Nevertheless, the theocratic government has managed to maintain its control.4

The U.S. Response to the Iranian Protests

Protests have been spreading and growing in size across Iran, a common sight being that of women burning their hijabs, dancing in the streets, and calling for freedom and the death of the supreme leader. The government has responded severely. Journalists reporting on the hijab protests have been jailed, hundreds of Iranian women have been beaten in the streets and arrested, and at least 40 people have been killed5.

The last major period of unrest in Iran occurred in 2009. At the time, President Barack Obama’s administration (in which now-President Joe Biden served as vice president) was hesitant to publicly support the protests. However, the current Biden administration has made its support clear following a speech given by President Biden to the United Nations. The United States has since imposed sanctions on members of Iran’s morality police and is making efforts to provide satellite and internet services to Iranian citizens following a government shutdown of the country’s telecommunications.6

« The Water Crisis in Jackson, Mississippi
Back to all Posts
The Voting Rights Act Goes to Court, Again »