The Water Crisis in Jackson, Mississippi 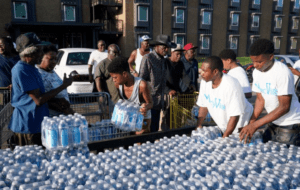 On August 29, 2022, Mississippi Governor Tate Reeves declared a state of emergency for Jackson, the state capital, which was in the midst of an ongoing water crisis.1 Heavy rainfall caused the Pearl River and Ross Barnett Reservoir to flood, which in turn overwhelmed two water treatment plants that were already strained.2 Low water pressure and contamination left the city of 150,000 people—the largest in the state—without safe, reliable running water.3

The lack of pressure cut off thousands of homes from the city’s water supply.4 No water flowed from faucets, showers, or toilets. Residents of Jackson who did have pressure found their water to be unusable and unsafe. “The water that’s coming out of my kitchen sink smells like fresh sewage,” said Carey Wooten, who lives in Jackson with her two children. “As soon as you turn it on, it hits you right in the face. It’s horrible.”5  The Mississippi State Department of Health issued a boil-water notice, advising residents to not use their tap water. Lines stretched for blocks as residents waited to receive limited supplies of bottled water across the city.6 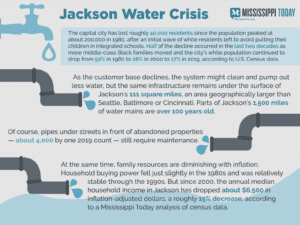 Only a Matter of Time

The August flooding didn’t create the water crisis in Jackson. Instead, it exacerbated systemic problems that residents have been dealing with for years. There have been ongoing boil-water notices issued after storm events, leading to distrust by residents who feel that they are not receiving the proper services that should be guaranteed by the city.7 For years, officials have routinely warned that “pregnant people and children under five” should not drink the tap water due to elevated levels of contaminants like lead.8 Runoff from the recent flooding has only increased the contamination concerns and scope of this problem. “We’ve been going it alone for the better part of two years when it comes to the Jackson water crisis,” said Mayor Chokwe Antar Lumumba. “I have said on multiple occasions that it’s a not a matter of if our system would fail, but a matter of when our system would fail.”9

The Role of Race in the Jackson Water Crisis

Advocates argue that structural racism is at the root of the water crisis, stretching back decades to “white flight” out of the city. “This is a deep seated, decades-long in the making kind of situation,” said Arielle King, a lawyer and environmental justice advocate. “I think the history of racial segregation and redlining in this country have deeply contributed to the environmental injustices we see right now.”10

The population of Jackson has declined more than 20 percent in the last 40 years, a trend which started with an exodus of wealthier white people to the suburbs after the city began integrating its public schools.11 Jackson is now approximately 83 percent Black, and nearly one in four residents live at or below the federal poverty line.12

These demographic shifts have had compounding effects. White flight left Jackson with lower tax revenues, as people of higher socioeconomic status no longer contributed to the city. Less money meant fewer investments in public resources. Even though upgrades to aging, underperforming infrastructure like the city’s water treatment plants were long overdue, nothing was done to improve them.13 A total breakdown of the system was inevitable after decades of deterioration and delay. The flooding in August was the breaking point that took an already vulnerable situation and made it worse.

READ: “‘A Profound Betrayal of Trust’: Why Jackson’s Water System is Broken”

Some argue that structural racism both created this crisis and is responsible for the continued inaction by local and state governments. For example, policy experts at the centrist Brookings Institution wrote, “Jackson is a city with one of the largest shares of Black people in America, in the Blackest state in the union. Ideally, infrastructure serves as a shared foundation for economic, environmental, and public health between different neighborhoods and municipalities; however, infrastructure is often poorly maintained or intentionally overlooked in particular places, leading to a lack of access, affordability, and safety for many communities of color.”14

Officials estimate that it would cost at least $1 billion to fix Jackson’s water infrastructure, with even more money needed to properly maintain it.15 Jackson cannot pay for this on its own, and the state of Mississippi has not allocated money for the repairs. Plus, the wealthy white suburbs that surround Jackson do not share a sense of urgency or obligation to help a community that isn’t theirs.16 Some have questioned if this would even be an issue if Jackson were a predominately white community, wondering just how bad things have to get for something to finally be done.

Partisanship also plays a key role, as Jackson is a heavily Democratic city in a Republican-led state. While the city blames the state for the lack of proper funding, some state leaders have criticized the Jackson city government for “mismanaging” the treatment plant for years.17  With little political willpower by the state to provide funding, Jackson is caught in a cycle of suffering.

President Joe Biden has directed the Federal Emergency Management Agency to help Jackson, and Mississippi is set to receive $429 million from the bipartisan infrastructure law, but still more is needed to repair the water system, rebuild trust, and truly solve this problem.18

« A Renewed Labor Movement?
Back to all Posts
Understanding the Iranian Hijab Protests »