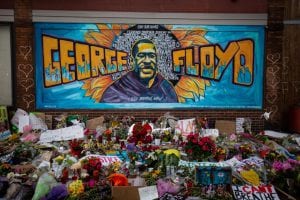 This summer has been more dramatic and more tumultuous than any other in recent memory. To help teachers and students explore key issues from this summer, we have done a series of summer round-up articles including developments related to the COVID-19 pandemic and our review of the 2020 campaigns and conventions. In our third and final summer round-up, we examine the protests and policy responses since Minneapolis police killed George Floyd in May. The police shooting of Jacob Blake in Kenosha, Wisconsin, reinvigorated the protests and demands for reform and justice.1

A Summer of Protests

Over the course of the summer, protests broke out and continued around the country. In major cities such as Portland, Oregon,2 and Louisville, Kentucky,3 protests have been daily or almost daily. The protests have ranged in their intensity and have evoked a wide array of responses from the media and public officials. Federal agents used tactics that raised alarm bells in Portland, grabbing suspected protesters from off the street in unmarked vans. Some called these actions kidnapping,4 and evidence suggests that they escalated the tension and violence in that city.5

LISTEN: From The Daily, “The Showdown in Portland”

In some cases, protests have coincided with violence and looting, frequently distracting the media and the public from the protesters’ cause.6 President Donald Trump has pointed to the violence as evidence that a greater police presence,7 and even a military presence,8 is needed. And, while polls showed that support for the Black Lives Matter movement was at an all-time high in the weeks following Floyd’s killing,9 that support has decreased as the protests have continued.10 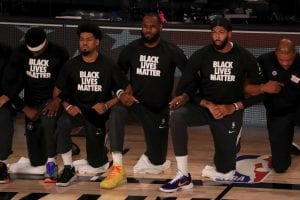 Activists and advocates across the country are working to identify ways to keep pressure on policymakers and to keep their cause in the public eye. On August 28—the 50th anniversary of the March on Washington for Jobs and Freedom at which Martin Luther King Jr. delivered his “I Have a Dream” speech—the NAACP and other groups coordinated a virtual March on Washington.11 The family of Blake, the man shot by police in Kenosha, participated in that march.12 Athletes have also used their platforms to raise awareness. The NBA’s Milwaukee Bucks decided to boycott a playoff game, ultimately leading to a brief shutdown of the league.13

The protests have continued to shine a light on police practices and procedures that activists believe to be unjust. Some jurisdictions have instituted reforms. Many states and cities have banned the use of chokeholds and similar tactics. Cities and states have passed bills to make it easier to hold police officers accountable for wrongdoing.14 There are also newly instituted bans on the use of tear gas and no-knock warrants,15 the latter of which played a role in the police killing of Breonna Taylor.16

However, larger, more significant reform efforts have stalled. For example, in California, lawmakers proposed several bills that would have made police departments and records more transparent and that would have created civilian oversight commissions to investigate alleged instances of police brutality. Legislators decided not to take up those bills before the end of the session.17 Virginia legislators considered, but ultimately rejected, a bill that would have ended qualified immunity for police officers.18 Qualified immunity, established by the Supreme Court in a 1967 ruling, shields public officials from legal suits if the plaintiff is not able to establish that a clear violation of rights occurred before the case begins.19 This practice makes it difficult for people to bring cases against police officers and other civil servants. A Reuters analysis of data from qualified immunity cases found that in more than half of cases, police officers were protected from prosecution by the statute.20

At the federal level, there are several bills that have been introduced and, in some cases, passed by the House of Representatives. One such bill, the George Floyd Justice for Policing Act, passed the House in June.21 If it became law, this bill would make it easier to investigate, indict, and convict police officers for use of excessive force and would grant the Department of Justice more authority in examining patterns of abuse in police departments across the country. This bill has been introduced, but not yet debated, in the Senate.

WATCH: From The Guardian, “What Does It Mean to Defund the Police?”

Defunding or abolishing police departments would be a significant change in state and local governments. It is a new idea to most Americans. Initial polling indicated that most Americans oppose the idea, but as people have learned more about it, those opinions have seemed to be in flux.24

WATCH: From PBS NewsHour, “Two Views on the Future of American Policing”

State and local governments across the country are grappling with questions about the future of policing, criminal justice, and issues pertaining to racial justice. And, during this election, some national politicians are calling for change at the federal level. Meanwhile, people across the country are protesting, hoping to keep these issues on the public agenda.

« Summer Round-Up #2: Campaigns, Conventions, and the Race to Election Day
Back to all Posts
Election 2020: Guides for Watching and Discussing the Debates »