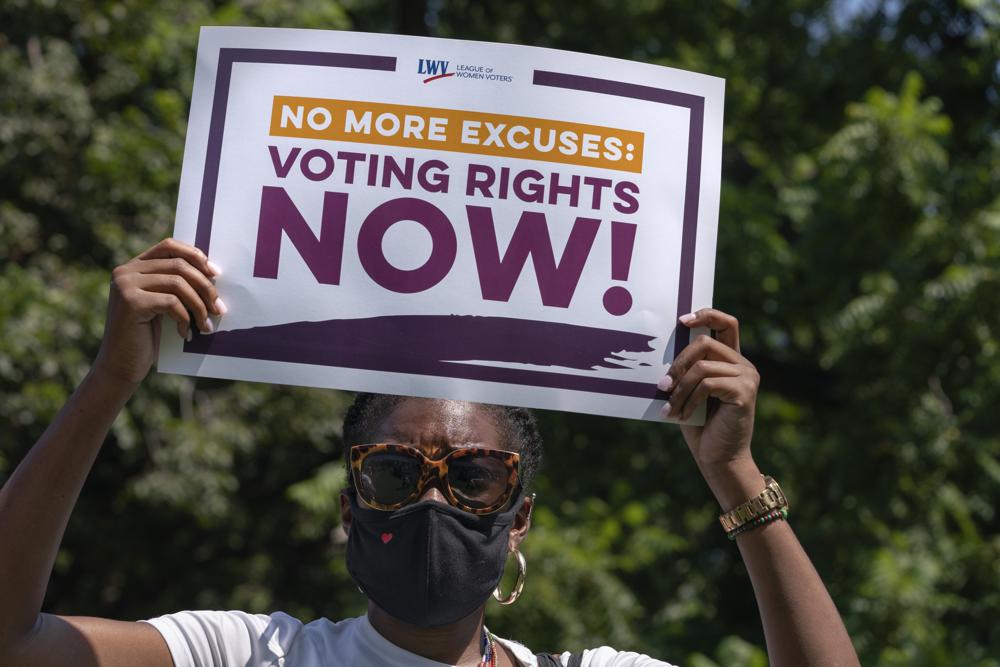 On Tuesday, August 24, the House of Representatives passed the John Lewis Voting Rights Advancement Act by a vote of 219-212.1 The bill is an attempt to reestablish some voting protections that the Supreme Court struck down as outdated and unconstitutional in its 2013 ruling in Shelby County v. Holder.2 The bill faces a steep climb in the Senate, where it may not receive a vote.3 The bill is named for John Lewis, the Georgia congressman, civil rights leader, and former chairperson of the Student Nonviolent Coordinating Committee who passed away in 2020.4

LISTEN: “The Right To Vote: The Impact Of Shelby County v. Holder on Voting Rights,” from NPR

In a written statement, Vice President Kamala Harris celebrated the passage of the legislation. “Congressman John Lewis was an American hero who dedicated his life to fighting for our nation’s highest ideals,” she said. “Today, the House of Representatives honored Congressman Lewis by passing his namesake legislation, which restores and expands the historic Voting Rights Act. This important step represents progress, but there is more work to do. The Senate must pass the John R. Lewis Voting Rights Advancement Act so it can become the law of the land and protect voters across the country.”5

What Is in the John Lewis Voting Rights Advancement Act?

The legislation restores “voting rights protections that have been dismantled by the Supreme Court. Under the proposal, the Justice Department would again police new changes to voting laws in states that have racked up a series of ‘violations,’ drawing them into a mandatory review process known as ‘preclearance.’”6 Essentially, it would require certain jurisdictions “with a history of racial discrimination in voting” to get permission from the Department of Justice to make changes to their voting rules.7

What Are Supporters Saying?

Representative Terri Sewell, D-Ala., argued, “When we see states running amuck, we need federal oversight. If it wasn’t for federal oversight, we not only would not have gotten the Voting Rights Act, we wouldn’t have gotten the Civil Rights Act. After the Shelby v. Holder decision, we saw states like North Carolina and Texas reinstate restrictive voting laws and those voting laws are suppressive, oppressive, and depressive. They stop the people who need to vote from voting.”8

Speaker of the House Nancy Pelosi, D-Calif., said Congress had “not only an ironclad Constitutional mandate, but a moral responsibility” to pass the bill. “We should have the right to vote and shouldn’t be diminished by anyone. It is unpatriotic to undermine the ability of people who have a right to vote, who have access to the polls,” she said. “As John knew, this precious pillar of our democracy is under attack from one of the worst voter suppression campaigns since Jim Crow.”9

In an op-ed for the Washington Post, Attorney General Merrick Garland contended that the Voting Rights Act’s “preclearance” provision was “enormously effective” and helped block “thousands of discriminatory voting changes that would have curtailed the voting rights of millions of citizens in jurisdictions large and small.”10

What Are Opponents Saying?

For the most part, Republicans are not supporting the legislation and will likely filibuster the bill in the Senate. As the bill was being considered in the House, Representative Rodney Davis, R-Ill., the top Republican on the House panel that oversees federal elections, denounced the legislation as a “federal takeover” of elections and a “partisan power grab.”11

Representative Michelle Fischbach, R-Minn., said the bill would make it easier for advocacy groups and lawyers to “file as many objections as possible to manufacture” lawsuits. “It empowers the attorney general to bully states.”12

Senate Minority Leader Mitch McConnell, R-Ky., called the bill “unnecessary” because “it’s against the law to discriminate in voting on the basis of race already.” Furthermore, he said it would “grant to the Justice Department almost total ability to determine the voting systems of every state in America.”13

The bill still has significant hurdles to clear in the Senate. So far, Senator Lisa Murkowski, R-Alaska, is the only Republican senator who has indicated she will support the bill.14 There remain opportunities for citizens to weigh in by contacting their senators.

« The House Passes a $3.5 Trillion Budget Framework
Back to all Posts
The United States’ Exit from Afghanistan »