Restoring Confidence or Destroying Democracy? The Fight Over Access to the Ballot 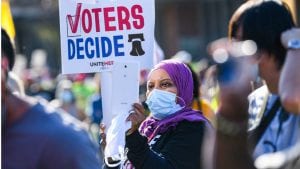 The past several election cycles have seen high-stakes fights over access to the ballot and the rules that govern elections. In 2013, the Supreme Court invalidated provisions of the Voting Rights Act, thus making it easier for states to change their voting laws.1 In the years since, conservatives in Congress and in state legislatures have argued in favor of policies that tighten voter ID requirements and voting processes.

Since the 2020 election, lawmakers in state legislatures have introduced at least 165 proposals that would in some way restrict access to the ballot.2 In Georgia, for example, Republican lawmakers passed a bill that would “require a photo ID for absentee voting, limit the amount of time voters have to request an absentee ballot, restrict where ballot drop boxes could be located and when they could be accessed, and limit early voting hours on weekends, among many other changes.”3

FIND OUT: Are there new voting-related bills in your state? See the Brennan Center’s tracker.

The Georgia legislation does not state that it is intended to help Republicans, but critics of the bill point to data from the state’s 2020 Senate elections, showing that a disproportionate amount of Democratic voters used absentee ballots and that many Black voters cast their ballots on Sunday as part of “souls to the polls” campaigns.4 Critics also argue that voter ID laws discriminate against the poor, college students, the elderly, and people of color.5 Supporters, on the other hand, argue that voter ID provisions are a commonsense measure to ensure the integrity of voting and to prevent fraud.

What is Congress Doing?

While many states are considering new voting laws, there is also action taking place in Congress. The House of Representatives just passed HR 1, the For the People Act. If enacted, this bill would:

Although popular among Democrats in Congress, HR 1 is unlikely to pass the Senate without significant changes to address Republicans’ concerns. To address those concerns, Senator Rick Scott, R-Fla., introduced the Save Democracy Act at the end of February. That bill would:

“We have a crisis of faith in our electoral process, and maybe Congress’s most important job in 2021 is to restore that trust,” said Representative Jim Banks, R-Ind., arguing in favor of the Republican bill. “The Save Democracy Act is a way for Congress to go beyond reassurance and prove that our elections are secure. Americans know common-sense reforms like citizenship verification and poll-watchers will make our elections safer. Democrats’ election bill, H.R. 1, would do the opposite by banning things like signature verification for absentee ballots. The contrast between each party’s agenda has never been clearer.”8

The issue is complicated, and this is a particularly challenging time to work to address it. A February Associated Press poll showed that 65 percent of Republican voters do not believe the 2020 election was legitimate.9 Some elected Republican officials, including members of Congress, do not accept President Joe Biden’s victory as legitimate.10

Furthermore, many Democrats do not believe that Republicans are arguing in good faith. They point to past comments made by Republicans who acknowledged that their main goal was to suppress minority and youth turnout so they could win elections. For example, Mike Turzai, a Republican state legislator in Pennsylvania, said that the goal of a 2012 voter ID bill was to help “Governor Romney win the state of Pennsylvania.” Former Florida Republican Party chairman Jim Greer said, “The Republican Party, the strategists, the consultants, they firmly believe that early voting is bad for Republican Party candidates. It’s done for one reason and one reason only.” Consultants told him “we’ve got to cut down on early voting because early voting is not good for us. [This is not] a fraud issue. It’s all a marketing ploy.”11

In this atmosphere, where the two parties are accusing each other of making voting reforms that improve their own political fortunes, it is not clear that they will be able to reach an agreement on significant legislation—even though both parties agree that reform is needed.

« Addressing Economic Inequality: Elizabeth Warren’s Wealth Tax Proposal
Back to all Posts
How Can We Overcome Vaccine Skepticism? »