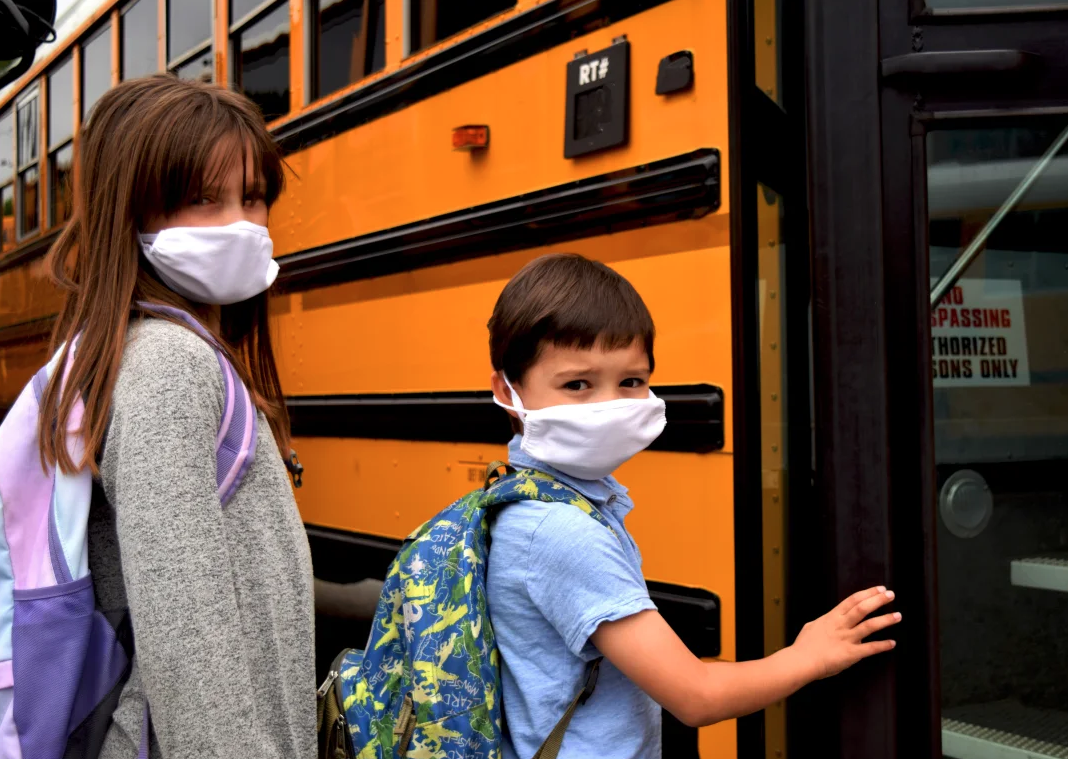 As teachers welcome students back into the classroom, it is important to establish good habits and routines for the new school year. One important habit is incorporating current issues discussions into civics, social studies, and humanities courses. To help teachers get started on the right foot, we’re offering a round-up of some of the most important news stories of the past month and some discussion questions to engage students.

President Joe Biden’s administration cleared an important hurdle in its efforts to pass a massive infrastructure bill through Congress with a 69-30 vote in the Senate. Although the $1.2 trillion bill still needs House approval before the president can sign it, it has the potential to be the largest infrastructure investment ever passed by Congress.1

The bill needed at least 60 votes to pass the Senate. The Senate is currently split 50-50 between Republicans and Democrats, with Vice President Kamala Harris acting as the tie-breaking vote. This breakdown, combined with Republicans’ use of the filibuster, means that for virtually any legislation to pass the Senate, Democrats must gain the support of at least 10 Republican senators.2 Given how strong the partisan divide in Congress has been for more than a decade, many Americans were skeptical that the Senate could reach any bipartisan agreement, with some urging senators to abolish the filibuster requirement of 60 votes. To the surprise of many, Senate Democrats were able to secure the support of not just ten but 19 Republican senators.3

LEARN MORE about the infrastructure bill and related issues

With the bill now in the House, it is almost a certainty that it will eventually pass but it remains unclear how long that will take and what the bill will contain by that time. Currently, the bill allocates funding for building new roads, bridges, and railways; repairing existing transportation infrastructure; and expanding broadband internet, clean air and water infrastructure, power systems, and pollution clean-up.4 The bill also represents a significant scaling back of the original $2.6 trillion plan, with the biggest changes being in the removal of many of the environmental initiatives.

House Democrats, including Speaker of the House Nancy Pelosi, D-Calif., have said they will not support the new infrastructure bill unless much of the removed environmental funding is added to a $3.5 trillion budget reconciliation bill. Negotiating this process could take weeks if not months. However, since budget reconciliation bills require only 50 votes in the Senate, much of the additional spending could be signed into law with or without Republican support.5

Afghanistan Withdrawal and the Taliban Offensive

In April 2021, President Biden announced that he would press ahead with the withdrawal of all remaining U.S. troops from Afghanistan, a move first sought by President Donald Trump’s administration. President Biden set September 11, 2021, as the deadline for withdrawal, coinciding with the 20th anniversary of the 9/11 attacks (which were the impetus for the conflict).6 The United States has had combat troops continuously operating in Afghanistan since October 7, 2001, making this conflict the longest continuous military conflict in U.S. history.7 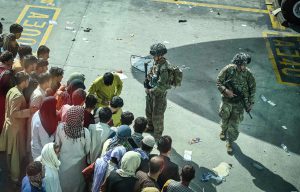 In recent weeks, the Taliban, a militant group of Islamic fundamentalists, has launched successful offensives across Afghanistan as U.S. troops and officials have withdrawn. Prior to the war in Afghanistan, the United States assisted the Taliban in its efforts to combat an invasion by the Soviet Union in the 1980s. After repelling the Soviets, the Taliban became the ruling authority during the 1990s. The group also forged connections with and harbored al-Qaeda, the terrorist organization controlled by Osama bin Laden that carried out the 9/11 attacks.8

LEARN MORE about the modern history of Afghanistan

The U.S.-led invasion of Afghanistan overthrew the Taliban in 2001. However, despite U.S. support over the past 20 years, the new government of Afghanistan has struggled to govern the country effectively as it has been plagued by corruption and infighting. The U.S.-trained Afghan military and police forces have not fared any better, offering little resistance to the Taliban’s resurgence. In recent days, the Taliban seized control of Kabul, the Afghan capital, and declared itself the only legitimate government of the country.9 Many Afghanis who worked with U.S. forces now fear for their lives, as the Taliban is notorious for torturing and executing those whom it considers to be traitors.10 The swift pace of the Taliban takeover, downplayed as “highly unlikely” by President Biden in July, has prompted both the United States and the United Kingdom to deploy thousands of additional troops to Afghanistan to protect evacuation efforts out of Kabul.11

LEARN MORE directly from lawmakers about the withdrawal from Afghanistan

The Delta Variant and Mask Mandates

On May 13, 2021, President Biden celebrated an end to nearly all outdoor mask mandates and most indoor mask mandates for individuals fully vaccinated against COVID-19. This announcement was heralded as a turning point on the road “back to normal.”12 However, as a vaccination rates began to plateau, it became apparent that a significant portion of the U.S. population (18 percent) had no intention of getting vaccinated.13 Disease experts feared that with such a large cohort of people refusing the vaccines, COVID-19 would continue to mutate and spread.14

There have been dozens of such mutations, with more virulent and contagious strains emerging. Particularly widespread in the United States and abroad is the Delta variant and its subvariants. The Delta variant is estimated to be twice as contagious as other variants, with some data suggesting it might cause more severe illness in unvaccinated persons than previous strains.15 It is important to note that all available data indicates that the COVID-19 vaccines are highly effective against the Delta variant. Almost all COVID-19 cases, hospitalizations, and deaths have occurred among people who are not vaccinated or not yet fully vaccinated.16 Still, as infection and hospitalization rates rose, the Centers for Disease Control and Prevention (CDC) updated its guidance for indoor masking and social distancing.

LEARN MORE about the impact of vaccination

In August, Arkansas set a record for hospitalizations, while health officials in Mississippi said that the state’s hospital system could collapse in a matter of days if the current caseload trajectory continues.17 This resurgence of COVID-19 cases across the country has prompted some areas to issue new mask mandates and others to refuse to issue new rules that follow federal guidance and CDC recommendations.18 Recently, some schools in Texas, Florida, and other highly impacted states refused to comply with their governors’ bans on mask mandates. And some schools and businesses around the country have begun to mandate vaccination for their employees and patrons.19

HEAR FROM lawmakers about the impacts of COVID-19 on students

On August 9, 2021, the United Nations’ Intergovernmental Panel on Climate Change (IPCC), a group of thousands of climate experts from 195 member nations, issued a dire report on the state of Earth’s climate and its implications for humanity’s immediate and long-term survival.20 The report states that human beings are “unequivocally” causing climate change and that the world may inevitably cross the 1.5oC overall temperature increase that has long been cited as a point of no return by climate scientists.21

Drawn from data from over 14,000 studies, the IPCC report details that once-in-50-year heatwaves now occur at least once a decade, and that historic flooding, hurricanes, and drought are to be expected for decades if not centuries to come. UN Secretary General António Guterres called the report a “code red for humanity.”22

Currently, vast stretches of the North American Pacific Coast, Siberia, the Mediterranean, and dozens of other places are experiencing wildfires of unprecedented scope.23 In July, historic flooding occurred in Western Europe, killing more than 200 people with almost 200 more still missing.24 And with the COVID-19 pandemic still ongoing, disease and climate experts warn that climate change will contribute to new outbreaks of illnesses, particularly as mosquito populations spread with warmer weather.25

Leaders from around the world will meet in Glasgow, Scotland, in November 2021 for a climate change conference. Climate activists and scientists are hopeful that leaders will be receptive to more aggressive policies to cut down on carbon emissions. The United States rejoined the Paris Agreement in February 2021, but climate advocates now argue that the targets set under that agreement are inadequate.26

VIEW the IPCC report and its implications

Build it and They Will Come – The Biden Infrastructure Plan

« Extended Unemployment Benefits: Helping Workers or Holding the Economy Back?
Back to all Posts
The House Passes a $3.5 Trillion Budget Framework »