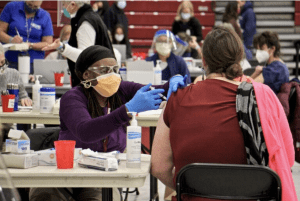 There’s been a lot of good news in the fight against COVID-19. The United States has authorized three vaccines for emergency use and drastically ramped up the distribution to states while increasing the administration of doses.1 More than 107 million shots have already been given, with an average of 2.3 million per day.2 President Joe Biden announced that with this increased supply, any adult who wants a vaccine will be able to sign up by May 1, months ahead of previous estimates.3

For all of the progress made with the vaccines—and the demand for them—there are still challenges in getting every American vaccinated. One third of troops have turned down the opportunity to receive a vaccine.4 Nearly 60 percent of nursing home staff have done the same.5 Forty percent of Republicans do not plan on receiving shots.6 Overall, one in four Americans are skeptical of the vaccines, saying they would rather wait to receive one or outright refuse it.7 Some people are wary of the effectiveness or dosage requirements, preferring one vaccine over the others. Some are concerned about safety, as the vaccines were developed and approved in a short period of time compared to the usual process, which can take years.8 Disinformation about vaccines, coupled with political polarization, has caused mistrust of drug manufacturers, government institutions, and authority figures. Others may not see the urgency to receive a vaccine if their community has few COVID-19 cases, or they may prioritize their freedom of choice above all else.

In order to reach herd immunity, prevent infections, and bring an end to the pandemic, everyone must play their part. So, what should be done to encourage Americans to receive the COVID-19 vaccine? Here are three ideas:

Professionals in the scientific and medical fields are the premier experts when it comes to the pandemic. They’ve spent their lives studying, researching, and working with infectious diseases. By making themselves known and accessible to the public, just as Dr. Anthony Fauci did when he appeared on “The Late Show with Stephen Colbert,” they help Americans get a better understanding of the importance of vaccines.9 For his part, Dr. Fauci remains a trusted figure with a 72 percent approval rating.10

Advocates of this approach believe that notable experts should be the leading voices in communicating the need to get vaccinated. When the Centers for Disease Control and Prevention (CDC) issued guidelines for fully vaccinated people in early March, it provided a preview of a return to normal life—something people could look forward to, get excited about, and be encouraged by.11 Dr. Rochelle Walensky, director of the CDC, even appeared in a brief, engaging video on YouTube to answer common questions about the vaccines so people could get the information they need.12

However, general confidence in these medical experts has decreased, especially among Republicans.13 The language and terminology that the medical community uses is not always the easiest for the general public to understand, and some people still fault medical experts’ evolving guidelines, based on emerging information, as untrustworthy.

Public figures can greatly influence the behavior of the people who look up to them. Just recently, a bipartisan group of former presidents and first ladies—from the Carters to the Obamas—released a video in which they urged every American to get vaccinated, just as they had done.14 President Biden and Vice President Kamala Harris also received their vaccines publicly, live on television. But influence is not limited to those in politics; celebrities are just as influential, if not more so.

Arnold Schwarzenegger “had a cool zinger after getting his shot. He squinted at the camera and growled a catchphrase from Terminator 2: Judgment Day: ‘Come with me if you want to live.’”15 Dolly Parton sang her song “Jolene” before she received hers, substituting the word “vaccine” and encouraging her fans to follow her example.16 This strategy is nothing new. In fact, Elvis Presley received his polio vaccination on television, as part of a sweeping vaccination campaign that helped increase the public’s trust in the science.17 Famed NBA star Kareem Abdul-Jabbar has proposed letting NBA players “jump the vaccine queue” for this very reason, noting that “health policy professionals suggest that public health campaigns using celebrities should focus on celebrities who are influential in particular communities in order to build trust.”18

However, this strategy runs the risk of perpetuating the idea that celebrities and the well-connected get preferential treatment solely because of their wealth or status. It could further create distrust in the distribution of vaccines if the process seems inequitable.

Local community leaders know their residents better than anyone else. They have existing relationships and strong ties with the people around them. In turn, people look to their local leaders for guidance and support. In San Jose, California, local activists have been going door-to-door in Black and Hispanic communities to combat vaccine misinformation.19 As one activist explained, “They’ve read all this stuff online, from different news sources, which is confusing. But then they meet me, as someone who has had the shot, and I can give them some real answers.”20 These conversations show that if the vaccine is good enough for someone they know, then it must be good enough for them too.

The same tactics are being utilized by Black churches, which have strong ties to civic action in their communities. Just as initiatives such as “souls to the polls” drive Black voter turnout during election season, churches are looking to increase the vaccination rate of their congregations. One hesitant church-goer in Chicago explained why he decided to get the vaccine. “So, because it’s coming from the church, I decided I would take it—and take my mother to get hers. I am trusting the people I trust. That’s what it came down to. And it was impactful that I heard it from many pastors.”21

However, this strategy is dependent on organizations and leaders that are already established in a community, which drastically vary from place to place. Different demographics of people may require different resources, as there is not a universal model that applies to every community.

[9] The Late Show with Stephen Colbert via YouTube: https://www.youtube.com/watch?v=iurgxEmPlnI

« Restoring Confidence or Destroying Democracy? The Fight Over Access to the Ballot
Back to all Posts
The 50th Anniversary of the 26th Amendment »