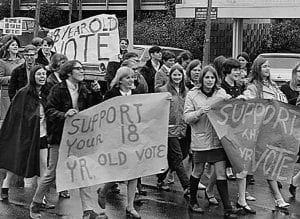 Congress passed the 26th Amendment in March 1971; it was ratified by the states and signed by President Richard Nixon by July of that same year.1 The amendment lowered the voting age to 18. It reads:

The Congress shall have power to enforce this article by appropriate legislation.2

The movement to lower the voting age from 21 to 18 was the product of several decades. In 1942, Representative Jennings Randolph, D-W.Va., introduced the first federal legislation to lower the voting age to 18, arguing, “They possess a great social conscience, are perplexed by the injustices in the world and are anxious to rectify those ills.”3 During World War II, advocates used the slogan, “Old enough to fight, old enough to vote.”4 This slogan became a rallying cry during the Vietnam War because of that war’s unpopularity.5 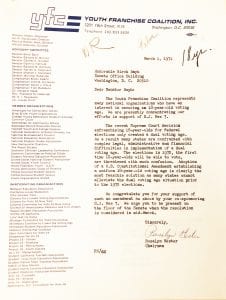 Debates over access to the ballot remain a central feature of U.S. democracy. Recently, Republicans have proposed at least 250 state laws that would make voting requirements stricter in various ways, while Democrats in Congress are promoting federal legislation to increase voter registration, soften voter ID laws, and require states to make voting more convenient.6 For more on this, see our March 8 post on competing election reform proposals.

READ: From the Current Issues Blog, “Should the Voting Age Be Lowered to 16?”

As debates about elections and voting continue, it is important to pause and reflect on the turning points like the 26th amendment that expanded suffrage in U.S. elections.

This year marks 50 years since the passage and ratification of the 26th Amendment, which lowered the voting age to 18 in all 50 states. Join us for a conversation this Thursday, March 25, on the importance of this amendment, how young voters have grown over time, and how to engage young people in our democracy.

« How Can We Overcome Vaccine Skepticism?
Back to all Posts
Women: A Majority in the United States, A Minority in U.S. Government »