The 14th: Why A Reconstruction-Era Amendment is in the News 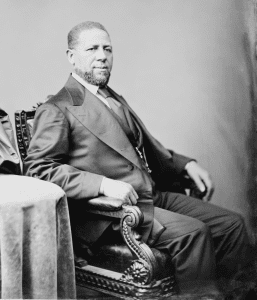 Now that former President Donald Trump’s second impeachment trial has concluded with another acquittal, some lawmakers and voters remain unsatisfied with the results.1 Had President Trump been found guilty by the Senate, he would have been barred from holding federal office again in the future. With an acquittal, President Trump remains eligible to run once again in 2024, as many have speculated he plans to do.2

Reconstruction and the History of Section 3

Originally, Section 3 was included in the 14th Amendment to protect post-war reforms in the South by barring members of Congress, state government officials, and military leaders who had sided with the Confederacy from holding office in the future.7 The 14th Amendment also helped lift some of the barriers to Black Americans holding federal office.

For the brief period of 1870-1887, Black senators and representatives served in the halls of Congress, beginning with Senator Hiram Revels of Mississippi and Representative Joseph Rainey of South Carolina, both of whom were elected in 1870. Also during this period, Senator Blanche K. Bruce of Mississippi would serve a full term and an additional 15 Black congressmen would serve.8

However, most of their tenures in office were brief, as the resurgence of white supremacists in Southern governments saw them removed from office or defeated in elections. As Reconstruction ended, marked by the withdrawal of federal troops from the South, nearly all of these senators and representatives were out of office by 1876. Black Americans were sporadically elected to the House of Representatives until 1901, but their time in office was usually brief. It would not be until 1943 that more than one Black representative served in Congress again with any consistency. Another Black senator was not elected until 1966—more than 90 years after Senator Bruce’s term ended.9

In the wake of the Capitol attack, some lawmakers believe the language of the 14th Amendment gives them the power to prevent President Trump’s return. However, opponents and even neutral legal scholars have raised several issues with this argument. First, the 14th Amendment specifies that a two-thirds vote in both the House and the Senate could undo someone being barred from office on these grounds, but it offers no formal process for barring them to begin with. Second, the language of the 14th Amendment is tied to “a Senator or Representative in Congress, or elector of President and Vice President,” but it makes no direct mention of the office of the president itself.10 To combat this argument, proponents of invoking the 14th Amendment cite the rest of the clause, which states “or hold any office, civil or military, under the United States.” It could be argued that the president, as a civilian leader and commander-in-chief of the military, falls under this category.11

Yet with the impeachment trial now concluded with an acquittal, the validity of invoking the 14th Amendment becomes even less clear. Under its tenets, barring someone from office requires them to have taken an oath to support the Constitution and “have engaged in insurrection or rebellion against the same.” President Trump most certainly took that oath when he was sworn in as president, but he has been constitutionally acquitted of having engaged in insurrection.12

How Would You Vote in the Senate Impeachment Trial?

« The Debate Over School Resource Officers and the #CounselorsNotCops Campaign
Back to all Posts
156 Years and Counting: Reparations for Slavery in 2021 »