Historic Second Impeachment, Part One: Questions of Constitutionality and Unity 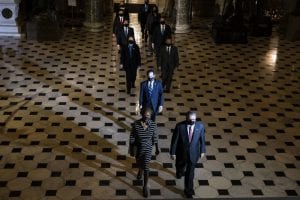 Last week, the House of Representatives delivered an article of impeachment to the Senate, accusing former President Donald Trump of inciting violence against the U.S. government on the basis of his actions relating to the January 6 storming of the Capitol.1 Already the first U.S. president to be impeached twice, President Trump will also become the first to face a Senate trial after leaving office.2 Before the trial starts on February 9, members of Congress face a unique historical and political context as they consider whether they can, and should, convict a former president.3

One week after the Capitol riot,4 ten House Republicans joined with Democrats to impeach President Trump, making it the most bipartisan impeachment vote in U.S. history.5 However, for the evenly split Senate to reach the two-thirds majority required to convict, 17 Republican senators would need to join with every member of the Democratic caucus.6 A Senate vote on January 26 cast doubt on that scenario.7 Although Democrats quashed an attempt led by Senator Rand Paul, R-Ky., to declare the upcoming trial unconstitutional, only five Republicans joined them,8 prompting Paul to characterize the upcoming case as “dead on arrival.”9

Most Senate Republicans have echoed conservative legal scholars, arguing that the trial is unconstitutional10 because its primary purpose is to remove a sitting president.11 They contend that the Senate’s constitutional impeachment and removal powers do not extend beyond the incumbent office holder.12 Senate Majority Leader Chuck Schumer, D-N.Y., has said that this argument “defies basic common sense.”13 Like-minded law professors point to the constitutional provision which allows the Senate to disqualify a convicted president from seeking office again—a separate consequence that would still apply in this case.14

A bipartisan group of over 150 constitutional law scholars (including members of the conservative Federalist Society) signed a letter highlighting disqualification as “an important deterrent against future misconduct.”15 Without it, they warned, “an official who betrayed the public trust and was impeached could avoid accountability simply by resigning one minute before the Senate’s final conviction vote.”16 An example of both points arose in 1876, when the Senate tried a secretary of war after he resigned his office in a failed attempt to avoid the trial.17

The Congressional Research Service (CRS) has weighed the 1876 example against cases in which resignation did indeed halt impeachment proceedings.18 CRS details how the judicial branch, out of concern for the separation of powers, would not review the Senate’s judgment on matters of impeachment.19 Many legal experts agree that senators could set aside facts and vote to acquit if they thought the Senate lacked jurisdiction to convict a private citizen.20 Such a determination would neither depend upon nor establish a precedent.21

Many Republicans also argue that a trial will sow further division and undercut cooperation with President Joe Biden’s agenda22 and calls for unity.23 Senator John Cornyn, R-Texas, cautioned of possible partisan retribution if former officials become open to impeachment trials,24 at one point musing, “Could we go back and try President Obama?”25 Senator Marco Rubio, R-Fla., has called the trial “counterproductive,” believing it will further “fuel these divisions that have paralyzed the country.”26 But Democrats have dismissed those claims, emphasizing the importance of holding President Trump accountable for the insurrection.27 According to Schumer, “Healing and unity will only come if there is truth and accountability. And that is what this trial will provide.”28

Check the websites of your state’s two senators to learn their thoughts on the constitutionality and value of a Senate trial. Contact them to share your opinions on the Senate trial and your thoughts about the goals of national unity and accountability for insurrection. Find contact information here:

Have students read a pair of opinion pieces on whether the Senate trial is constitutional, and ask them which side is more convincing.

« The Inaugural COVID-19 Memorial
Back to all Posts
Historic Second Impeachment, Part Two: Questions of Crime and Punishment »