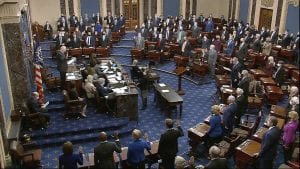 This week, the Senate commences an historic second trial of former President Donald Trump, stemming from his actions pertaining to the January 6 Capitol riot.1 Against a backdrop of heightened security, threats made against members of Congress,2 and tensions within the Republican Party,3 senators must determine President Trump’s innocence or guilt, as well as what consequences, if any, he should face. Their decisions may affect elections for years to come.4

The Constitution allows impeachment for “Treason, Bribery, or other high Crimes and Misdemeanors.”5 The document does does not specifically list those offenses, leaving it to Congress to determine what exactly merits impeachment and conviction.6 The charge by the House of Representatives, “incitement of insurrection,”7 uses language from Section 3 of the 14th Amendment,8 likely foreshadowing certain members’ hopes to disqualify President Trump from holding future office.9 That possibility could turn on whether or not senators find President Trump guilty of incitement.10

The constitutional right to free speech11 sets a high bar for what is considered incitement.12 To qualify as unprotected, criminal speech, President Trump’s words would have needed to encourage immediate lawbreaking and to be likely to produce that lawbreaking.13 While separate criminal charges for incitement are theoretically possible14 (but unlikely15), they are not part of the Senate trial, so senators can decide individually if they want to use the criminal burden of proof or a different, lower standard.16

House Democrats contend that First Amendment protections should not allow a government official to abuse their power and avoid impeachment.17 They argue, on the basis of President Trump’s January 6 speech,18 that his responsibility for the attack is “unmistakable.”19 President Trump’s legal team denies those claims, arguing that those responsible—people who entered and vandalized the Capitol—are being prosecuted and that President Trump did not incite anyone to “engage in destructive behavior.”20 Some of the accused rioters seemingly disagree, blaming President Trump in their legal defense.21 President Trump’s lawyers also assert that the trial itself is unconstitutional22 (a debate addressed in a previous post), although Democrats have criticized this argument as a way for Republicans to avoid judging his words.23

In the event of a Senate conviction, President Trump would lose his post-presidency benefits (including his pension for security and travel expenses).24 An additional, simple-majority vote25 in the Senate could disqualify him from holding future office.26 If the Senate does not convict, President Trump’s opponents have considered trying to disqualify him from future elected office anyway, by using Section 3 of the 14th Amendment.27 This provision initially sought to keep leaders of the Confederacy28 (who had “engaged in insurrection or rebellion”29) from holding federal office.30 Experts caution that using this provision against President Trump would almost certainly result in lawsuits,31 as there is little historical precedent and no enforcement mechanism for Section 3.32 University of Chicago law professor Daniel Hemel notes that even if Congress does not pursue this path, citizens in some states could set off a similar legal battle by appealing to their board of elections to bar a candidate from the ballot.33 “All it takes is one registered Republican in New York state to say Donald J. Trump is not qualified to be president because he violated Section 3,” said Hemel.34

Contact your state’s two senators to share your opinions on whether or not they should convict President Trump of incitement of insurrection, and what (if any) penalties you think he should receive. Find contact information here:

Ask students to answer the following question in writing and/or deliberate in class: Based on this evidence, did President Trump incite an insurrection? Why or why not?

« Historic Second Impeachment, Part One: Questions of Constitutionality and Unity
Back to all Posts
Tackling Climate Change: Zero-Emission Vehicles »