Reparations and the Demands of Justice 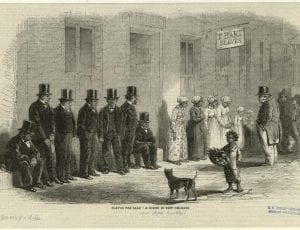 In January 2019, Representative Sheila Jackson Lee (D-Texas) introduced H.R. 40: The Commission to Study and Develop Reparations Proposals for African Americans Act.1 Reparations for slavery, Jim Crow, and systematic segregation and racism in major U.S. institutions is not a new idea, but it has never gained the type of traction that it currently has. In June, the House Judiciary Committee held hearings to begin exploring the idea.2

This bill would not automatically establish reparations. Instead, the bill would “establish a commission to study and consider a national apology and proposal for reparations for the institution of slavery, its subsequent de jure and de facto racial and economic discrimination against African Americans, and the impact of these forces on living African Americans, to make recommendations to the Congress on appropriate remedies.”3

WATCH: Ta-Nehisi Coates, author of “The Case for Reparations,” testifies before the House Judiciary Subcommittee on the Constitution, Civil Rights, and Civil Liberties

Discussions about race, racism, and racial justice are becoming more central parts of our political discourse. The rising tide of white nationalism and white supremacy,4 including their increasing visibility in public spaces,5 has helped spur discussion about the legacy of racism in the United States. Movements and organizations such as Black Lives Matter and the Equal Justice Initiative, as well as publications such as Between the World and Me, The New Jim Crow, and the 1619 Project, have focused attention the legacies of slavery, Jim Crow segregation, economic exclusion, and mass incarceration.

In this social and political environment, the debate over reparations is taken more seriously—but is also more contentious—than it has been at other times.

Arguments in support of the bill:

The text of the bill contains arguments—findings—that support passage of the bill. Among those findings are:

The debate over this issue is taking place in the primary campaigns of Democratic presidential hopefuls, and Congress will continue to consider and possibly vote on the bill.

Students can continue to follow the bill on GovTrack.

Students can weigh in—as a group assignment or individually—by visiting this page.

Students can also research their member of Congress to see which committees they sit on. If their representative sits on the Judiciary Committee, they should consider contacting that member while the bill is still in committee.

2 thoughts on “Reparations and the Demands of Justice”

« Religious Freedom or the Right to Discriminate?
Back to all Posts
Migrant Detention and Congressional Oversight »