The full name of the HOMESTEAD Act is the Help Oversee, Manage, and Evaluate Safe Treatment and Ensure Access without Delay Act of 2019. The name comes from the Homestead shelter for migrant children. 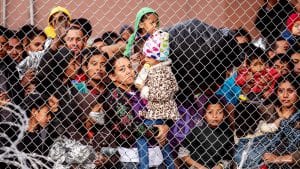 In addition to expressing concerns about oversight, some members of Congress have criticized the Trump administration for its detention policies.3 Researchers argue that the detention of children will have long-term mental and emotional effects.4 In fact, the administration’s own Department of Homeland Security issued a report that was deeply critical of conditions at four separate detention centers.5

This bill aims to address these conditions. The bill would:

But the Trump administration argues that by detaining families and making illegal immigration more daunting and difficult, it will deter the practices of illegal immigration. “One of the things that will happen, when they realize the borders are closing—the wall is being built, we are building tremendous numbers of miles of wall right now in different locations—it all comes together like a beautiful puzzle,” said President Trump.8

For this reason, and to avoid having to release undocumented families into the United States while their court cases are considered, the Trump administration is considering a rule change that would allow for indefinite detention of migrant families.9 Twenty states are currently suing the administration to block the rule change.10

Thus, there is presently much action taking place in the area of immigration policy, but it is unclear what changes will come in the months ahead. Next week, we will examine two Republican proposals to address concerns over immigration.