Over one million workers, students, and others engaged in the global climate strike on Friday, September 20, in an effort to call for more significant action to combat climate change.1 This was the third in a series of worldwide strikes organized by students; the rally was planned to coincide with the United Nations Climate Action Summit.2 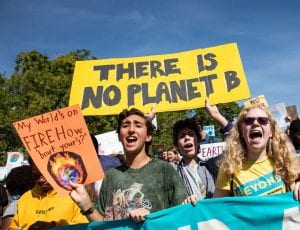 What are the students’ demands?

The organizers of the strike state their demands as follows:

“The climate crisis is an emergency – we want everyone to start acting like it. We demand climate justice for everyone. Our hotter planet is already hurting millions of people. If we don’t act now to transition fairly and swiftly away from fossil fuels to 100% renewable energy for all, the injustice of the climate crisis will only get worse. We need to act right now to stop burning fossil fuels and ensure a rapid energy revolution with equity, reparations, and climate justice at its heart.”3

At the New York City rally, marchers chanted, “You had a future, and so should we.”4

Many young people in the United States and many people the world over are upset that policymakers are not seriously addressing climate change. Recent reports from the UN and the U.S. government, among others, have called attention to the dire challenges of climate change. The U.S. government’s National Climate Assessment declares, “Climate change creates new risks and exacerbates existing vulnerabilities in communities across the United States, presenting growing challenges to human health and safety, quality of life, and the rate of economic growth.”5 The UN Intergovernmental Panel on Climate Change says that “[f]uture climate-related risks depend on the rate, peak, and duration of warming,” and that it is too late to avoid some, but not all, of the impacts of climate change.6

Greta Thunberg, a 16-year-old Swedish activist, spoke for many young people when she said, “You all come to us young people for hope. How dare you. … You have stolen my dreams and my childhood with your empty words.”7

What else is being done?

In the United States, there is a court case, Juliana v. United States, that argues that there is a fundamental right to a stable, livable climate and that the U.S. government is denying young people that right.8 The case began in 2015, with the most recent action taking place in June 2019. There will likely be continued climate efforts in the courts, as many are frustrated with elected officials’ lack of progress.

Climate change legislation is also a frequent subject of debate among presidential candidates, and CNN hosted a town hall on the subject with 10 Democratic candidates.9 A major focus of debate on the campaign trail and on Capitol Hill is the Green New Deal.

See our post about the Green New Deal here

To investigate this topic further, please see our resource on climate change here.

« Migrant Detention and Congressional Oversight
Back to all Posts
Eliminate Illegal Immigration; Make Immigration Work for the Economy »