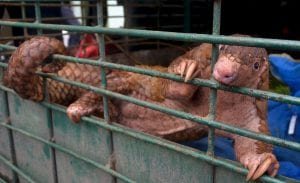 The COVID-19 (coronavirus) outbreak is believed to have started at a wildlife market in Wuhan, China, in December 2019. It is unclear which species transferred the virus to humans, but scientists largely agree on the point of origin.1 The 2002 outbreak of SARS, another type of coronavirus, began under similar circumstances.2

LISTEN: A 13-minute podcast from Scientific American on “COVID-19: The Wildlife Trade and Human Disease”

Some nations are already taking steps to ban the types of animal trade and markets that serve as hotspots for viral transmission from animals to humans. China announced a permanent ban on the wildlife trade in February, but the new law has loopholes that worry some conservationists.3 Vietnam has enacted a similar ban, and other neighboring nations seem poised to follow.4

VIEW: A series of infographics shows how the wildlife trade fits in the Chinese economy

Conservationists and animal rights activists have called for bans on the practice for decades, and now public health experts are joining that fight. “This issue is not just a conservation issue anymore,” said Grace Ge Gabriel of the International Fund for Animal Welfare. “It’s a public health issue, a biosafety issue and a national security issue.”5

In a powerful essay published by The Hill, Cyril Christo writes, “The coronavirus did not manifest from nowhere. Our sadistic treatment and manipulation of animals for centuries has come back to haunt us. It is time for humanity to absorb the lessons of the animal world.”6

Combating the wildlife trade will take significant energy and commitment from governments around the world. The livelihood of many people will be impacted as certain practices are outlawed,7 and the demand for the animals will likely remain, creating conditions for a thriving black market. Some of the ongoing animal trade was already illegal, but it persisted nonetheless.8

2 thoughts on “Humans, Animals, and Viruses”

« Gender, Identity, and Official IDs
Back to all Posts
Coronavirus, Prisons, and Detention Centers »