Using the Harkness Method to Teach the News 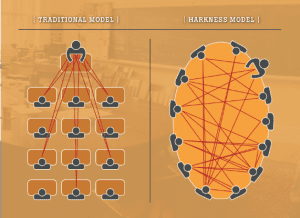 A Brief Introduction to The Harkness Method1

The Harkness method is a type of student discussion created at the Phillips Exeter Academy in 1930. At the time, most methods of education involved teacher-led lectures and rote memorization. But a wealthy philanthropist, Edward Harkness, promised a financial contribution of over $5 million (or almost $90 million in 2019 dollars2) to the school—if it adopted a revolutionary method of student-directed teaching in a “conference-like” atmosphere.3

“What I have in mind is [a classroom] where [students] could sit around a table with a teacher who would talk with them, and instruct them by a sort of tutorial or conference method, where [each student] would feel encouraged to speak up,” Harkness said of the school he envisioned. “This would be a real revolution in methods.” To bring this idea to life, the school used a portion of the money to change the classroom environment to suit student-centered instruction. Desks in rows became round tables, and class sizes of 25 to 35 were reduced to 12. Eventually, the now-signature Harkness table became oval, allowing the instructor to see and make eye contact with every student. The idea is that all people at the table are equal and, in the words of Harkness, “there are no corners to hide behind.”4

Exeter still uses the Harkness method today, in every subject. “What happens at the table is, as Harkness described it, ‘real revolution,’” the school notes. “It’s where you explore ideas as a group, developing the courage to speak, the compassion to listen, and the empathy to understand. It’s not about being right or wrong. It’s a collaborative approach to problem-solving and learning.”5 Exeter also offers an institute each year, bringing together more than 400 teachers to learn about implementing the method in their classrooms.6

Overview of the Method

In a traditional Harkness method, 12 students sit at an oval table with a teacher acting as the facilitator. The primary goal of the method is to place students in the driver’s seat of their learning and to make learning a more participatory process. To achieve this, students come to the table having read a piece of material as background (e.g. a primary source, a news article on a current event, or a piece of literature). They actively participate in a discussion about the content while the facilitator monitors.

On the surface, this may seem like the Socratic method, but there is a significant difference. In the Harkness method, the teacher must give up the need to “guide” students to the “right” solution and instead be an active participant in the discussion.7 A sign of a high-quality Harkness discussion would be one that requires little to no direction by the teacher; instead, the learning occurs student-to-student. During the discussion, the teacher uses various discussion tracking tools to monitor students’ participation and dialogue and to ensure that participants are following norms and staying on topic. They can track everything, including who has spoken, amount of speaking time, and body language, to see the quality of conversation and monitor student gains.

Using this Method to Teach the News

While most schools have much larger class sizes than 12 and rarely have large oval tables, you can make modifications to employ this method. For example, Chicago teacher Aida Conroy was able to implement the method in a class of 33 and saw tremendous gains in college-readiness test scores that surpassed the standard “college-ready” score.8

Suggested Steps for Employing this Method in a Modern Classroom

« President Trump Seeks to Further Reduce U.S. Military Presence in Syria
Back to all Posts
The Supreme Court Will Address DACA. What Will Follow? »