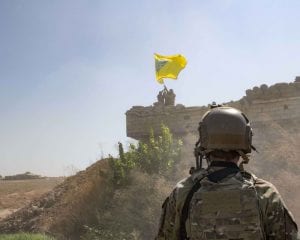 On October 6, 2019, President Trump made the surprising announcement that he would pull out most of the 1,000 U.S. troops in Syria, where the United States has been working with the Kurdish-led Syrian Democratic Force (SDF) to fight the Islamic State of Iraq and Syria (ISIS), al-Qaeda, and Syrian President Bashar al-Assad, and to repel Russian and Iranian influence in the region. Apparently, this announcement was made without the knowledge of most of President Trump’s cabinet, including the State Department.1

The Syrian civil war erupted in 2011, when government forces violently suppressed protesters who were calling for Assad to step down. The conflict has been deadly and devastating, resulting in six million Syrian refugees and another six million citizens internally displaced (out of a population of around 18 million people).2 The war has allowed for extremist groups, including ISIS, to gain power in the region; since 2014, the United States has partnered with the SDF to fight extremists and Assad’s forces.

However, Turkey—a NATO ally that is also fighting against Assad—has long considered the Kurds on their border to be a threat and have promised strikes against them in the last few months.3 The Kurds have benefited greatly from the partnership with the United States, which has allowed the formerly oppressed minority group to establish Kurdish schools and set policies that represent their interests.

Removing U.S. troops would allow Turkish forces to control the area in northeastern Syria along the Turkish and Iranian border, which is currently held by U.S. and SDF forces. Turkey presently claims that its goals include removing Kurdish forces from the area and resettling Syrian refugees along the border.

Throughout the week of October 6, U.S. troops have pulled back from the Turkish border. Increased violence in the region began almost immediately after President Trump’s announcement, and on October 9, the Turkish military fired shots in Syria. In response, the Kurdish authorities stated, “We call upon our people, of all ethnic groups, to move toward areas close to the border with Turkey to carry out acts of resistance.”4 ISIS suicide bombers have also attacked Kurdish positions in the Syrian city of Raqqa.5

President Trump’s withdrawal announcement met backlash from both Democrats and Republicans in Congress, with Senator Lindsey Graham, R-S.C., a strong Trump ally, calling the move “short-sighted and irresponsible.”6 Critics argue that Turkey is planning on diluting the power of the Kurds in their historic homeland by resettling millions of ethnic Syrians in the area.7

In order to keep Turkish forces from attacking Kurdish allied forces and the Kurdish population in the area, President Trump tweeted that he would, “totally destroy and obliterate” Turkey’s economy if they did anything “off-limits” after the United States pulls out. The Trump administration has said that the Kurdish alliance is complete and that the Kurds are strong fighters, “but were paid massive amounts of money and equipment to [fight against ISIS].” President Trump indicated that it is time for the United States to remove itself from the conflict and bring troops home.8