The Supreme Court Weighs the First Amendment and Minority Rights 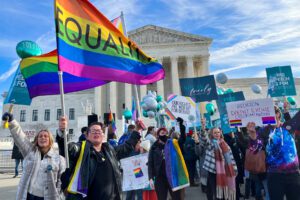 The case of a Christian website designer from Colorado who opposes same-sex marriage reached the Supreme Court on December 5. Because the Court said it would only address freedom of speech issues, the hearing pitted concerns over discrimination against freedom of artistic expression.1

Why Did This Case Reach the Supreme Court?

Lorie Smith wants to expand her web design business (303 Creative LLC) to include wedding websites, which she says she has dreamed of doing since childhood.2 Smith has religious objections to same-sex marriage and wants to post that message on her website, but doing that would likely violate the Colorado Anti-Discrimination Act. That law prohibits businesses open to the public from discriminating against customers on the basis of legally protected characteristics (in this case, sexual orientation) or communicating that such groups of people are unwelcome.3

Smith says that she has LGBTQ-identifying clients and would “happily” design graphics for their other endeavors, but creating their custom-made wedding websites would imply her approval of their marriage.4 Smith considers her artwork a form of speech, explaining, “It matters not to me how an individual identifies. What’s important to me is what message is I’m being asked to create and design for. And those messages must be consistent with my convictions.”5

Colorado argues that its law looks only at sales, not speech, to prevent marketplace discrimination, consistent with a longstanding legal tradition of ensuring public accommodations for all groups of people.6 Colorado argues that many businesses could claim their work is creative, and thus “speech,” thereby excusing discriminatory treatment.7 According to the state’s lawyer, “Your product can be a book or a painting, but once you make your product you can’t discriminate against certain customers based on who they are.”8

Lower courts have ruled for Colorado, citing “dignity interests” of members of marginalized groups.9 Many observers point to similarities between Smith’s case and the 2018 case of a baker (represented by Smith’s same lawyers) who claimed free speech and religious exercise should allow him to avoid serving same-sex couples.10 Then, the Supreme Court did not address freedom of speech and reaffirmed a precedent that prevents business owners from denying services due to religious objections.11 In 2021, the Court chose not to hear a similar objection from a florist who declined service for a same-sex wedding.12

The lengthy hearing considered whether Colorado’s law compels an artist to speak or stay silent, in violation of Free Speech rights.13 To address that question, the justices posited numerous hypothetical situations—a common tactic used to make a point or consider implications the specific case might have for other laws.14 Justice Amy Coney Barrett asked if Smith would design a website for a heterosexual couple marrying after divorcing previous spouses.15 In Justice Barrett’s words, “It’s about the message and not about the sexuality of the couple that asked her to express it.”16

Justice Ketanji Brown Jackson offered a hypothetical asking if a mall photographer who wanted to take “nostalgia photographs” of children with Santa evoking the 1950s could enact a policy “that only white children can be photographed with Santa.”17 Smith’s lawyer indicated that it would depend if the objection related to the speech or to the person’s demographics, noting, “When there is an overlap between message and status, message does win.”18 The lawyer also said, “There are difficult lines to draw, and that may be an edge case.”19 When Justice Samuel Alito expanded on the hypothetical, asking if a Black Santa would have to take a photo with a child in a Ku Klux Klan outfit, Colorado’s lawyer said no, since the clothing is not a protected characteristic.20 When Justice Elena Kagan pointed out that in this case, the child’s race would not matter, Justice Alito joked about Black children in KKK outfits (this and other comments have drawn public backlash).21

Justice Sonia Sotomayor argued that the message was the couple’s “story,” but Justice Neil Gorsuch likened it to a freelance writer who declines to work for clients of a different faith.22 Justice Kagan noted that denying a same-sex couple a standard website would be different than refusing to create one saying “God blesses this union,” and Colorado’s lawyer agreed that such “direct speech” is “trickier.”23

The hearing also considered how sweeping an exemption would be. Justice Clarence Thomas observed, “This is not a hotel. This is not a restaurant. This is not a riverboat or a train.”24 Considering whether caterers or chair vendors could claim a speech exemption, Smith’s lawyer argued that “art is different.”25 Justice Sotomayor wondered who else could be denied service, asking, “How about people who don’t believe in interracial marriage? Or about people who don’t believe that disabled people should get married? Where’s the line?”26 Smith’s lawyer called the scenario “highly unlikely” and said, “The line is that no one on any side of any debate has to be compelled to express a message that violates their core convictions.”27

Regarding broader implications, Justice Sotomayor said, “This would be the first time in the Court’s history that it would say that a commercial business, open to the public, serving the public, that it could refuse to serve a customer based on race, sex, religion, or sexual orientation.”28 The lawyer for President Joe Biden’s administration warned that a ruling for Smith could allow a private school to exclude children on the basis of race by saying their teaching message changes when delivered “to students of a different race.”29 By contrast, Chief Justice John Roberts noted that the Supreme Court has never approved efforts to compel speech that is contrary to the speaker’s belief.30

What May Happen Next?

Many Supreme Court observers anticipate a ruling in favor of Smith.31 According to Notre Dame Law School professor Rick Garnett, justices spent the hearing asking about lines and limits when public accommodations laws tangle with First Amendment rights.32 The Court will provide its answer by July 2023.33