Although Justice Brett Kavanaugh’s appointment was ultimately successful, the question remains of whether or not it will be an instance of winning the battle but losing the war with regard to the 2018 midterm elections.

Some commentators have suggested that had Justice Kavanaugh’s confirmation failed, it might have sparked a backlash among voters in both parties who did not see the accusations against him as credible or did not believe the handling of those allegations was fair. Some commentators have also argued that despite Justice Kavanaugh’s successful confirmation, such a backlash could still be in play and could compromise Democrats’ gains in the midterms.

On the other hand, some observers have suggested that Democrats’ anger over Justice Kavanaugh’s confirmation could be the very thing that galvanizes voters to choose Democratic candidates and leads to an even larger “Blue Wave.”

Recent polls have shown an overall decline in the margin for Democrats, coinciding almost exactly with the start of the Kavanaugh hearings. In terms of the likelihood of retaking the two chambers of Congress, Democrats have seen an overall decline of 2-3 percent for the House of Representatives and 13-14 percent for the Senate. However, according to FiveThirtyEight.com, Democrats still maintain a 77.7 percent chance of retaking the House. The party’s chance of retaking the Senate, which most observers believed to be a long shot to begin with, is 18.5 percent. 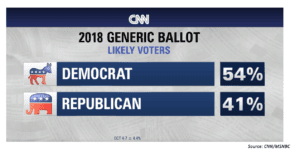 However, a CNN poll conducted after the hearings and completed immediately following Justice Kavanaugh’s confirmation showed Democrats with a 13 percent lead over Republicans among likely voters on a generic ballot.

« Hacking and the Midterms
Back to all Posts
What’s at Stake in the Senate Races? »