The Death Penalty: A Just Punishment? 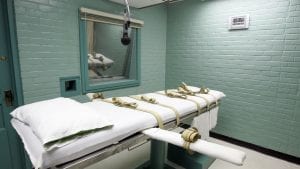 On November 15, 2019, the Texas Court of Criminal Appeals suspended the execution of Rodney Reed and sent his case back to trial, due to new witness testimony that pointed to his innocence and raised concerns about how evidence was handled during the initial trial.1 Since 1977, at least 166 inmates have been released from death row after new evidence came forward or problems were found in the trial procedures.2

Currently, 29 states have death penalty laws, and the federal government recently announced that it would resume executions after a 16-year hiatus. Attorney General William Barr has scheduled five death sentences to be carried out by the end of the year, all in cases involving horrifying murder (and, in some cases, sexual assault as well). Seven states have carried out 20 executions this year,3 the lowest number since 1976, when the Supreme Court found in Gregg v. Georgia that the death penalty does not constitute cruel and unusual punishment.4 Among the factors hindering the pace of federal executions are the difficulty of obtaining the drugs necessary for lethal injection, as well as declining support for the death penalty among the public,5 possibly due to lower rates of violent crime and the recent exoneration of some death row inmates.6

Although capital punishment has been a controversial issue for decades, researchers from the Death Penalty Information Center, a nonprofit that tracks death penalty statistics, noted that “[t]his year has had an extraordinarily high percentage of cases in which there is very serious evidence that people who did not commit the killing are being subjected to death warrants.”8 As such, policymakers are considering and reconsidering whether or not the death penalty is an appropriate way to deliver justice.

Both supporters and opponents of the death penalty are vehemently opposed to any innocent person being put to death. But supporters insist that some crimes are so terrible that death is the only suitable punishment. They also argue that the possibility of a death sentence helps prevent crime from happening in the first place.9 In response to Attorney General Barr’s decision to schedule executions for five federal prisoners, victims’ advocates pointed out that some families find it extremely painful to wait years or decades for an execution that they see as closure and justice for their loved one(s).10 For his part, President Donald Trump supports the death penalty and has called for using capital punishment for mass shooters and drug traffickers.11

Opponents of the death penalty point to inmates like Reed, who was convicted and sentenced to death even though his blood did not match the blood found under the victim’s fingernails and observers have contested the legitimacy of the central evidence in his case.12 Critics argue that the justice system can be flawed, and that there is always a risk that an innocent person could be executed. Opponents also note that even when guilt is certain—as it was in the case of Daniel Lewis Lee, who was convicted of murdering a couple and their child—judgments of who receives the death penalty can be arbitrary and unfair. For example, Lee’s co-conspirator, Chevie Kehoe, received a life sentence even though most accounts point to Kehoe as instigating the violence.13

For further reading on the death penalty, please see Close Up in Class’ Controversial Issue in the News on the subject.

One thought on “The Death Penalty: A Just Punishment?”

« Political Ads on Social Media
Back to all Posts
U.S.-Iranian Relations Following the Death of Qasem Soleimani »