Summer Round-Up #2: Campaigns, Conventions, and the Race to Election Day 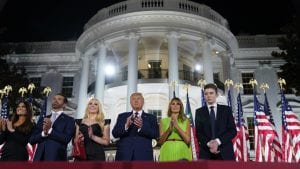 Over the course of the summer, the 2020 election has taken shape. Most primaries for congressional office have concluded, and the parties and presidential candidates were able to showcase their respective visions during their conventions. In this second summer round-up, we take a look at the state of the 2020 election. Our first summer round-up explored the ongoing impact of the coronavirus and the responses to the pandemic. Our third and final summer round-up will discuss ongoing protests, the Black Lives Matter movement, and the changing politics of race and equity since the murder of George Floyd.

All of the seats in the House of Representatives are up for election this year, as are a third of the seats in the Senate. The presidential election inevitably receives the most attention, but control of Congress plays a significant role in shaping U.S. politics as well. At the moment, the Republican Party controls the Senate1 while the Democratic Party controls the House of Representatives.2 It is technically possible for both chambers to change hands, although the latest polls and expert observers predict that Republicans are unlikely to win enough seats to take control of the House.3 The Senate is more competitive. Currently, Republicans hold 53 seats to Democrats’ 47 (including two independents who caucus with the Democratic Party).4 Some election observers predict that Democrats will win enough seats to secure a majority in the Senate,5 while others believe the races remain too close to call.6

One of the key dynamics in the congressional primaries has been the contest for the future of the Democratic Party. Centrist Democrats mounted unsuccessful challenges to young, progressive women of color, including Reps. Rashida Tlaib (D-Mich.), Alexandria Ocasio-Cortez (D-N.Y.), Ilhan Omar (D-Minn.), and Pramila Jayapal (D-Wash.).7 Meanwhile, several progressive challengers, most notably Jamal Bowman of New York8 and Cori Bush of Missouri,9 were able to knock off centrist Democratic incumbents. The presidential primary contests between Sen. Bernie Sanders (I-Vt.) and former Secretary of State Hillary Clinton in 2016 and between Sanders and former Vice President Joe Biden in 2020 also highlighted philosophical differences and tensions within the party.10 This fight will likely continue after Election Day, no matter the outcome.

Party Conventions and Visions for the Future

Both parties have now completed their quadrennial conventions to cement their priorities and nominate their presidential candidates.

WATCH: PBS NewsHour’s 17-minute video with highlights from both conventions

The Democratic National Convention focused on two major themes: party unity and defeating President Donald Trump.11 Speakers largely argued that President Trump is a threat to democracy, as well as a threat to people’s lives, pointing to his administration’s handling of the coronavirus.12

Meanwhile, President Trump and Republican speakers argued that Biden and the Democratic Party represent a radical shift towards socialism and communism.13 In an unusual move, the Republican Party decided not to draft a new platform for 2020, and instead ratified its 2016 platform once again and offered a strong endorsement of President Trump as the voice of the party.14

Final Days of the Election

There are a little over two months left until Election Day. The economy and COVID-19, two of the issues on the top of most voters’ minds, are in constant flux. The stock market is experiencing significant gains, especially in the technology sector,15 but the unemployment rate remains high and seems to be growing.16 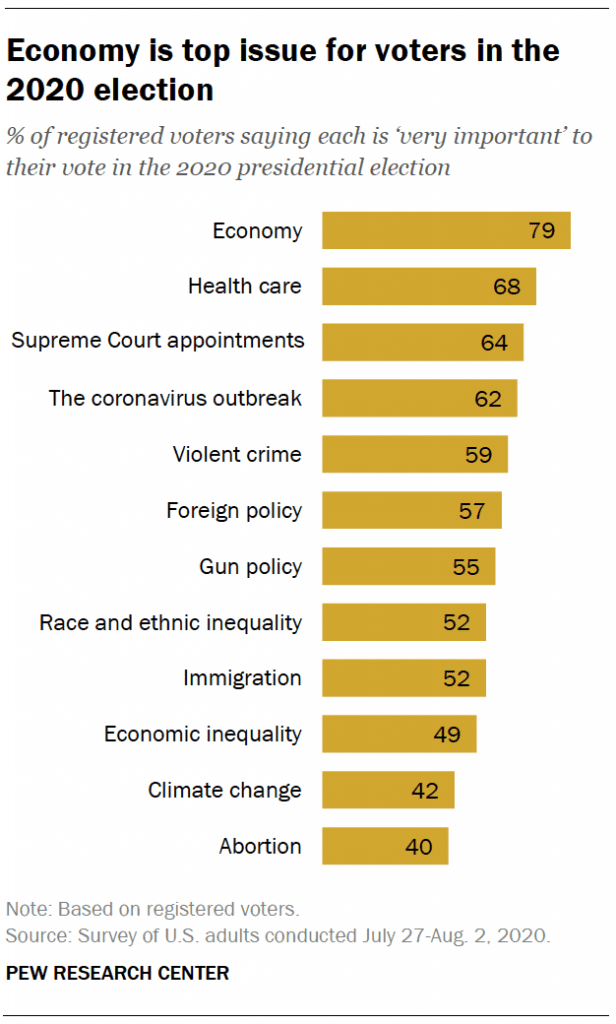 While many big issues clearly weigh on the minds of voters, the presidential campaign has largely focused on character and vision. Looking ahead, the debates and the candidates’ closing arguments will add further definition to the differences between the two men. However, many voters may begin voting by mail before the election cycle reaches that final push.