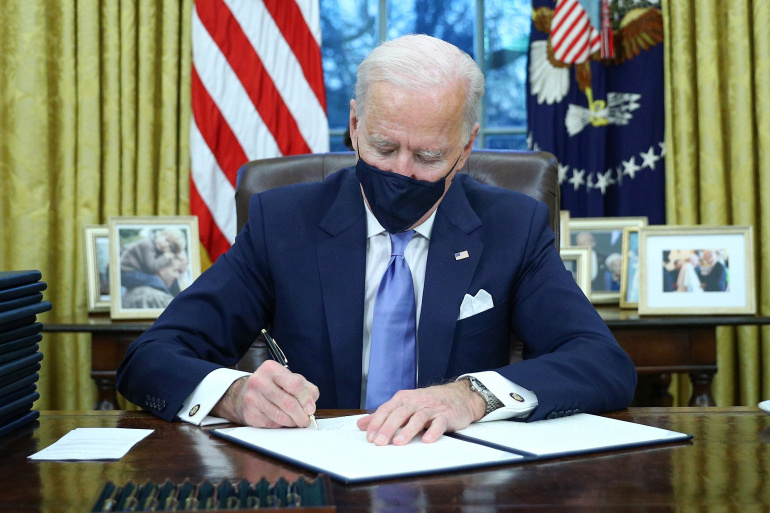 During his inaugural address, President Joe Biden laid out a number of policy priorities. The clearest theme of his speech was a call for unity and the need to address political divisions in the United States, which came to a head with the attack on the Capitol on January 6, 2021.1 However, President Biden also addressed several other priorities of his new administration, including the COVID-19 pandemic, the distribution of vaccines, climate change, systemic racism, and white supremacist terrorism.2

Ever since President Franklin Delano Roosevelt assumed the presidency and issued an immediate blitz of new policies and legislation to address the Great Depression, the first 100 days of any president’s term have taken on a special significance.3 President Biden, facing an unprecedented crisis of his own, is subject to similar expectations. He can implement some desired policy changes with the stroke of a pen through executive orders, but other actions will require the cooperation of Congress. Democrats have a slim majority in the House of Representatives, and they technically control the Senate (which is divided 50-50) through Vice President Kamala Harris’ power to cast tie-breaking votes. Still, the success of President Biden’s more ambitious legislative goals is by no means certain.

During their terms, Presidents Donald Trump and Barack Obama frequently issued executive orders to accomplish their policy goals, in part due to partisan divides with Congress, or within Congress, that prevented legislation from passing.4 Executive orders are directives that are signed and issued by the president, unilaterally enabling him to take action on policies which fall under presidential authority, particularly law enforcement and federal agencies.5 Unlike legislation, however, executive orders are in place only as long as the sitting president permits. President Obama famously used an executive order to create Deferred Action for Childhood Arrivals (DACA) to protect certain undocumented immigrants from deportation.6 President Trump also used an executive order to institute a travel ban on immigrants from several countries, many of them Muslim-majority. This order was among the first that President Biden rescinded following his inauguration.7

Beyond ending the travel ban, President Biden has already issued a number of executive orders targeting a wide range of issues. Included among them is a federal mask mandate that requires anyone on federal property, as well as anyone using mass transit such as city buses, subways, trains, and airplanes, to wear a mask.8 President Biden has also continued a freeze on evictions and on student loan repayments in an effort to provide economic relief to people impacted by COVID-19.9 Other immediate executive orders included the United States’ rejoining of the Paris Agreement and the ending of the withdrawal process from the World Health Organization.10 11

The political divide in Congress presents a series of challenges for President Biden’s 100-day agenda. One issue of immediate concern is confirming the president’s chosen cabinet officials—the heads of the departments and agencies who implement many of the president’s directives and policies. Normally, the Senate would have already confirmed several nominees, for positions such as secretary of state. However, after the 2020 election, the Republican-led Senate was unusually slow-moving with regard to President-elect Biden’s cabinet; as a result, confirmations began in the days before the inauguration.12 With Democrats now in charge of the Senate, most of these confirmations are all but guaranteed, but any delay has the potential to impact President Biden’s agenda.

A much more difficult legislative goal is passing a $1.9 trillion COVID-19 relief package. Included in this proposal are an additional $1,400 stimulus payment for most American adults, a $400 per week bonus to unemployment insurance payments, and an expanded COVID-19 testing and vaccination plan that aims to administer 100 million doses of vaccine by May 1 and reopen schools.13 There may be a way to pass many of these measures through a simple majority of 51 votes in the Senate. However, in order for a bill to pass without question and to remain fully intact, it would require 60 votes in the Senate (including the support of at least ten Republicans).14 Senator Joe Manchin, D-W.V., has already announced his opposition to certain elements of the bill.15 And without Senator Manchin’s vote, there is no guaranteed tie for Vice President Harris to break.

1. Which of President Biden’s policy priorities do you agree with? Which do you disagree with? Are there any that you do not believe should be an immediate priority?
2. What is the top issue that you want the Biden administration to address (even if it doesn’t appear on the lists above)? Why do you think that issue should be a priority?
3. Do you think it is important for there to be bipartisan support for President Biden’s policy goals? Or should the Democrat-controlled Congress prioritize passing bills even without Republican support?
4. Executive orders are a powerful tool at the president’s disposal. Do you believe there should be greater restrictions on executive orders, such as making them temporary without congressional approval? Or do you think executive orders are an important tool that presidents should be able to use unilaterally?

« Fallout and Consequences, Part Two: Free Speech and Censorship
Back to all Posts
The Inaugural COVID-19 Memorial »