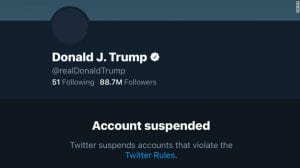 The fallout continues to mount from the January 6 attack on the Capitol. In previous blog posts, we offered a collection of resources and articles and explored the question of accountability for elected officials. In this post, we examine a thorny issue that is also emerging as institutions respond to riots: the power of private enterprise to limit individuals’ rights.

Facebook and Twitter both shut down President Donald Trump’s accounts. Facebook says the ban is indefinite,1 while Twitter is calling its ban permanent.2 Amazon’s web services removed Parler, a conservative social media network, from its servers, effectively shutting down the site.3 Apple and Google have both removed Parler from their app stores.4 Twitter has also removed at least 70,000 accounts that promoted the QAnon conspiracy theory.5

The tech companies that took these steps cite the role that social media played in spreading misinformation6 and hate.7 They also point to the ways in which people used social media to call for the gathering in Washington, D.C., to identify targets of their rage, and to coordinate and organize the attack on the Capitol.8

While some people have cheered these moves on the part of tech firms,9 including most Americans,10 many commentators are raising questions and concerns about the power of companies to infringe on individual rights. “We understand the desire to permanently suspend [President Trump] now,” said Kate Ruane of the American Civil Liberties Union. “But it should concern everyone when companies like Facebook and Twitter wield the unchecked power to remove people from platforms that have become indispensable for the speech of billions.”11

Conservatives have also argued that they are being unjustly targeted by big tech firms. “Amazon, Google, and Apple’s decisions to block the download or use of Parler by their consumers is dangerous,” said Representative Andy Barr, R-Ky. “This blatant monopolistic behavior is designed to shut down debate and silence conservatives.”12 John Matze, CEO of Parler, further stated, “We WON’T cave to politically motivated companies and those authoritarians who hate free speech!”13

Danny Burgess, a Republican state legislator in Florida, argues that companies should be punished for what he views as selective censorship. “As publishers of third-party content, they should not be allowed to discriminate based on content and ban individuals just because they do not agree with their viewpoint,” he said. “These tech giants are monopolies that I think are very clearly coordinating efforts in a lot of ways on certain fronts and doing some selective censorship.”14

Some liberals, however, argue that conservatives are being hypocrites. They argue that Republican lawmakers have been more than happy to allow private businesses to discriminate against people for religious reasons. “The Trump administration didn’t hesitate to side with a Colorado baker who nearly a decade ago insisted that his religious beliefs allowed him to refuse service to a same-sex couple seeking a wedding cake,”15 wrote David Lazarus, a business columnist at the Los Angeles Times. However, concerns about the power of big tech have emerged on both the right and the left.16

There is a coalition of progressive and conservative legislators who are expressing interest in regulating large tech firms differently. One idea is to reform or repeal Section 230, the law that gives internet platforms immunity from being sued because of the content they carry.17 President Trump and many conservatives sought to repeal Section 230 at the end of 2020, but their attempts did not succeed. Changing Section 230 would make social media platforms more accountable for the content they carry, and it would heighten the responsibility of companies to moderate their platforms.

Senator Richard Blumenthal, D-Conn., supports reforming Section 230. After the attack on the Capitol, he highlighted “the need for Congress to reform Big Tech’s privileges and obligations. This begins with reforming Section 230, preventing infringements on fundamental rights, stopping the destructive use of Americans’ private data, and other clear harms.”18

It is likely that lawmakers will introduce legislation dealing with the powers and responsibilities of tech companies, particularly social media platforms, in this new Congress.

« Fallout and Consequences, Part One: Who is Accountable?
Back to all Posts
President Biden’s Policy Priorities: The First 100 Days »