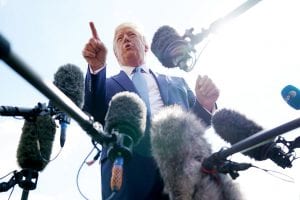 In late September 2019, it was revealed that an officer at the Central Intelligence Agency filed an official complaint with the intelligence community’s inspector general, alleging that President Trump had engaged in an inappropriate phone call with Ukrainian President Zelensky on July 25. The whistleblower alleged that President Trump threatened to withhold approximately $400 million in military aid to Ukraine unless President Zelensky agreed to launch an investigation into the business activities of Hunter Biden. (Hunter Biden—the son of former Vice President Joe Biden, a potential rival for President Trump in the 2020 election—used to work for a Ukrainian gas company.)1

Shortly after this information became public and the White House released an edited summary of the phone call, Speaker of the House Nancy Pelosi announced that the House of Representatives would begin a formal impeachment inquiry, led by House Intelligence Committee Chairman Adam Schiff.2

READ: The Close Up in Class Primer on Impeachment

Impeachment is the adoption of formal charges against the president or another civil officer in the federal government. The impeachment process begins in the House. The House is responsible for carrying out an investigation, or impeachment inquiry, into potential wrongdoing by an official. After the investigation, if a simple majority of the House votes in favor of formal articles of impeachment, the official is impeached. Impeachment does not mean an official will be removed from office.

Next, the process moves to the Senate. The Senate conducts a trial for the impeached official, and the chief justice of the Supreme Court presides. The Constitution requires a two-thirds vote of the senators present in order to convict the impeached official. The penalty for conviction is removal from office. In some cases, the Senate has also disqualified an official from holding public office again in the future.

Only two presidents—Andrew Johnson and Bill Clinton—have been impeached, but both were acquitted by the Senate. To date, no president has been removed from office by the Senate. (The House launched an impeachment inquiry into the actions of President Richard Nixon, but he resigned before the full chamber voted on articles of impeachment.)

Impeachment is a Real Possibility; Removal is Much Less Likely

With at least 226 members of the House supporting the impeachment inquiry, it is a very real possibility that the House could impeach President Trump.3 And as more information has come to light, including a second whistleblower,4 allegations that President Trump asked other countries for investigations,5 and the arrest of two associates of Trump attorney Rudy Giuliani,6 public support for impeachment has grown.7 On October 8, Fox News released a poll indicating that 51 percent of respondents not only want President Trump to be impeached but removed from office as well.8

However, the path to removing President Trump from office contains several significant hurdles. Not only would a vote to convict President Trump, if he is impeached, set a striking precedent (as the first removal of a president in U.S. history), the fact is that the votes simply may not be there.

Currently, the Senate is made up of 53 Republicans, 45 Democrats, and two independents who caucus with Democrats. Even if all 47 Democrats and independents voted to convict in an impeachment trial, they would need the votes of 20 Republicans as well in order to remove the president from office. This would be difficult in normal circumstances; it is particularly unlikely with a national election approaching in 2020.

President Trump remains popular among Republican voters, with 87 percent voicing their approval to Gallup in mid-September. Among independents, the president’s job approval rating is 36 percent.9 For the 23 Senate Republicans up for reelection in 2020, as well as some Democrats in heavily Republican states, voting to remove the president from office could inspire their constituents to vote them out. For many senators, it may not be worth the risk, especially since voters will have the chance in November 2020 to vote on President Trump’s reelection themselves.