Election 2020: Guides for Watching and Discussing the Debates 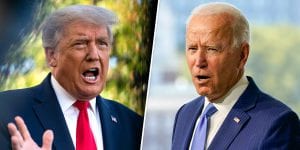 There are three presidential debates scheduled for September 29, October 15, and October 22, as well as a vice presidential debate taking place on October 7. For many voters, the debates are the best chance to see the differences between the candidates as they decide how to cast their vote in November. Campaigns put a lot of effort into the debates; getting a candidate ready for these events often requires weeks of preparation.

Political debates are typically a mix of legitimate policy arguments and attempts to score points with voters through soundbites and “zingers” that can be used for campaign ads and media promotions. What this usually means for the candidates is that the style of their responses and rebuttals is just as important as the substance of what they are saying.

The Impact of Debates

Presidential debates, as we think of them today—formally agreed to by each candidate and televised for the whole country to see—began in 1960 with the debate between Richard Nixon and John F. Kennedy. This event is often cited as one of the most significant debates in history, not just because it was the first but because of its perceived impact on the election.1 Prior to the debate, Nixon was leading in the polls and was regarded as the favorite, having been vice president for nearly eight years.2 However, on television, Nixon appeared uncomfortable, haggard, and awkward; Kennedy, on the other hand, was able to present himself as calm, charismatic, and confident. Although Nixon’s performance improved in the subsequent debates, Kennedy’s polling improved significantly after the first debate.3

Despite the legendary status of the first Nixon-Kennedy debate, it is difficult to say how much the debates themselves contributed to Kennedy’s ultimate victory in the 1960 election. Televised presidential and vice presidential debates were not a matter of routine until 1976, but their impacts on elections remain a source of discussion. Anticipation for the debates is often drummed up by the media and the organizations that host them, but political scientists generally agree that the impact of debates is arguable at best.4

Still, some political observers argue that although “winning” a debate may not be that important, it is very important that a candidate not be perceived as the “loser.” Between debates, media figures will often speculate, comment, and fixate on mistakes and questionable moments in debates. If the debates themselves do not change voters’ minds, the media narratives generated by the debates still can.5

Setting the Stage: Trump vs. Biden

Political observers widely agree that now-President Donald Trump “lost” all three debates with Hillary Clinton in 2016, yet he was victorious in the election.6 However, in 2016, President Trump had yet to hold any political office; therefore, he had no record to put forward or to challenge. This election cycle is different for many reasons, not the least of which is that President Trump now has a term as president under his belt, carrying all the perceived successes and failures that go with it.

Joe Biden has not held public office since January 2017, but up until that point, he had served in the federal government at different levels continuously since 1973. He is also seen as a standard-bearer for the Obama administration and can therefore expect to answer questions not only about his own policies and record but about those of President Barack Obama as well. The latest polling indicates that Biden has a six- or seven-point lead over President Trump nationally, but with only weeks to go until Election Day, the debates could affect that lead … or not.7

Teacher Note: These discussion questions are intended to be used after students view any of the 2020 debates. Below, you can also find student worksheets/guides to use before a debate, during a debate, and after a debate.

These resources will help you work with your students to deconstruct the candidates’ positions and make informed decisions about which of the candidates’ policies they favor. It is recommended (but not required) that you use all three of the guides in sequence to support students before, during, and after each debate.

The Pre-Debate Guide asks students to describe their expectations for the debate, including the issues they want to hear about and their anticipations for each candidate’s performance. The guide also contains a number of links to previous debates, as well as reflection questions for those clips to help familiarize students with the typical style of presidential debates.

The Debate Watch Guide asks students to respond to questions as they view the debate live or in class. This guide helps students follow along and asks them to comment on their impressions and takeaways in the moment. In addition to helping students make sense of the debate, this guide can be a helpful reference for students for any in-class discussion about the debates.

The Debate Reflection Guide asks students to consider the debate and their impressions of each candidate in greater depth. Students are tasked with comparing their expectations of the debate with what actually took place, commenting on the positions they favored, and explaining the impressions of each candidate that they had at the conclusion. This guide can also be a helpful resource for students if you want to hold a discussion of the debate in class.

One thought on “Election 2020: Guides for Watching and Discussing the Debates”

« Summer Round-Up #3: Protests, Police Reform, and Civil Unrest
Back to all Posts
Political Violence and the 2020 Election »