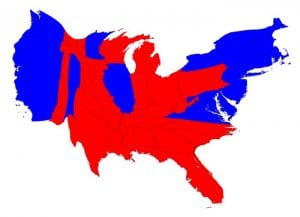 What is the Electoral College?

In 2016, more than 138 million people voted in the general election, but only 538 of them directly voted for president and vice president.1 The reason that both of these statements can be true is the existence of the Electoral College. The Constitution says that rather than voting directly for the president and vice president, citizens vote for a panel of “electors” associated with each candidate in each state. The Electoral College is the name given to this group of 538 individuals spread out across the 50 states.

Each state receives a number of electors that is equal to the state’s total number of representatives and senators in Congress, with the minimum being three (in Alaska and North Dakota, for example). More populous states have more electors, such as Texas (38) and California (55). There are 538 electoral votes in total, representing all 50 states and Washington, D.C. In order to win the presidential election, a candidate must garner a majority of the electoral votes (at least 270). Electors usually follow the outcome of the popular vote in their state, although “faithless electors” do emerge occasionally since there is no federal law mandating that electors obey the statewide popular vote. At present, 29 states and Washington, D.C., have laws that require electors to vote in accordance with the popular vote in their state or district.2

You Can Win Even When You “Lose”

However, supporters of the Electoral College argue that the system still serves a valuable purpose: to make sure that small states matter. They note that without the Electoral College, presidential candidates would focus only on winning the vote in high-population states, such as California, New York, and Texas.5 There are also critics of the Electoral College who argue that abolishing the system is not only unnecessary, but would require an amendment to the Constitution—an amendment that would be unlikely to pass due to a lack of support from smaller states. These critics have put forward a number of potential reforms that would require changes to state laws, rather than constitutional amendments. The two most commonly proposed reforms are proportional electors and the National Popular Vote Interstate Compact (NPVIC).6

Currently, most states award electors on the basis of a winner-take-all model, in which the candidate who receives the most votes statewide receives all of the available electoral votes. However, Maine (four electors) and Nebraska (five electors) use a proportional system, in which there are two at-large electors who vote for the winner of the statewide popular vote, as well as district electors (two in Maine, three in Nebraska) who vote for the winner of the popular vote in each congressional district. Therefore, the presidential candidates compete in each district. For example, if Candidate A receives 60 percent of the popular vote in Nebraska but only had the most votes in two of its three districts, Candidate A receives four electoral votes from Nebraska while Candidate B still receives one. Proponents of this reform argue that it preserves the spirit of the Electoral College by keeping smaller states relevant, but it better represents the will of the different populations in each state.7

Alternatively, some states have agreed to take part in the NPVIC. Rather than binding electors to the winner of the statewide popular vote, the NPVIC circumvents the Electoral College by binding electors to the winner of the nationwide popular vote, regardless of whether or not the people in their state voted for that candidate. Since the NPVIC was established in 2006, 15 states and Washington, D.C., have signed on, although the pact has been suspended in Colorado pending review. Another five states are considering signing on to the NPVIC. If Colorado and those five states join the pact, the electoral vote count of NPVIC states would be 260. However, the NPVIC stipulates that the agreement does not go into effect until its members represent at least 270 electoral votes.8

If The Electoral College Fails: The Implications For 2020

One of the most peculiar aspects of the Electoral College is that there is an even number of votes, making a 269-269 tie possible. There are arguments over whether this is a flaw or a feature; regardless, a tie can happen—and did happen in 1800 between Thomas Jefferson and Aaron Burr.9 In the event of a tie, the vote for president goes to the House of Representatives and the vote for vice president goes to the Senate. In the House, each state is given one vote; in the Senate, each member is given one vote. The votes are carried out by the newly elected Congress in January. If Democrats take control of the Senate and/or expand their majority in the House, they could vote for former Vice President Joe Biden and Senator Kamala Harris, D-Calif. However, because the House vote is one vote per state rather than one vote per member, President Donald Trump could still win reelection since there are more states with a Republican-majority delegation. This system also leads to strange possibilities such as a Biden/Pence or Trump/Harris White House.10

In reality, a tie is extraordinarily unlikely. What is more likely is a situation in which neither candidate receives 270 votes, also known as a “contingent” election. Normally, this would be virtually impossible, since with only two major candidates to choose from, one candidate’s loss is the other’s gain. However, states are required to officially certify their election results by the end of December. With concerns being raised over mail-in voting systems, President Trump’s refusal to commit to accepting the results should he lose, and various court procedures that could hold up election results, the possibility that one or more states could fail to certify their election results has become more likely. In the event that neither Biden nor President Trump has the required 270 electoral votes, the election would be sent to Congress just as it would be in the event of a tie. Congress has had to decide the election outcome on only two occasions, in 1800 and in 1824, so this situation is unlikely but not impossible.11

For more of our election coverage, see our recent posts on Political Violence and the 2020 Election, The Supreme Court Fight and The Election, and Election 2020: Guides for Discussing the Debates.

« Political Violence and the 2020 Election
Back to all Posts
A Bumpy Transition: Where Do We Go From Here? »