The Supreme Court Fight and the Election 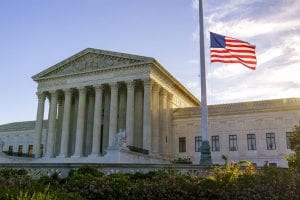 Supreme Court Justice Ruth Bader Ginsburg passed away on September 18. Nominated to the Court in 1993 by then-President Bill Clinton, she served on the bench for the next 27 years. Justice Ginsburg was a hero to liberals and progressives, due to both the work that she did before serving on the Court and the strong opinions she wrote as a justice that promoted civil rights for women and other marginalized groups.1 The timing of Justice Ginsburg’s death, just six weeks before the presidential election, has generated political chaos as Democrats and Republicans fight over her replacement.2

Interested in discussing the Supreme Court vacancy with your class? Check out our student and teacher guide for making sense of the Court fight through the lens of the election.

On September 26, President Donald Trump nominated Judge Amy Coney Barrett to serve as Justice Ginsburg’s replacement. Judge Barrett currently serves as a federal appellate judge on the U.S. Court of Appeals for the Seventh Circuit. According to reporting from NPR, Judge Barrett is seen as “the dream candidate for conservative Republicans and the nightmare candidate for Democrats.”3 This is because of her past opinions and statements on issues such as gay marriage, abortion, and the Patient Protection and Affordable Care Act (ACA) that strongly align with conservative values and priorities. Judge Barrett, 48, is also relatively young; because she would be serving a lifetime appointment, she could pull the Supreme Court in a conservative direction for decades to come.4

The Battle for the Court

The present debate centers on whether President Trump should go ahead with nominating a replacement for Justice Ginsburg, or if that seat on the Supreme Court should remain open until after the winner of the upcoming presidential election is inaugurated. Before Justice Ginsburg’s death, the Court was made up of five justices who were generally conservative and four justices who were generally liberal. Liberals are afraid that Judge Barrett, if confirmed, would tilt the balance of the Court to six reliably conservative justices, thus threatening liberal priorities such as abortion rights and the ACA.5

There is no law that prevents President Trump from nominating a justice so close to an election. However, Democrats are accusing Senate Majority Leader Mitch McConnell, R-Ky., and other Senate Republicans of hypocrisy if they vote to confirm President Trump’s nominee. This is because in the aftermath of Justice Antonin Scalia’s death in February 2016, Senate Republicans chose not to consider President Barack Obama’s nomination of Judge Merrick Garland to the Supreme Court. At the time, McConnell wrote in an op-ed that the American people should be able to “weigh in on whom they trust to nominate the next person for a lifetime appointment to the Supreme Court.″6 Senate Minority Leader Chuck Schumer criticized McConnell’s promise to hold a confirmation vote on Judge Barrett’s nomination, stating, “Now these words don’t apply? It doesn’t pass the smell test in any way.”

But according to McConnell, the main difference between the two nomination fights is that in 2016, government power was divided, with Republicans controlling the Senate and a Democrat in the White House. In 2020, both the White House and the Senate are under Republican control. “[In 2016], President Obama was asking Senate Republicans for an unusual favor that had last been granted nearly 130 years prior,” said McConnell, noting that the Senate had not filled a Supreme Court vacancy arising in an election year when there was divided government since 1888. “But voters had explicitly elected our majority to check and balance the end of his presidency. So we stuck with the historical norm.”7

Because there is nothing to stop Senate Republicans from confirming a new justice, Democrats and their supporters are resorting to the application of political pressure to sway individual Senate Republicans away from voting “yes.” Several vulnerable Senate Republicans are up for reelection in November, including Senators Susan Collins, R-Maine, and Cory Gardner, R-Colo.8 However, after Senator Mitt Romney, R-Utah, pledged to vote on President Trump’s nominee, Republicans clinched the 50 votes needed to confirm a new justice this year.9

Democrats may lose the fight over a Supreme Court pick, but many in the party hope to use their anger over the issue to galvanize their base and ensure a large voter turnout in the general election. Some lawmakers have suggested that Democrats should “pack the Court” if they succeed in gaining control of the Senate and the White House. This means that if former Vice President Joe Biden wins the presidency and Democrats win control of the Senate, liberals want Biden to nominate more justices to increase the size of the Court from the traditional nine justices, ensuring that Democrats’ agenda would be safe from conservative lawsuits.10

Democrats have also threatened to do away with the Senate cloture rule, a parliamentary procedure that requires 60 senators to agree to hold a vote, thus removing the threat of a filibuster.11 The cloture rule has already been abandoned for court nominations, but not for legislation. If Democrats take control of both Congress and the White House and end the possibility of a filibuster, they would be able to pass legislation without any Republican votes.12

However, it is not guaranteed that the threat of increased liberal turnout or significant political changes will benefit Democrats’ chances of winning elections or swaying Senate Republicans. The possibility of another conservative justice on the Supreme Court could increase Republican turnout and energize their base voters.13 Furthermore, some conservatives have argued that the Senate should confirm the new justice during the “lame duck” session after the election.14 A lame duck session takes place after the election of new legislators but before those legislators have been seated in Congress. When asked if Republicans would vote for a Trump nominee during a lame duck session, Senator John Cornyn, R-Texas, replied, “You mean while we’re still in our term office, and President Trump is? Of course.”15 If Republicans were to act in a lame duck session, they would have plenty of time to wait out any stalling techniques that Democrats might use before the election.16

At present, there is nothing to stop Republicans from nominating another conservative justice, such as Judge Barrett, to the Supreme Court. But it remains to be seen how their strategy might impact the election and the future of the Senate.

« Election 2020: Guides for Watching and Discussing the Debates
Political Violence and the 2020 Election »

Looking for more information?
E-mail us
© 2020 Close Up Foundation. All Rights Reserved.