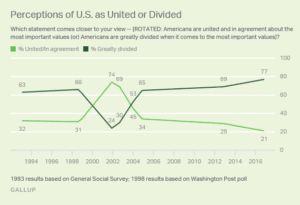 The hate-based mass shooting in Pittsburgh and the attempted assassinations of prominent Democrats and media figures are among the most recent and startling signs that the divides in the country are getting deeper and more dangerous. This post is intended to help teachers and students explore the sharp political divides that exist in the United States. It is also important for teachers to help students discuss the tragedy in Pittsburgh; fellow Teaching for Democracy Alliance members, Facing History and Ourselves and PBS Newshour, shared some resources and questions to help teachers do just that.

Evidence of Anger, Fear, and Polarization 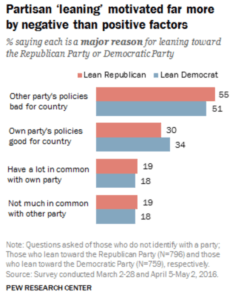 Several polls conducted by Gallup and the Pew Research Center in recent years indicate that political divisions in the country are serious and wide.

The trends in the above poll show that partisanship has been increasing for decades, with the terrorist attacks of September 11, 2001, briefly uniting the country. 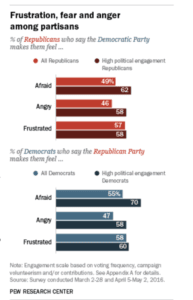 This second poll indicates that Americans’ worries about what the other party will do is a major factor in determining which party they support. In fact, both Democrats and Republicans said they are more opposed to the other party than they are supportive of their own.

This last poll indicates that both Democrats and Republicans hold negative attitudes, including fear, anger, and frustration. More highly engaged Republicans and Democrats felt these emotions even more acutely.

Taken together, these polls tell a story of a divided nation in which those on different sides of the political divide have negative views of each other—views such as fear and anger that can make political discourse difficult, if not impossible.

Political polarization seems to be everywhere. Americans are currently engaged in debates about protests during the national anthem, about the #MeToo and #BlackLivesMatter movements, and even about our choices in entertainment. Two news items from NPR—an article from January that looks at the state of American politics and an article from earlier this month that discusses partisan gaps on important political and policy issues—will help you and your students investigate polarization.

Finally, share this article from The Atlantic about various proposed reforms to lessen or eliminate partisanship and polarization. Then, discuss which of these proposals, if any, students would support.

« Election Integrity or Voter Suppression?
Back to all Posts
Campaign Ads and Campaign Cash »