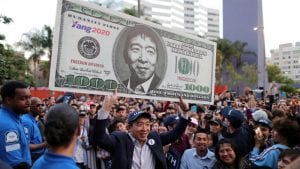 On November 6, 2017, businessman Andrew Yang began a presidential campaign centered on a signature policy, Universal Basic Income (UBI).1 If put in place, this UBI or “Freedom Dividend” would give every adult American $1,000 a month, no questions asked.2 The idea captured some voters’ imaginations; although Yang ultimately suspended his campaign after a poor showing in the Iowa caucuses and the New Hampshire primary, UBI has never been more popular.3

UBI is a form of government assistance wherein every adult citizen is automatically entitled to regular payment from the government. In most proposed UBI systems, this money does not have to be spent on specific goods or services; it can be used by recipients for anything they deem necessary.4 Some UBI systems call for replacing basic income entirely, making full-time employment largely optional. Others favor a more modest approach, which would supplement rather than replace individual income.

How Would Yang’s Model Work?

The current median annual individual income in the United States is approximately $33,000; the poverty line stands at just under $13,000 per year.5 At $12,000 per year, Yang’s UBI would still fall below the poverty line and therefore would not replace the need for employment for most people. However, for an individual living in poverty, an additional $1,000 a month would essentially double their income. Yang also argues that entitling adults to $1,000 per month would mean that unpaid jobs, such as stay-at-home parenting and volunteering, would no longer necessitate the same sacrifice.6 Yang also suggests that UBI could be a means of enabling people to make more time in life for personal development and interests, as they would not have to focus so much on acquiring money.7

According to Yang’s policy briefs, his UBI policy would cost $2.8 trillion per year, which is roughly 70 percent of the federal government’s current annual budget.8 Yang’s policy proposal takes other factors into account, which he claims would bring the net cost down to $320.5 billion per year. His policy would raise additional revenue by imposing a new value-added tax (VAT, a type of tax on products that consumers buy).9 However, economic experts do not agree that the cost of the program could be offset sufficiently.10

Why Is Yang Advocating for UBI?

Yang has tied the need for UBI to the threat of automation in what he calls “The Fourth Industrial Revolution.”11 Unlike previous revolutionary changes owed to technology, Yang suggests that advancements in artificial intelligence will result in jobs being lost at a higher rate than they can be replaced. On his policy site, Yang argues that in the next 12 years, one in three Americans are at risk of not just losing their jobs but having their profession itself cease to exist.12 For example, Yang believes that driverless vehicles will render trucking jobs obsolete and leave truckers with a skill set and job history that is no longer relevant when they need to find new employment. UBI could be a way to offset the harm of job loss and provide individuals with a safety net as they find new jobs or learn new skills.

What Is the Criticism of UBI?

Beyond the high cost of implementing UBI, criticisms tend to center on the implications that such a system would have on the economy. Some have suggested that UBI would disincentivize hard work and undermine the American work ethic.13 Others point to studies which show that people receiving unemployment benefits devote more time to leisure than job-hunting.14 Participants in similar smaller-scale programs were shown to be less productive and less motivated to work.15 Finally, some economists argue that prices on everything from food to rent would increase, reflecting the extra money that people would have. Therefore, little would change other than the imposition of new government spending.16

The Future of Universal Basic Income

UBI is unlikely to come before Congress anytime soon, especially with its best-known advocate no longer in the race for president. However, prior to Yang’s candidacy, a minority of voters supported or had even heard of UBI, whereas recent polling indicates that a slim majority of voters favor the idea.17 UBI is being piloted in several U.S. cities and is far more popular in Europe, with pilot programs already underway in several countries. While this is far from the first time UBI has been promoted, it is not outside the realm of possibility that with changing economic realities, the policy could continue to gain support among policymakers.18