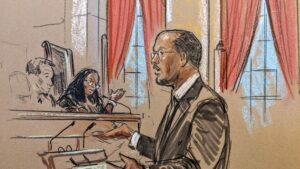 On October 4, the Supreme Court heard oral argument in the case of Merrill v. Milligan. In that case, the Court is considering whether the Voting Rights Act of 1965 should apply to Alabama’s recent congressional redistricting. One section of the Voting Rights Act requires that states provide minority voters with “an equal opportunity to participate in the political process.”1

What Are the Details of the Case?

Alabama has a large Black population but that population does not have a significant impact on the election of Alabama’s members of the House of Representatives.2 Only one of Alabama’s seven districts is set up so that minority voters have the potential to sway the election. According to the National Conference of State Legislatures, Black voters have less opportunity than other Alabamians to elect congressional candidates of their choice.3 As NPR reports, ”Black voters are either concentrated in that district so they are a supermajority there or spread out across the remaining six districts so that their voting power is diluted. It’s a practice known as packing and cracking.”4

A summary of the case’s road to the Supreme Court from Axios states:

What Were Alabama’s Arguments?

The state of Alabama argues that its districts are legal and that they were drawn in a race-neutral manner.6 During oral argument, the attorney for Alabama argued that there are many possible configurations of the congressional districts, and that computer models did not necessarily produce a map that was more favorable to minority voters. They stated that even the “plaintiffs’ [the other side’s] own witnesses testified about millions of possible race-neutral plans that, like Alabama’s plan, have no more than one majority-minority district. Plaintiffs were able to produce comparator plans with more majority-Black districts only by starting with a ‘nonnegotiable’ racial target and backfilling with other redistricting criteria after that target had been hit.”7

What Were the Plaintiffs’ Arguments?

Deuel Ross, senior counsel for the NAACP Legal Defense Fund, argued for the plaintiffs. “There is nothing race-neutral about Alabama’s map,” he said. “The Black Belt is a historic and extremely poor community of substantial significance. Yet Alabama’s map cracks that community and allows [a] white block voting to deny Black voters the opportunity to elect representation responsive to their needs.”8

Ross also argued that the plaintiffs were not asking for guarantees that Black voters would be a majority or the major force in any district. Instead, they were asking for a plan that drew Black voters in districts where they are given “at least a fair chance—not even a guaranteed chance—to elect their candidates of choice in a second district.”9

While the Supreme Court has already heard the case, it is unlikely that its decision will be handed down before June 2023.

« Understanding the Iranian Hijab Protests
Back to all Posts
Does Religious Freedom Guarantee Abortion Access? »