The New Congress and the Government Shutdown 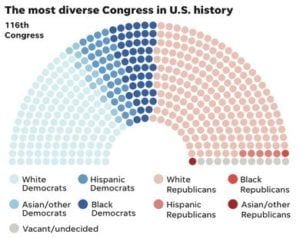 On January 3, the 116th Congress was sworn in as directed by the 20th Amendment to the Constitution. The incoming Congress will be the most diverse in history. Here are some facts about the makeup of the new Congress:

There is one vacancy in the House, as the election in North Carolina’s Ninth District is unresolved. The Republican nominee, Mark Harris, received 905 more counted votes than his opponent, but there is evidence of illegal election activities performed on his behalf. The North Carolina Board of Elections has dissolved without certifying a winner in the race; thus, nobody will be seated from this district for the foreseeable future. There may be a new election, but there will be 434 members of the House for the time being.

What Will be the Impact of Democrats Taking Over the House?

Nancy Pelosi, D-Calif., is the new speaker of the House. The speaker runs the House, controls the agenda, and influences the shape and content of legislation. It is very difficult for a proposal to receive a floor vote without the support of the speaker; at the same time, if the speaker supports a particular piece of legislation, she can easily make sure there is a floor vote.

Democrats will also control House committees, as they will hold committee chairmanships and more seats on each committee than Republicans. Chairpersons control committee agendas and determine which bills go to the entire chamber. With more votes, Democrats will be able to get more bills and amendments passed through committees.

Of course, Republicans still control both the Senate and the White House, and enacting legislation in a divided government is difficult. Each party has its own priorities and it is hard to find compromise in an era of intense partisanship. This will be especially true for the present government shutdown.

What Is a Government Shutdown?

Every year, the new Congress must pass, and the president must sign, the budget for the federal government. The budget consists of 12 appropriations bills that must be passed alone or together in order to fund the government. The fiscal year for the federal government runs from October 1 through September 30; theoretically, the budget should be passed before October 1, but this almost never happens.

If appropriations bills are not passed by October 1, Congress usually sends a continuing resolution (CR) to the president to fund the government at previous levels until a certain date.

Why Is There Currently a Government Shutdown?

The last CR passed by Congress expired on December 21. President Donald Trump has refused to sign any additional CRs or appropriations bills unless they contain $5 billion to construct a wall on the southern border. As Democrats take over the House, they are expected to pass appropriations bills and CRs and send them to the Senate, but the Senate is unlikely to bring them to a vote unless there is an agreement with President Trump. Without funding, federal departments and agencies that get their funding through the budget process do not fully function.

What Does a Government Shutdown Impact?

Activities and services that have been deemed essential will continue, but those who work in those jobs are not paid as they continue to work (traditionally, workers receive back pay when the dispute ends). Approximately 800,000 federal employees will neither report to work nor draw a paycheck (similarly, Congress can pass legislation to pay furloughed workers after the shutdown ends). The longer the shutdown goes, some of these public servants will have trouble paying bills, including mortgages.

Activities that will cease during the shutdown include:

How Will the Shutdown End?

Both chambers of Congress need to pass, and the president must sign, a CR or the rest of the remaining appropriations bills (or a combination of both). This process takes some time, so even if an agreement is negotiated it will take another couple of days to end the shutdown.

In an address to the nation tonight, President Trump will make his case for funding the border wall before ending the government shutdown. Democrats, meanwhile, have made their own plans to address the shutdown during their first days in power.

President Trump is arguing that $5 billion in border security, whether it funds a wall or something like a wall, is essential for protecting the country and ending the flow of illegal immigration into the United States. He insists that he was elected on the promise of building a wall on the southern border, and it is time for Congress to act.

Democrats in Congress argue that $5 billion is too much to spend, that the public does not support building a wall, and that a wall is a stale attempt at security at a time when newer technologies are cheaper and more effective.

Here is a statement by Senate Majority Leader Mitch McConnell, R-Ky. And here is the view of Representative Ruben Gallego, D-Ariz.

« Criminal Justice Reform: The First Step Act
Back to all Posts
10 Things to Know About the Government Shutdown »