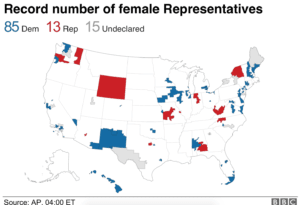 Tuesday’s election strengthened the Republican majority in the Senate, but it is likely that the most significant outcome at the national level is Democrats’ new majority in the House of Representatives. In this post, we will explore some of the trends and data from the midterms as well as some of the implications of divided government and Democrats’ control of the House. In the next post, we will look at some of the ramifications at the state and local levels.

There will be a record number of female representatives in the next Congress.

A diverse group of women won elections across the country. According The Cook Political Report, there will be more than 100 women in the House once all of the election results come in. This article from The Guardian describes many of the new faces in Congress, including two Muslim women and two American Indian women. 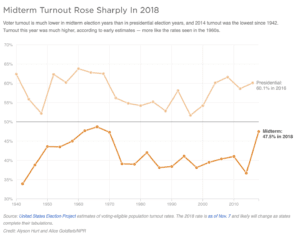 Voter turnout for the midterms set a 50-year high, indicating a high level of energy, engagement, and anxiety. Exit polls and other polling indicate that most voters viewed the election as a referendum on President Donald Trump’s time in office, and Democrats led the national popular vote over Republicans by a margin of seven percent.

Turnout among young voters also hit high levels, and young people largely supported Democrats by a two-to-one margin, according to the Center for Information and Research on Civic Learning and Engagement (CIRCLE). 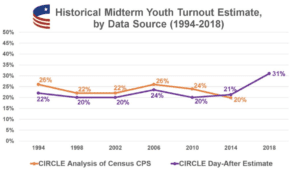 Democrats gain control of the House.

This CBS News article explores the ways that Democrats might try to slow down President Trump’s agenda, especially as it relates to immigration and tax cuts. Various House committees may also begin to use subpoenas to investigate the Trump administration and campaign and any ties to Russia, the president’s finances, and other issues. As far as legislative issues, this New York Times article says that Democrats will seek to strengthen campaign and ethics laws, protect health care, and push for infrastructure spending. This Vox article gives a more detailed account of what the Democrat-controlled House may try to accomplish in relation to health care.

Questions to For Student Discussion

« A Rumble in the House—What Are the Odds of Republicans Maintaining the Majority?
Back to all Posts
Making Sense of Election Results, Part 2 »