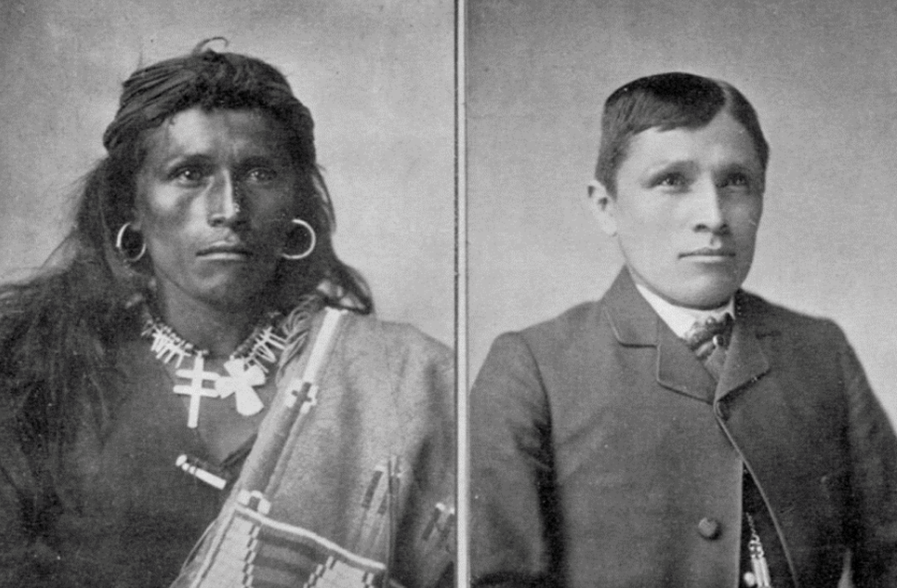 In September 2021, a bipartisan group of senators and representatives reintroduced the Truth and Healing Commission on Indian Boarding School Policies in the United States Act, which would establish a commission to “investigate, document, and acknowledge past injustices of the federal government’s Indian Boarding School Policies.”1 The commission would use its findings to recommend actions to best redress the historical trauma and long-term impacts of those policies.

In the late 1800s, more than 350 Indian boarding schools (also known as residential schools) were established across the United States.2 Native children—some as young as three years old—were forcibly taken from their families and compelled to attend. Families who refused to give up their children were denied food, supplies, and other critical support by the Bureau of Indian Affairs—all things that should have been guaranteed by treaties.3

Once in the schools, Native children were required to assimilate to the ideals and norms of mainstream white society.4 The focus was not so much on education but reeducation. The children were denied traditional meals and clothing, required to cut their hair, and punished for speaking their native languages, thus effectively stripping them of their culture.5

The white Americans who operated the schools viewed Native culture as inferior—something to be “corrected” by being erased. Quite simply, their mission was to “kill the Indian, save the man,” a phrase which is attributed to Lieutenant Colonel Richard Henry Pratt, the founder of the first Indian boarding school.6 These actions, coupled with instances of neglect and abuse, have been condemned as human rights violations and acts of “cultural genocide” that have never been fully acknowledged or healed.7

Substandard medical care left Native children exposed to disease and death; those who died were often buried anonymously in shallow graves, their families denied closure and accountability. Numerous survivors have shared their own stories of psychological, physical, and sexual abuse they faced while at the boarding schools.8 Recently, non-Native Americans have become more aware of the scope of trauma and tragedy with the discovery of hundreds of graves on the grounds of former boarding schools, including more than 170 graves recently discovered in Carson City, Nevada.9 Thousands of graves of Native children were identified at former boarding schools in Canada as well.10 Preston McBride, a researcher at the University of Southern California, estimates that there could be up to 40,000 such graves across the United States.11

The Truth and Healing Commission on Indian Boarding School Policies in the United States Act would build upon investigations announced this summer by Secretary of the Interior Deb Haaland to search for children’s remains at former boarding schools.12 Haaland has her own connection to this issue, as her grandparents were forced to attend boarding schools. As a former U.S. representative herself, Haaland first introduced a version of this bill in the previous Congress.13

Although these boarding schools have not been in operation for decades, their effects linger in Native communities and in the conscious of our country. “The U.S. Indian Boarding School Policies stripped children from their families and their cultures—actions that continue to impact Native American, Alaska Native, and Native Hawaiian communities today,” said Representative Sharice Davids, D-Kan., one of the bill’s cosponsors. “Our country must do better to acknowledge its legacy and understand the full truth of these policies. This commission is a critical step to allow Native families and communities to begin to heal from the intergenerational trauma.”14

One thought on “Indian Boarding Schools: The Truth and Healing Commission”

« Brackeen v. Haaland, Part 2: Challenging the Indian Child Welfare Act
Back to all Posts
The Infrastructure Bill: What It Includes and What Remains To Be Done »