Executive Privilege and the Supreme Court 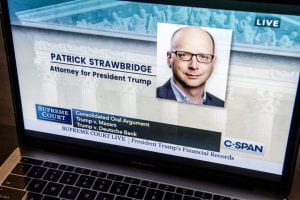 Last week, the Supreme Court heard arguments in two cases involving President Donald Trump’s tax returns and financial records, Trump v. Mazars and Trump v. Deutsche Bank. During the 2016 election, then-candidate Trump broke with tradition and refused to release many of his financial records and tax returns. The president is suing his accountants and banks to prevent them from releasing his personal financial information to Congress. President Trump claims that executive privilege protects him from releasing any of this information to Congress; attorneys for the House of Representatives argue that executive privilege does not apply here.1 So, what is executive privilege and why is it in dispute?

Executive Privilege: Defined as Being Ill-Defined

Executive privilege is commonly defined as “shielding the president from having to disclose some internal executive branch communications.”2 However, as soon as anyone tries to define what communications count as privileged, there is often disagreement, some of which is likely political in nature and depends on the party occupying the executive branch.

The system of checks and balances makes the issue murkier. Since executive privilege is usually cited in disputes between two branches of government, the legislative and executive, the judicial branch tries to avoid weighing in so as not to favor one branch over the other. As a result, most guidance on executive privilege comes not from judicial rulings but from Department of Justice memoranda, which can be interpreted differently and modified with each new administration.3

Historical Use of Executive Privilege

The two most famous Supreme Court cases dealing with executive privilege are United States v. Nixon and Clinton v. Jones. In Nixon, President Richard Nixon claimed that executive privilege protected him from having to release the Watergate tapes to the special prosecutor. In a 8-0 decision, the Supreme Court ruled against the president on the basis that criminal activity was under investigation, which directly spoke to the president’s duties as chief executive.4

In Clinton, executive privilege was invoked to stop President Bill Clinton from having to testify in relation to a sexual harassment accusation brought against him from before he was president. The Court also ruled against Clinton and established that activities prior to assuming the office of president were not protected.5

What Is In Dispute This Time?

If the Supreme Court has already ruled that activity prior to assuming the office of president is not protected, then why is there an unsettled question in these cases? In both United States v. Nixon and Clinton v. Jones, the legislative branch was not directly involved.

President Trump’s attorneys and other legal scholars argue that it is inappropriate for the judicial branch to rule on a dispute between two other co-equal branches of government, and that executive privilege is necessary to prevent Congress from burdening the president with legal battles. They argue that it is unclear why Congress is seeking the president’s financial information; particularly in the absence of a criminal charge, there is no standing to compel the president to release the information. Finally, they argue that the motives of the Democrat-controlled House are political, and that the chamber seeks to compel the president to release his records specifically to hurt his chances of reelection in November.6

The case being made by the House is that executive privilege has already been ruled as not absolute, that it only protects information related to the performance of presidential responsibilities, and that if the Supreme Court were to rule in favor of President Trump, it would unacceptably limit the oversight duties that Congress is supposed to have over the executive branch as part of the system of checks and balances. The House has also argued that the records it is seeking do not belong to the president but to Mazars and Deutsche Bank, which have both agreed to obey the subpoena.7

One thought on “Executive Privilege and the Supreme Court”