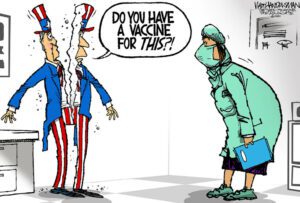 We do not have to look far to find evidence of strong partisan hostility in the United States. People are ending long-term friendships, or even cutting off communication with family, over political differences.1 Partisan animosity—feelings of anger, fear, and distrust toward those with whom we disagree—has been steadily increasing for decades.2

Earlier this month, the Pew Research Center released new survey data that help to give a sense of the problems we face as a democracy. “Perhaps the most striking change is the extent to which partisans view those in the opposing party as immoral,” wrote the report’s authors.3

As the chart below indicates, people believe that members of the opposite party are closed-minded, dishonest, immoral, unintelligent, and lazy. The fact that large majorities of members of both parties view members of the opposite party as closed-minded and dishonest means that we are lacking fertile ground for deliberative democracy and civil discourse.

While schools alone cannot solve these problems, and schools certainly didn’t create these problems, schools remain a setting in which people from different backgrounds come together for significant stretches of time. Schools can make use of this diversity by facilitating dialogue about pressing social and political issues.4

We encourage teachers to design high-quality dialogue and deliberations that call on students to weigh evidence from multiple sources, view issues from multiple perspectives, and work collaboratively to solve problems. This blog and our many resources in the Current Issues Resource Library are designed to help teachers foster this kind of dialogue.

Such dialogue can help students build knowledge and skills, but it is also important for students to reflect on the dispositions that they are developing. There are many dispositions democratic citizens should develop, including:

Fostering these traits in students is not easy. It requires repeated experiences with working together to solve common problems, critical self-reflection, and engaging imaginatively with the perspectives of others through film, literature, and dialogue.

[2] Abramowitz, A. I., & Webster, S. “The Rise of Negative Partisanship and the Nationalization of U.S. Elections in the 21st Century.” Electoral Studies. 41. 12-22. 2016. Deichert, M. Partisan Cultural Stereotypes: The Effect of Everyday Partisan Associations on Social Life in the United States. Doctoral Dissertation, Vanderbilt University. 2019.

[6] Narayan, Uma. “Working Together Across Difference: Some Considerations on Emotions and Political Practice.” Hypatia 3.2. 31-47. 1988.

« Public Parks and Community Green Spaces
Back to all Posts
Summer Roundup: Back to School with the Supreme Court, the Midterms, and the Search of Mar-a-Lago »