The 2018 election is easily going to be the most expensive midterm election in history. There are estimates that campaigns, parties, and interest groups will spend about $5.2 billion by the time it’s all over—about 35 percent more than was spent on the 2014 midterms.

Some of this money is spent on supplies, signs, the hiring of staff, and get-out-the-vote operations, but the vast majority goes toward advertising on television and social media. It is online and on the airwaves where much of the campaign is fought; this is how candidates and outside groups attempt to influence undecided voters and motivate supporters to go to the polls.

Since advertising is the main tool of persuasion used by campaigns, it is important for students to learn to view political ads critically. There are a number of resources that allow students to learn about and research campaign ads.

C-SPAN Classroom has a number of excellent resources, and its lesson plan on What Makes a Good Campaign Ad—Advertisement Analysis is specifically about ads for the 2018 election. The lesson plan includes eight clips of current campaign ads with two professional campaign strategists, Steve McMahon (Democrat) and Todd Harris (Republican), analyzing why the ads are effective or ineffective. The lesson plan is well organized and the short clips are excellent; there’s even a graphic organizer to help students take notes and think about the ads they are watching.

Note: You must either register (for free) for a C-SPAN Classroom account or use the generic login (user name: students, password: C-SPANCLASSROOM).

Getting students to do their own research of campaign ads will help them build their analytical capabilities. One idea is to assign pairs of students to different political races around the country, and have them analyze the candidates’ ads.

The best races for such an assignment are competitive races. The Cook Political Report assesses both House and Senate races and determines how likely each race is to go to one party or the other. Using The Cook Political Report’s House and Senate charts, select races in the “Toss-Up” or “Lean” categories; there should be plenty of ads for students to find, watch, and analyze. Once you assign students their races, make sure they do some background research on the candidates and the district or state before they watch the ads.

To find those ads, Google has a robust library of the political advertising that has appeared on their sites, both video and flat text versions. Students can search for ads using the name of the candidate or the sponsor (such as a specific party or political action committee [PAC]). Make sure that students are viewing ads from the 2018 cycle.

After they view their ads, have students consider the following:

You can have the pairs of students present to the class on the race they are covering, by sharing one of their ads and their analysis.

The other piece of the equation is the money that is spent on these ads (billions of dollars in this cycle alone). Who is contributing money to fund all these commercials? 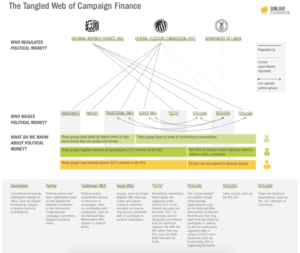 Source: The Tangled Web of Campaign Finance infographic, from The Sunlight Foundation

Students can research who is behind these ads. Google’s Transparency Report allows people to search out who has spent money on political ads, and on which specific races, on their sites.

Opensecrets.org tracks overall contributions to candidates and parties. You can conduct searches by interest group, industry, PAC, or party. Students can use this site to research which industries and interest groups are contributing to campaigns.

Have students consider why various groups are so willing to spend money on races for the House or Senate.

In the end, have students consider the influence that money has over the political system. The Supreme Court has ruled that campaign contributions are the equivalent of speech and therefore are protected by the First Amendment. Do students agree with this assessment?

« Anger, Fear, and Polarization
Back to all Posts
A Rumble in the House—What Are the Odds of Republicans Maintaining the Majority? »