C-SPAN Cameras on the House Floor 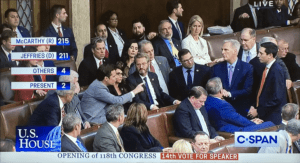 When the 118th Congress convened on January 3, what is usually a quick procedural vote for speaker turned into a contentious five days of voting on the floor of the House of Representatives.1 The frustrations, negotiations, and heated debates were on display on C-SPAN. Since the House could not adopt rules without a speaker—members-elect could not even take their oaths of office—C-SPAN had a period of unprecedented access to roam the chamber, using three cameras to broadcast the proceedings without the usual constraints of House rules.

C-SPAN’s videos went viral online and gave viewers a previously unseen look at what happens on the House floor. Cameras captured raw reactions, candid conversations, and revealing body language, along with tension, humor, and boredom. We saw Representative George Santos, R-N.Y., alienated by his peers in the wake of reports that he fabricated his biography.2 Representatives Alexandria Ocasio-Cortez, D-N.Y., and Paul Gosar, R-Ariz., polar opposites on the political spectrum who share a hostile relationship, were engaged in a friendly conversation.3 And Representative Mike Rogers, R-Ala., had to be forcibly held back during confrontation with several of his colleagues.4 These were scenes rarely seen outside the chamber, as they occurred out of frame of the cameras traditionally used in the House.

Representative Mark Pocan, D-Wis., said C-SPAN’s coverage was “worthy of an Oscar.”5 Comedian Jon Stewart called it “the best season … ever.”6 Now that Representative Kevin McCarthy, R-Calif., has been elected speaker and the House has adopted its rules, C-SPAN’s cameras are no longer allowed in the chamber.7 So, should C-SPAN be allowed greater camera access on the House floor?

Cameras in the House of Representatives

The Cable-Satellite Public Affairs Network (C-SPAN) was created in 1979 as a nonprofit public service from cable providers in cooperation with Congress. This marked the first time cameras were installed in the House and video was regularly broadcast. Previously, cameras were only occasionally allowed in the House for special occasions, the first live broadcast being the start of the 80th Congress on January 3, 1947.8

C-SPAN offers 24-hour programming and covers both chambers of Congress, namely their public committees, floor debates, and final votes. It aims to “promote open and transparent dialogue between the public and their elected and appointed officials—and those campaigning for office.”9 C-SPAN also covers the executive and judicial branches, though it does not have access to the Supreme Court chamber.

Although C-SPAN taps into the House feed and broadcasts it nationally, it does not control the cameras used to shoot the footage. Those are owned and operated by the federal government. According to House rules from when cameras were first installed, they are restricted to “head-on shots of members at the podium and committee tables and they are prohibited from taking reaction shots or shots of the chamber.”10

Two angles typically broadcast by C-SPAN from government-operated cameras: a wide shot showing the full speaker’s dais and a medium shot of a representative delivering a speech.

Additional cameras from C-SPAN and the press pool (ABC, CBS, NBC, CNN, and Fox) are allowed on the floor only for major events like the State of the Union and joint sessions of Congress.11 They are, however, routinely allowed outside the chamber—throughout the Capitol building, on the grounds outside, and nearby in congressional office buildings.

Representative Pocan introduced the Leave the Cameras On Resolution, calling on the House to allow C-SPAN to operate its own cameras and film freely within the chamber, just as it did that first week of January.12 The resolution has been cosponsored by more than 20 House Democrats.13 “If this truly is the People’s House, Americans deserve to see the inside of that House,” said Representative Pocan. “There’s nothing wrong with more transparency and sunlight. This change will hopefully encourage more Americans to be interested in government and embolden some to even run for elected office.”14

A similar amendment to the rules was introduced by Representative Matt Gaetz, R-Fla., who was one of 21 House Republicans whose objections to McCarthy drew out the speaker vote. “Last week, America watched in real time how our government is functioning,” said Representative Gaetz. “Broader transparency in Congress is a net positive, and we need more of it.”15 His amendment would allow at least four C-SPAN cameras in the chamber, updating what he calls the “antiquated and a little boomer-fied” camera angles that have not changed in decades.16

Representative Chip Roy, R-Texas, praised how the cameras showed the “inner workings” of government and provided a “good thing for our democracy.”17 Supporters like him argue that viewers gain invaluable insight from coverage that highlights bipartisanship and relationship-building—key tenets of Congress’ work. Elected officials would also be held accountable for what they do and how they interact with each other, as their actions would be visible to the public eye.

C-SPAN has previously asked Democratic and Republican speakers of the House for greater access to the House floor, but its requests have been rejected.18 Robin Newton, a spokesperson for C-SPAN, drew upon the compelling coverage of the speakership to make the case for broader access. “Allowing C-SPAN into the House chamber allowed Americans to get a better understanding of how Congress operates, learning from different, rarely-seen camera angles,” she said. “We certainly hope to gain greater access to at least key legislative proceedings.”19 Similar request have also been made to Senate leadership.

Critics say that additional cameras are not needed, as there is already an abundance of congressional coverage, both inside and outside the chambers. Would more cameras actually draw in more viewers? More cameras do not necessarily mean more content, or even more care for what is being streamed.

Right now, the only cameras within the House are owned and operated by the federal government. If C-SPAN is permitted their own cameras, would other news organizations be allowed the same privilege? What would the criteria be for determining who is granted access? Could the next Democratic speaker allow MSNBC exclusive access or a Republican speaker allow only Fox News in the chamber?

In showing Congress “behind the scenes,” viewers would get a glimpse of the mundane and unflattering sides of government. Lawmakers could be seen having private conversations, yawning, or texting on their phones in the background. There is concern that these types of “gotcha!” moments could be manipulated and disseminated to make someone look bad and serve a political purpose.

There is also the question of how representatives would react to constantly being on camera. Would it lead to better behavior or more disruptions and disorder? Members might turn to stunts and spectacles to play to a base audience, gain attention, and go viral online for attention or fundraising. A push for greater transparency could even backfire and lead to more secrecy if members decide to conduct their business—deals, negotiations, and conversations—in more private settings away from camera lenses.

Although action has yet to be taken on these resolutions and requests, a spokesperson for Speaker McCarthy said he is “exploring a number of options to open up the People’s House to ensure a more transparent and accessible Congress for the American people.”20