Biden’s Student Loan Forgiveness: Too Much, Not Enough, Just Right, or Beyond the President’s Authority? 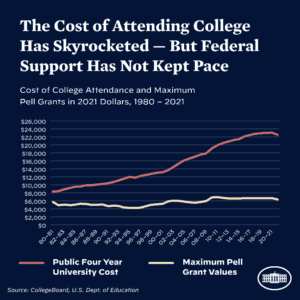 In August, President Joe Biden’s administration announced a student loan forgiveness plan which would cancel up to $10,000 in debt for most borrowers and up to $20,000 for some borrowers.1 Current federal student loan borrowers who earn less than $125,000 per year (less than $250,000 per household) can have up to $10,000 forgiven and those who received Pell Grants can have up to $20,000 forgiven.2 Pell Grants are a type of federal financial aid for undergraduates who demonstrate the most need.3 As many as 43 million Americans could see their debt reduced through this plan.4

The plan is currently being challenged in court by several Republican state attorneys general. These states are arguing that President Biden is overstepping his authority and that the plan may harm some private lenders “because it would prompt millions of borrowers … to consolidate their debt into the main federal student program.”5

In addition, 22 Republican governors have argued that the plan is unfair to those who have already paid off their debt. “For many borrowers, they worked hard, made sacrifices, and paid off their debt,” wrote the governors. “For many others, they chose hard work and a paycheck rather than more school and a loan. Americans who did not choose to take out student loans themselves should certainly not be forced to pay for the student loans of others.”6

Democrats, including members of the Biden administration, have pushed back against these arguments. “Let’s be clear about what they would be trying to do here: The same folks who voted for a $2 trillion tax giveaway for the rich and had hundreds of thousands of dollars of their own small business loan debt forgiven would be trying to keep millions of working middle-class Americans in mountains of debt,” said White House spokesperson Abdullah Hasan.7

However, the Biden administration is also receiving pushback from members of its own party who believe the plan does not go far enough. For example, campaign strategist Angelo Greco said, “It’s a small, small addition. … I just don’t see how anyone who has been pushing for at least $50,000 and citing all the racial equity stats as motivation to do it can be thrilled about something that scratches the surface of a systemic crisis.”8

“We think roughly 20 million people will be debt-free,” said Thomas Gokey, an organizer with the Debt Collective. “For many others this will do very little. We have more work to do.”9 For his part, Senator Bernie Sanders, I-Vt., called the move “a big deal” but added he believes “we have got to do more” to make higher education more affordable, such as making public colleges tuition free.10

It is not clear how the courts will rule on the various challenges being raised against the plan, but it is clear that this issue will be on voters’ minds during the midterms and other elections to come.

Join Us! On November 16, Close Up will host a free online panel discussion about student loan forgiveness and the costs of higher education (register here). The webinar will be followed by a reflection session for students from across the country to share their views on this pressing issue (register here).

One thought on “Biden’s Student Loan Forgiveness: Too Much, Not Enough, Just Right, or Beyond the President’s Authority?”

« Despite White House Push for Updated COVID-19 Boosters, Americans Are Slow to Roll Up Their Sleeves
Back to all Posts
Will the Supreme Court End Affirmative Action? »