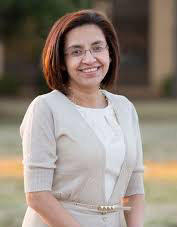 Verenice Castillo’s devotion to her community took her from being a Close Up student in front of the White House to being a dinner guest at the White House.

All of Castillo’s concerns about being in a new country were put to rest after her experience on Close Up’s Program for New Americans (PNA) in 1994. Through Close Up, Castillo realized that she was not the only student to feel apprehensive about being in a new place, and that other students were also having difficulties feeling accepted. By the end of program, she and her peers understood that being an immigrant was not a limitation, and that they would be able to represent themselves in their new home. 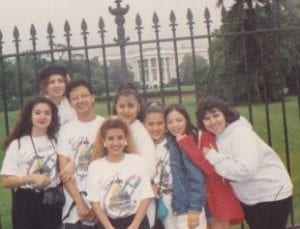 Throughout the week, Castillo was full of excitement, and her heart was warm from connecting with other students. From the Close Up welcome event to the closing dance, she felt welcomed and comforted by both participants and staff. Many of Castillo’s memories of Washington, D.C., are fused with the memories of the people she met during her trip. She remembers visiting the White House for the first time, and how incredible it felt to see it in person. Yet she can’t think of her first visit to the White House without thinking of the friends that she took pictures with. She felt linked to the other students, since they were all experiencing these new sights for the first time together. Even simple memories, like being on the bus, were shaped by her program instructor dancing in the aisles and singing “What Is Love?” by Haddaway. To this day, she can’t hear the song without remembering her Close Up experiences and feeling overwhelmed with positive emotions. 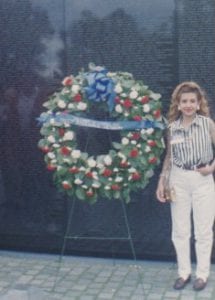 By learning about the democratic process in Close Up lessons, Castillo quickly recognized the variety of ways in which she could participate in government. She was grateful for all of the opportunities ahead of her, and for the fact that her rights were protected. Using what she learned through Close Up, Castillo easily passed the citizenship test, and she was eager to become the best citizen she could be. To her, that meant constantly finding ways to inspire others to get involved, in the same way Close Up inspired her. At the end of the week, she promised herself that she would always do whatever she could to give back to the United States as a thank you for the opportunities afforded her as a citizen. 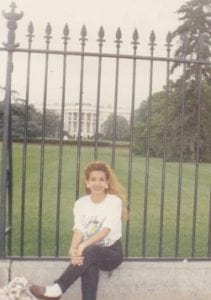 As a result, Castillo has dedicated her life’s work to helping others. Early in her career, she volunteered with the Air Force, where she mentored military spouses. Simultaneously, she took night classes to earn her Bachelor’s Degree in social psychology. Castillo learned that some problems are common in military families, such as feelings of isolation, depression, being overwhelmed, and post-traumatic stress. Through her volunteer work, she strove to continuously develop more programs to prevent negative situations, and to improve other areas of military life, including reintegration, resilience, education, employment, and peer-to-peer mentorship. In 2013, Castillo won the Armed Forces Insurance Air Force Spouse of the Year Award, which gave her a platform to boost her advocacy for positive changes in support programs. As more people wanted and needed help, the programs expanded. Eventually, demand for the programs exceeded the capacity of the Air Force and the Pentagon. High-ranking military spouses asked Castillo if she would consider starting a nonprofit, as doing so would provide the programs with the capacity to grow and to influence more lives. Although Castillo had some hesitations and worries about starting a nonprofit, her passion to give back to her community pushed her forward. 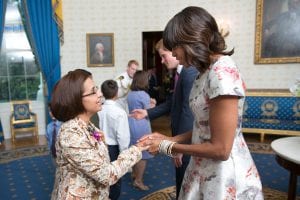 By doing what is right and seeking to inspire others through advocacy, Castillo has built a community that generates much-needed support. Castillo has always been a giving person, but Close Up empowered her to act on her innate characteristics. Through this desire and by expanding her impactful work, Castillo has been honored in a number of ways. When she was a student outside the White House, she never dreamed that she would later return as an honored guest of First Lady Michelle Obama during the Military Spouse Appreciation Day Tea. Being at the White House as an honored guest, Castillo reminisced on her time as a student in D.C. and thought about the impressive transformation that she had achieved.

In her current role as the CEO and president of the Military Spouse Advocacy Network (MSAN), Castillo leads a team of approximately 130 volunteers in mentoring and supporting military spouses across of all five branches of the military, including the National Guard and Reserves, around the globe. There are close to 1,000 new military spouses being mentored at the moment. MSAN focuses on creating a smoother transition from civilian to military life through the sharing of first-hand experiences and the creation of a community of men and women facing similar challenges. A large part of this effort is fulfilled by the Peer to Peer Mentorship Program, which trains diverse seasoned military spouses to encourage and mentor new spouses. This program creates a cycle of support for spouses, which will carry the mission long into the future. Not only does MSAN seek to help spouses on a systemic level, but Castillo has maintained her passion for personally making a difference in people’s lives. Castillo feels blessed to be the CEO of MSAN, and she still travels to the San Antonio Air Force Base every Thursday so she can directly impact military spouses and significant others. 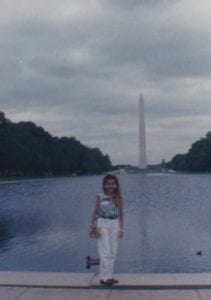 In what other ways do you engage with your community?

I work on the Military Affairs Committee for the San Antonio Chamber of Commerce. We meet once a month to talk about what we can change within our community, and how we can provide more support to the city and to the military. I feel blessed to have the opportunity to work with amazing leaders and support the city of San Antonio and its initiatives, such us the amazing “Military City, USA (Trademark),” which comes with a lot of responsibility to support our military community. Our committee works on generating and attracting employment opportunities for former military personnel and providing military spouses a stronger family support and career and employment opportunities. We also look for other programs within the city to continuously support military members throughout their lives. It’s great to be able to support military families through the beginning and end of their military experiences, and for San Antonio to live up to its title of “Military City, USA (Trademark).”

What is one thing you wish someone would have told you before starting a nonprofit?

If you feel the drive to make a change in the world, and you want to make a difference, don’t lose that passion. I often feel like I am always working and always trying to solve something, and it is a large commitment and takes a lot out of you. Make sure that you do research before starting your own nonprofit; there may already be something out there that is similar to what you want to accomplish. Take some time to learn about their mission and bring your new idea to them to see if you can collaborate, instead of trying to reinvent the wheel. If you do make the decision to start your own nonprofit, also make sure that your family and the people around you are ready for that change, and are willing to take that step with you. Create boundaries to keep yourself from working too hard, and make sure that your loved ones are taken care of before you dive into long work days and answering emails while on vacation.