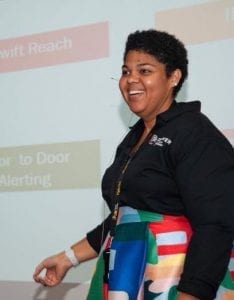 Participating in Close Up was the first time Loaitza Esquilin-Garcia traveled without her family, and her first experience on an educational trip. When her brother attended a few years before her, she was not sure why middle schoolers could not attend. Her family emphasized the importance of building her language skills and doing well in school so that she would be prepared for the trip in high school. They emphasized her studies because at Francisco C Urgell High School in Puerto Rico, students were required to be in the advanced English class to attend the trip. Her family made a lot of sacrifices and worked very hard to offer her growth opportunities like Close Up throughout high school. It was eye-opening to be away from the island and see big cities, while learning in an educational and fun environment.

Esquilin-Garcia specifically remembers a Close Up exercise where students debated whether or not Puerto Rico should be independent, fully incorporated as a state, or something in between. She remembers everyone debating the pros and cons and arguing for their side. At the end of the exercise, students were asked to vote on Puerto Rico’s status, and in this particular simulation it remained a United States territory. While she and her friends were disappointed in the outcome, she realized that all of the students involved came from very different backgrounds, so it was difficult for them to understand her point of view. The exercise gave her the opportunity to inform students about life in Puerto Rico and her personal perspective in regards to the island’s status. Seeing their differences and being able to converse with students from midwestern states in a productive way left a lasting impact on how Esquilin-Garcia has spread awareness throughout her career. 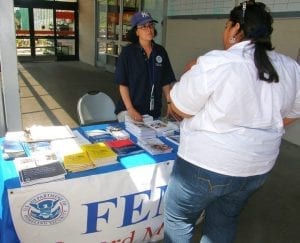 While working for FEMA, Esquilin-Garcia traveled all over the United States for 2-7 months at a time, and she was only able to return home every 6-7 months. She loved seeing the parts of the country that are under appreciated and less traveled. During her time with FEMA, she spent the longest amount of time in New York state when the area was hit with multiple weather events in a row. From New York City, to upstate and Long Island, she helped victims with insurance claims, gathered statements, and taped the impact of natural disasters. Speaking with victims firsthand was very difficult. Her heart broke as she stood with home owners watching their house float downstream and talked with victims who were not sure where they were going to go after losing everything.

When Colorado was hit with a series of floods in 2013, Esquilin-Garcia was assigned to the area to work as a bilingual Public Information Officer. While in Denver, she fell in love with the atmosphere, people, and culture. She never imagined leaving Puerto Rico, but after visiting, she imagined herself living there and making a new home for herself. During this phase of life, Esquilin-Garcia learned to talk victims through the process of recovery and learned to be diplomatic in communicating insurance policies. It was difficult for her to reconcile official policy with the help that people actually needed that in that moment. She learned to build bridges, foster relationships with people who were in a position to make a difference, and prepare herself to make a greater impact. While she knew that her work was critical, it was difficult for her to continue being on the front lines. She worked hard to move to Denver and now she is the Public Information Officer at the Denver Office of Emergency Management (OEM). Esquilin-Garcia is the first Public Information Officer for this office since its founding in the 50’s. 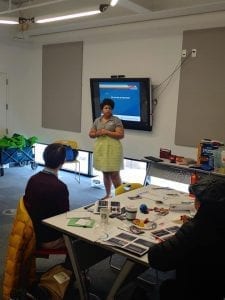 As the Denver OEM’s Public Information Officer, Esquilin-Garcia leads a team of diverse individuals by balancing various strengths and weaknesses so the team can achieve their best outcome. Her current role requires a lot of strategic thinking and flexibility, but also a lot of empathy. On one hand, there are a lot of regulations and policies to follow, and decision making that involves understanding key stakeholders. On the other hand, working with victims and communicating effectively requires knowing your community and hearing their concerns. She also strives to create a multilingual office, humanize government policy, and target individuals of all socioeconomic backgrounds to learn more about how they can build an emergency preparedness kit that fits their budget. For example, OEM started marketing “swag with a purpose,” where each promotional item they produce can also be added to an emergency kit or used during an emergency.

Throughout her career, Esquilin-Garcia has continued to prevent negative outcomes for her community, and has done her best to provide them with what they need if a bad situation does arise. She continues to engage with her community, continues to learn more about her own role to create change and maintains focus on improving policy to positively impact the system she works in, and the people around her.

CU: What would people find surprising about your day-to-day?

LEG: The Public Relations Association often sends college students to our office for a mentorship day, and they are always surprised with how rapidly the day picks up. One minute I am monitoring social media for alerts, checking emails, filing papers, and the next minute I am setting up a Joint Information Center to manage the communications for an entire city. If we go from a “blue sky” status to a “gray sky” status, operations ramp up from 0 to 1,000 very quickly. We are reaching out to other offices, setting up press conferences, writing talking points, and advising residents on how to prepare. In some cases, we may think a storm is coming and won’t hit us directly, but the forecast can change within an hour.

CU: Where does your drive for continued education and engagement come from?

LEG: I always like to learn. I think that if you don’t strive every day to be better at what you’re doing, then something might not be going right. At OEM, we are in the business of preventing the loss of life, and I take that very seriously. So, if I am going to understand my community, I need to get involved and truly understand what they need. I am the President of the University of Southern California alumni association for the area, which helps students in the area gain scholarships to the university. I also volunteer with the Special Olympics in Colorado and with the Latino Leadership Institute. I want to be an advocate for both of these groups and empower individuals to be the best they can be.