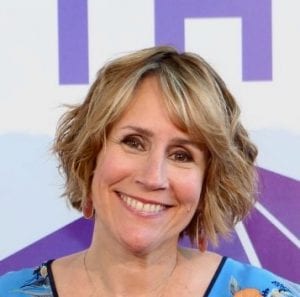 On Close Up, Lara Bergthold remembers being with students from other schools and learning about their backgrounds. She remembers visiting Washington, DC, being at the monuments, staying in a hotel, and hearing from speakers. But Bergthold was most excited to hear from women working in DC, and coming to understand all of the barriers they overcame to be in their positions.

As a young girl, Bergthold began school abroad with her younger biological and adoptive brothers, one of whom is Ecuadorian and was adopted in Ecuador. Her parents were international aid workers in Ecuador and Nicaragua; the siblings grew up learning both English and Spanish. When Bergthold’s family returned to America when she was six, her younger brother was given a test to assess his grade level in order to acclimate to American norms. When her brother did not perform up to expectations for his age, Bergthold’s parents asked for more information about the placement test. Upon closer examination, her parents realized that many of the terms used in the test, such as “monkey bar” and “sidewalk,” were not familiar to their children, as their experiences abroad had been different than those of children in the United States. The experience provided Bergthold with an early sense of how immigrant children could be discriminated against.

As a high school and college student, Bergthold’s goal was to work in Washington, DC. She wanted to be one of the women making a difference and to expand the influence of women in the nation’s capital. Her ambitions led her to become an intern in her local congressional office and to spend a summer living in DC. To create a career path in politics, she began studying for the GRE in order to attend graduate school for public policy. While sitting in the parking lot of the GRE testing center, she heard Anita Hill testifying in the confirmation hearings for Clarence Thomas, who would become a justice on the Supreme Court. Bergthold thought about the process and the questions being asked. Frustrated with the way the case had been handled, she realized that she wanted to work outside of DC—to bring change by pushing to ensure that more women were elected to federal office.

After entering the Kennedy School of Government at Harvard University, Bergthold worked for a summer in the Clinton White House and with Eli Segal’s office, where she helped launch AmeriCorps. While working in the administration, she built a reputation as a hard worker and a reliable colleague. As a result of her work, she was able to maintain her relationships in the office long after she moved on to her next step. Months later, she received a call from Segal, who asked, “What are you doing for your country?” In that conversation, she learned that Wesley Clark’s presidential campaign was in need of a national political director, to be based in Little Rock. She took the opportunity and jumped into the chaos of campaigning. When Clark eventually withdrew from the race and endorsed John Kerry, Bergthold moved to the Kerry campaign as deputy national political director.

Bergthold says that working on a campaign helps a person develop a variety of skill sets, including field work, fundraising, messaging, conducting opposition research, and counting delegates, in an intense way. During her time on the campaign trail, she met and networked with many people who would go on to do all sorts of valuable work. The people she met in the early years of the Clinton administration and on the Clark campaign are her closest friends to this day.

Throughout most of her career, Bergthold also worked on and off for the longtime television producer Norman Lear, a dear friend and mentor. For 20 years, she served as the executive director of the Lear Family Foundation, where she saw first-hand the importance of having access to democratic processes through the Declaration of Independence Road Trip. This project involved exhibiting an original copy of the Declaration of Independence in all 50 states, coupled with a voter registration push. Bergthold also served as a board member for the Campaign for America’s Future. Through her work with Lear, she learned much about maintaining a passion for political change, and about the importance of interpersonal relationships. Today, she keeps this connection as the chairperson of the board for the People for the American Way, founded by Lear, the late Representative Barbara Jordan, and a group of business, civic, religious, and civil rights leaders. Bergthold is also a board member for Rock the Vote and serves on her son’s elementary school board.

As a principal partner at RALLY, Bergthold currently serves as a campaign and communications strategist. With RALLY, she has had the privilege of working on campaigns for LGBTQ rights, the March for Our Lives movement, women’s issues, the Time’s Up movement, and most recently, public education and homelessness issues in Seattle, San Francisco, and Los Angeles. She says that the more than 60,000 people experiencing homelessness in these cities, as well as the fight for social equality, are the big drivers that keep her moving. For Bergthold, it’s a privilege and a pleasure to support her clients and figure out what she can do to help them reach their goals. She says she is never sure what will happen in a day, and the constant need to adapt keeps her energized. Between her hard work at RALLY and her commitments to the organizations and people she is passionate about, Bergthold has dedicated herself to making a difference in her community.

What is one of your proudest accomplishments?

I am truly excited by all of the campaigns we work on, and I am lucky enough to have some incredible partners and clients in the movements that RALLY is dedicated to supporting. A moment that really felt like a win for me was through our work on marriage equality when the Supreme Court made the decision to legalize same-sex marriage. We worked very hard to make marriage equality the law of the land, and although it was accepted in some places, we wanted it to be accepted everywhere. As soon as we got word of the decision, we rushed our plaintiffs, Paul and Jeff, down to the courthouse to apply for a marriage license. The clerk hadn’t heard the ruling yet, and initially said they couldn’t approve it. We quickly got the Attorney General Kamala Harris on the phone to verbally confirm that it was okay to approve the license. Everyone was high-fiving and hugging because this couple was so happy to be married. Plus, we had a wedding to celebrate! It was really an amazing day because it was such a victory for the movement and our two plaintiff couples.

Throughout your career, is there anything you wish you would have done differently? Why or why not?

I haven’t left much on the table. Every decade or so I do a bit of self-analysis, asking myself, “Am I where I want to be?” and it’s always felt right. Of course, I had a few decisions that didn’t pan out but the mistakes you make from your career path are never a mistake if you learn from them. Mistakes make you a stronger, smarter, and more thoughtful person. If I ever felt like I wanted to do something, I went out and made it happen.

What advice do you have for students who may want to pursue a career similar to yours?

The relationship piece is important. Identify potential mentors early and stay connected with the people you come into contact with. I feel I have a dozen mentors in different industries. Look for people who will be there for you, support you, push you, challenge you, and offer you opportunities along the way. Sometimes the person who is an intern now will one day run for office. The people you meet in the beginning are important in the end, and it’s important to treat everyone with respect from the beginning. Keep these relationships strong throughout your life and always look to broaden them.