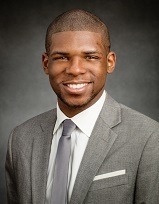 Jaylin D. McClinton has been a fervent believer in civic engagement and social justice for as long as he can remember. As a Community Organizer for the Obama Foundation in his hometown of Chicago, IL, he puts his convictions into practice every day. Going into the local community regularly to talk to residents directly, he is responsible for raising awareness about the Obama Presidential Center (OPC) at the hyper-local level.

His participation in the 2012 Civics and Law Academy, a partnership between Close Up and the American Bar Association (ABA), inspired him and served as an important step in his journey toward a career in public service. McClinton initially learned about Close Up as a result of a college admissions interview for Harvard College. His interviewer worked for the ABA and recommended that he apply. The experience opened a window to a world beyond the South Side of Chicago for McClinton. His exposure to government officials and institutions included meetings with United States Senator Sheldon Whitehouse (RI), Former Chief Judge Royce Lamberth of the U.S. District Court for the District of Columbia, and both federal prosecutors and public defenders.

Moving on to undergraduate studies at the flagship institution in his home state, the University of Illinois at Urbana-Champaign (UIUC), McClinton had a vision for his future. He majored in both African-American Studies and Political Science with a Pre-Law Concentration, looking ahead to a career at the intersection of politics, government, and law. He was also enthusiastic about immersing himself in the wide array of academic and extracurricular experiences available to him, like the Minority Association of Future Attorneys (MAFA) and the Illini Union Board (IUB). In addition to volunteering for statewide political campaigns in Illinois, he ran a successful campaign of his own in 2015 to win a seat as the Urbana-Champaign Student Trustee on the University of Illinois Board of Trustees. His election along with two other Black students in Chicago and Springfield marked the first-time in history that all three campuses were represented by someone of African descent. Because of this, McClinton made a priority of building coalitions between UIUC and other institutions of higher learning in the state to tackle issues related to college affordability, diversity, inclusion, and equity.

After completing his undergraduate studies in May 2016, McClinton worked as a Reuss Fellow at the University of Illinois Foundation (UIF) and eventually secured an internship in the Obama Administration in the Office of Management and Administration. His role in the White House brought him back to the DC area four years after his initial Close Up experience. Taking on an active role in government, his enthusiasm for public service was put into action on a daily basis. He brought humility to the work, diligently approaching large and small tasks alike with equal attentiveness.

Mr. McClinton spoke with us from Chicago.

CU: Can you describe some of your experiences working on political campaigns?

JM: I developed a passion for campaign work while volunteering in college. In 2014, then-State Senator Michael Frerichs announced that he was running for Illinois State Treasurer. Having worked in his district office as an intern, I was excited to join the campaign. That was my first experience being an active volunteer, working on a team that contacted voters and recruited volunteers. A field operation, the day-to-day mobilization of people, is the engine behind all campaigns. I was primarily motivated by Mr. Frerichs’ vision for progress in Illinois and proud to be part of the team that went on to win the third closest race in Illinois history.

That success helped build my confidence in my capability to mount my own campaign for Student Trustee. The lessons I learned on the campaign trail about mobilization and communication were invaluable. I was fortunate enough to build and win with the support of a diverse coalition of students. Those early experiences drove me to continue organizing–next for Daniel Biss in his short bid for Illinois Comptroller, and eventually for Hillary Clinton’s 2016 presidential campaign.

CU: How have you remained engaged as an alumnus of educational programs and institutions with which you have been involved?

JM: I bleed orange and blue! As a proud University of Illinois alumnus, I look for every possibility to further advance the university’s mission. Typically, I try to get to the Urbana-Champaign campus at least once per quarter serving on various alumni boards. The Civics and Law Academy is one of the programs that laid the groundwork for me to accomplish several major goals, so I feel a deep obligation to pay it forward for the youth that come after me.

JM: Citizenship means using the skills and resources each of us develops to get off the sidelines and get active in our communities. Being active includes knowing your neighbors, exercising your right to vote, and freely assembling to make your voice heard in the public arena. Organizing community members to make change is needed at every level. I would encourage people to make an effort to connect with their neighbors. Strong blocks make strong neighborhoods and strong neighborhoods make strong cities. This model applies at the national level as well, and it starts with taking the time to listen and get to know our fellow neighbors.