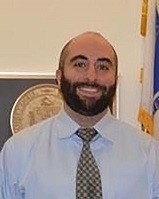 Geoff Browning knows his way around the Capitol Building, having worked since 2010 in the House of Representatives. He currently serves as a Legislative Aide for Katherine Clark, Representative for the Massachusetts 5th Congressional District, with a policy portfolio that includes education, defense, foreign affairs, and homeland security. Rep. Clark’s office is lined with block printed scenes from towns in the district, including Cambridge, Lexington, Medford, and Revere. Browning is especially proud of his past work for other members from the Bay State, including Rep. Jim McGovern and former Rep. Barney Frank, and cares deeply about finding policy solutions for Massachusetts.

In 2015, he founded the Italian American Congressional Staff Association and still serves as President. Beyond his success in the House, Geoff has been profiled in the Capitol Hill newspaper, Roll Call, as the lead vocalist in the DC-based band, Of Tomorrow.

Browning participated in 2004 and 2005 Close Up programs as a student from Archbishop Carroll High School in Radnor, PA. He enthusiastically recalls his junior year civics teacher, Mr. Garbacz, encouraging him to take part in the Washington, DC trip. During high school, Geoff spent a lot of time on the road driving between his adopted home in the Philadelphia suburbs and his native Massachusetts to visit family members along the East Coast. Through long stretches of highway, he often pondered the transportation policy undergirding the bridges he crossed along the way. Recognizing a budding interest in public policy, Browning found a spark of inspiration in his Close Up experience to pursue a career serving in government.

He recalls memories like a sign advertising “Free Shoes” on an attorney’s door as his Close Up workshop walked the halls of the Department of Agriculture. The pair of cordovan shoes he received still serves as a reminder of that day. He speaks emphatically about the passion kindled in his first moments in the House chamber, feeling that it was exactly where he needed to be. The Close Up experience provided Geoff with “a jumping off point to dig in and learn more” about the legislative process.

We sat down with Mr. Browning to discuss his Close Up experience and its influence on his career:

CU: How did your program experience influence your growth as a citizen?

GB: I was fortunate to go on the trips. We met with my senator from Pennsylvania. He was very gracious. He spent time with us both years and took photos with us. However, I decided as a result of our meetings not to vote for him and I think that was a great exercise in democracy.

CU; How did your Close Up experience influence your career path?

GB: When you’re a kid coming up through high school, these concepts are very abstract. They didn’t come alive until I saw them with my own eyes. Close Up makes them specific and awakens passion for a lot of people. It certainly did for me. I understood where to target my efforts for a career.

CU: Does the mission of the Close Up Foundation resonate in policy discussions today?

GB: Yes, many citizens have difficulty understanding how the processes of governance affect their daily lives. That leads to apathy, isolation, and a breakdown in collective decision making. These are symptoms of the current crisis in civic education. When Congress reauthorized the No Child Left Behind Act in 2015, many in the majority wanted to eliminate a lot of targeted grant funding streams for particular aspects of public education. One of the only areas of bipartisan agreement was keeping grants for civics education, which is a good start, but we still have a lot of work to do. Close Up has an important role to play in rebuilding a healthy civic culture.

CU: What does citizenship mean to you? Have new media forms affected the role of citizens?

GB: The challenge that comes along with U.S. citizenship is to be an informed participant in civic life. That challenge is even greater in the digital age. It has become more difficult for discerning citizens to parse through online media for good information. Whatever the struggles may be in our lives, on top of that there’s the added struggle of understanding how policy impacts your life. It’s an enormous individual responsibility.

CU: What are the next challenges or opportunities you are seeking in your career?